WATCH/FOLLOW LIVE
• This week’s games will be streamed live on BTN Plus (subscription).
• Links to streaming and live stats can be found at hawkeyesports.com/soccergameday.
• Fans can follow the Iowa soccer program on Twitter (@HawkeyeSoccer) for live in-game updates.

SCOUTING THE SPARTANS
• Michigan State finished the Big Ten slate with a 5-4-1 record in the conference, tying Iowa for fourth in the final standings.
• Ava Cook headlines the Spartan offense, leading the team in goals (seven) and points (17); Cook’s 70 shot attempts are the second highest total in the conference.
• Spartan goalkeeper Lauren Kozal was named first-team All-Big Ten. Kozal’s 75 saves at a .862 save percentage tops the league, while her goals against average (.679) and 4.41 saves are second in the conferencec. Kozal has earned Big Ten Goalkeeper of the Week honors twice this season.

SERIES HISTORY – MICHIGAN STATE
Iowa is 8-12-5 against Michigan State. The Hawkeyes fell to the Spartans 2-1 on Oct. 31 after allowing a pair of late second half scores. Iowa’s last win in the series was a 3-0 win at Michigan State in 2019.

RUN FOR THE POSTSEASON
The top eight teams in the final Big Ten standings have earned a berth to the Big Ten Tournament. Quarterfinal games on Oct. 31 include #8 Wisconsin at #1 Rutgers, #5 Iowa at #4 Michigan State, #6 Penn State at #3 Michigan, and #7 Ohio State at #2 Purdue. Winners will advance to the semifinals on Nov. 4, and the tournament culminates at the championship match on Nov. 7. The final rounds are hosted by the team with the highest remaining seed following the quarterfinal round. The Big Ten Tournament Champion earns an automatic bid to the NCAA Tournament, which kicks off its first round Nov. 12-14. 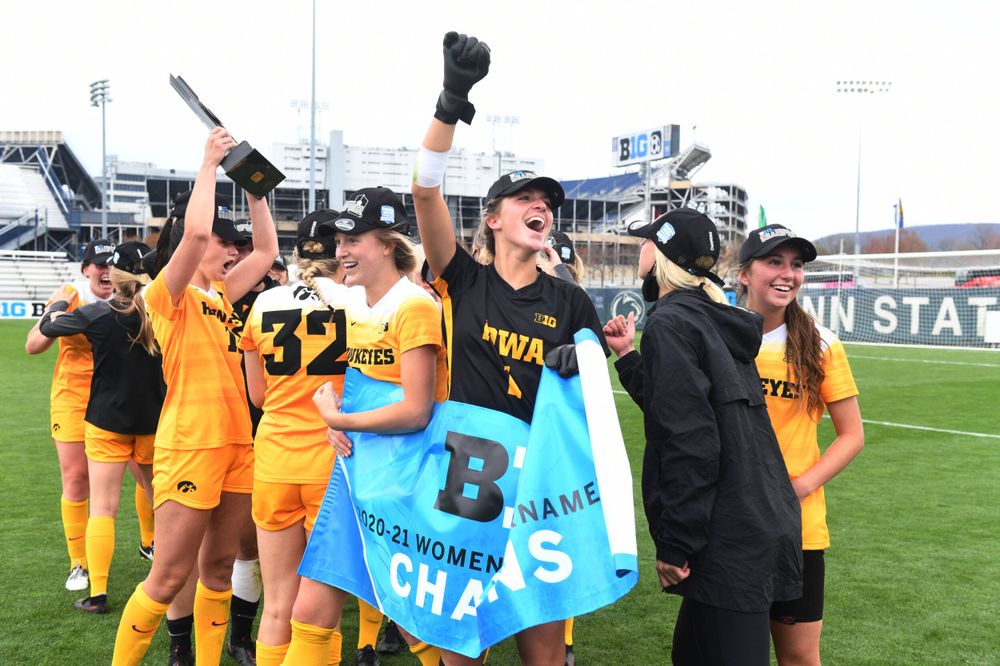 DEFENSE WINS CHAMPIONSHIPS
Iowa has posted six shutouts and held 16 opponents to two scores or fewer through 18 games. Redshirt junior Monica Wilhelm has notched 58 saves while allowing just 17 goals through 16 starts. Wilhelm tallied a career-best 11 saves against Rutgers on Oct. 10. Sophomore Macy Enneking has seen action in three games in 2021, including two starts. She has tallied 17 saves and allowed one goal in that span.

DIIANNI CLOSES IN ON MILESTONES
Iowa head coach Dave DiIanni earned his 300th career win on Oct. 21, a 1-0 win over Minnesota. DiIanni has spent18 seasons as a collegiate head coach, including 11 at Grand Valley State and seven-plus at the University of Iowa. DiIanni is now the third active Big Ten coach to reach 300 career wins, joining Nebraska’s John Waller (338) and Maryland’s Ray Leone (309). DiIanni has 79 wins at Iowa since becoming head coach in 2014. Ron Rainey is Iowa’s all-time leader in coaching wins with 80. DiIanni’s 31 Big Ten wins rank No. 1 in school history.

IOWA HAWKEYES NEED-TO-KNOW
• Five Hawkeyes earned Big Ten Conference postseason honors. Sara Wheaton was named to the All-Big Ten second team. Alyssa Walker and Hailey Rydberg picked up third-team honors. Addie Bundy was a unanimous selection on the All-Freshman team, and Riley Whitaker was one of 14 players to earn the conference sportsmanship award.
• Three Hawkeyes — Hailey Rydberg, Sara Wheaton, and Samantha Cary — were named to the
Big Ten Preseason Honors List. Iowa was picked to finish seventh out of 14 teams in the preseason
coaches’ poll.
• Seniors Sara Wheaton and Hailey Rydberg were voted team captains this season.
• Head coach Dave DiIanni is in his eighth season at the helm of the soccer program. Last spring, DiIanni’s team posted a 7-9-1 record, finishing the season on a red-hot postseason run that saw the Hawkeyes win the program’s first Big Ten Tournament title and reach the NCAA Tournament Second Round for the first time in school history. Iowa lost just one senior from that youthful squad heading into this season.
• Over the past two seasons, Iowa has made back-to-back NCAA Tournament appearances for the first time in program history.
• Last spring, the Hawkeyes lost two-time Iowa Offensive Player of the Year Devin Burns and veteran goalkeeper Claire Graves but discovered a group of new young playmakers as the season continued. Sophomore Meike Ingles closed out her rookie campaign with four postseason goals, earning Big Ten Tournament Most Outstanding Offensive Player honors. Sophomore Macy Enneking was named the conference tournament Most Outstanding Defensive Player, and was an unanimous Big Ten All-Freshman Team selection.
• Those two headline a group of impactful underclassmen this season, though the team also features a robust class of nine senior leaders anchored by midfielder Hailey Rydberg, who was a captain last season and voted the team’s Most Valuable Player. Senior Sara Wheaton is the returning Iowa Defensive Player of the Year.
• The Hawkeyes welcome nine newcomers in 2021, including seven freshmen and two graduate transfers. Courtney Powell was Iowa State’s top offensive weapon last spring, leading the team in points (8), goals (4), shots (29) and shots on goal (23). She is joined by Alyssa Walker, who scored four goals for Richmond last season and previously earned second-team Atlantic-10 All-Conference honors in 2019.

SHARING THE WEALTH
Eleven different Hawkeyes have combined for 30 goals this season. Fifth-year senior Alyssa Walker leads the way offensively with eight goals and 18 points. Forward Kenzie Roling has also put up six goals for 12 points of her own, while forwards Courtney Powell and Meike Ingles have scored three times. Defender Samantha Cary and midfielder Hailey Rydberg have each sank a pair of goals. Defenders Sara Wheaton, Natalie Massa, and Riley Burns, as well as forwards Maggie Johnston and Samantha Tawharu have each scored one goal apiece. Rydberg has tallied a team-best seven assists, while freshman Addie Bundy has totaled six assists. Iowa has outshot opponents 267-213 this season.

YOU CAN CALL IT A COMEBACK
Iowa orchestrated the largest comeback in program history on Oct. 14, erasing a 3-0 deficit at Nebraska on the road at Hibner Stadium and scoring four unanswered goals.
A goal in the seventh minute of action by Cornhusker Elenore Dale set the tone for most of the first half, and the Huskers took a 3-0 lead six minutes before the break off of a pair of scores from Sarah Weber.
Then, three minutes before the half, Sara Wheaton launched a perfect ball from midfield down to Alyssa Kellar who served the ball to Courtney Powell for a smooth Hawkeye goal.
Iowa continued to chip into the Husker lead when Hailey Rydberg drilled a penalty kick for Iowa’s second score four minutes into the second half to cut Nebraska’s lead to one. Iowa earned the equalizer at the 64th mark when Samantha Cary floated the ball into the box to set up a laser to the back-right corner of the net from Kenzie Roling.
History repeated itself with nine minutes to play, as Cary again sent a ball into the box to force a scrum, and Iowa’s leading scorer Alyssa Walker connected on a header and bounced the game-winner into the lower left corner to give the Hawkeyes the lead.

LAST WEEK
The Hawkeyes defeated Minnesota on Oct. 21 to earn head coach Dave DiIanni’s 300th career win. Kenzie Roling scored the game’s lone goal as sophomore Macy Enneking made five saves in her first start at goalkeeper. Then, Iowa took a 1-0 lead in the first half against Wisconsin on Sunday with an Alyssa Walker fastbreak goal off a terrific feed from Samantha Cary. The Badgers tacked on an equalizing score in the final minute of the first half, however, and the game finished in a 1-1 stalemate. The week was crucial for Iowa to lock up a tie for fourth place in the Big Ten standings, the program’s best finish since 1999, when the Hawkeyes placed third.