Notes: No. 9 Iowa to Face Minnesota & UCLA on Monday

THIS WEEK
The ninth-ranked University of Iowa women’s gymnastics team heads to Minneapolis for a tri-meet against Minnesota and UCLA on Monday afternoon. The meet will begin at noon (CT) from the Maturi Pavilion.

FOLLOW LIVE
• Monday’s meet will be televised live on BTN with Dean Linke and Olivia Karas on the call.
• Fans can follow along via live results at hawkeyesports.com or via Twitter (@IowaGymnastics).

WHAT YOU NEED TO KNOW
• The Hawkeyes moved up to No. 9 in the Road to Nationals rankings following their season-opening 195.950 against Eastern Michigan. Iowa moved up nine spots from a No. 18 preseason ranking. The No. 9 ranking is the second highest in program history, as the Gymhawks were ranked No. 7 during the 2021 season.
• Iowa posted a season-high score of 196.125 in its victory over Texas Woman’s University on Jan. 14. The Hawkeyes posted season highs on both vault (49.150) and floor (49.350).
• Prior to the Jan. 15 meet against TWU, Iowa sat in fifth nationally on floor, eighth on beam, 14th on vault, and 19th on bars.
• Junior JerQuavia Henderson was named the Big Ten Specialist of the Week on Jan. 10 for the first time in her career after winning two events (vault, floor) in the season-opening victory over Eastern Michigan.
• Henderson has won both the vault and floor competitions in both meets this season.
• Iowa was selected to finish third in the Big Ten Preseason Poll in a vote of the league’s 10 head coaches (behind Michigan and Minnesota). Henderson and sophomore Adeline Kenlin were tabbed as Big Ten Gymnasts to Watch.
• Iowa returns 15 letterwinners in 2022, including three All-Americans and four All-Big Ten selections. Iowa boasts a roster with seven seniors and 11 upperclassmen.

NOTABLES
• Fourteen gymnasts set season highs and two had career-bests in the Hawkeyes’ victory over Texas Woman’s University.
• Sophomore Adeline Kenlin won all-around with a season-best 38.800. She tied a career-high on vault with a 9.850.
• Sophomore Aubrey Nick tied a career-high on beam against Texas Woman’s, scoring a 9.825.
• The Gymhawks have scored 49 or higher in both meets on floor and beam.
• Iowa has had five gymnasts win event titles this season — Alex Greenwald (1), JerQuavia Henderson (4), Clair Kaji (1), Adeline Kenlin (3) and Allyson Steffensmeier (1).

ZIVAT STEPS IN
Michigan State transfer Linda Zivat posted a pair of top three finishes in her second meet as a Hawkeye. The Illinois native was runner-up on floor, scoring a 9.875 and she tied for third on vault with a 9.825. Zivat is competing for the first time as a collegian, as she missed her two seasons in East Lansing because of injury.

HENDERSON B1G SPECIALIST OF THE WEEK
For the first time in her career, junior Jerquavia Henderson was named Big Ten Specialist of the Week after scoring a 9.925 on vault and floor in the Hawkeyes’ win over Eastern Michigan.
• Henderson tied a career high 9.925 en route to her vault title. The junior has tied this score three times, placing ninth in program history. 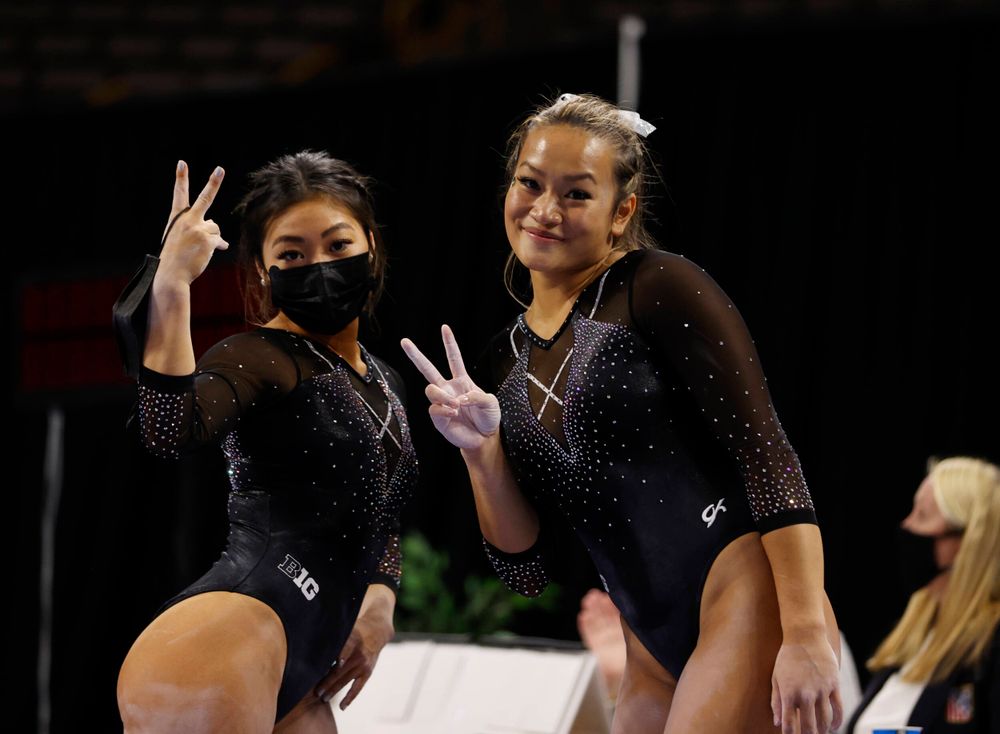 HAWKEYES RANKED TOP 10
The Hawkeyes posted a 195.950 in their season-opener against Eastern Michigan on Jan. 8. The score puts Iowa in ninth in the Road to National rankings, the second-highest ranking in program history. Iowa is one of two Big Ten teams in the top 10 along with No. 1 Michigan.

UP NEXT
The Hawkeyes will open Big Ten competition on Jan. 22, traveling to East Lansing, Michigan, to face Michigan State.