MINNEAPOLIS – Senior Lauren Guerin shared the floor title to pace the 16th-ranked University of Iowa women’s gymnast’s team Monday afternoon against Minnesota and UCLA at Maturi Pavilion. The Hawkeyes finished as the runner-up (behind Minnesota), scoring a 195.950.

Guerin tied with the Gophers’ Lexy Ramler on floor with a 9.925. The Hawkeyes had six top three finishes in the tri-meet and had eight gymnasts either set or ty their season-high scores.

“This place was packed. Minnesota is the defending Big Ten champions and UCLA is notoriously in the top five each year, with a lot of Olympians. I thought at first that maybe our gymnasts would be intimidated from the standpoint of not having fans last year to competing in a place where there was only standing room.”

“It was an amazing feeling, I could not have asked for a better way to start. In the first three events, they did a really good job, but in the last event maybe we got in our heads a little bit. It was unfortunate timing to have our first two starters go down. That is something we know we have to work on, but we now know we are capable to hang around the best in the country. We just need to be able to finish, and that is the difference between being good and being great.” 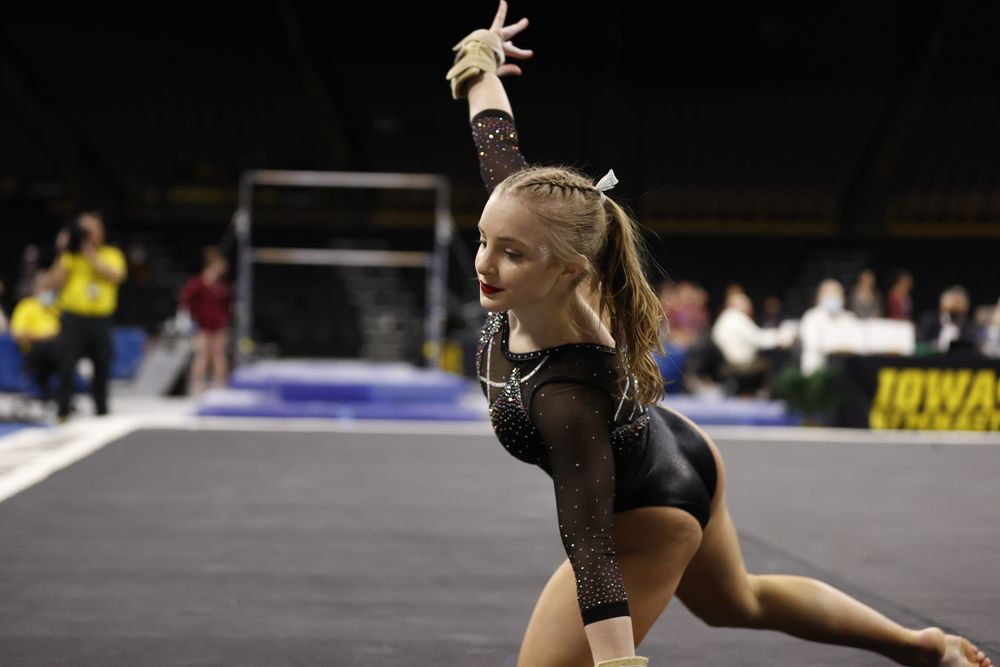 BEAM
The Hawkeyes started their first rotation on beam and scored a season-high 49.275 with two gymnasts placing in the top three. Senior Clair Kaji scored a 9.925 to post a season high and finish as runner-up. Sophomore Adeline Kenlin followed in third place with a 9.900. Senior Bridget Killian posted a season-best 9.850 and senior Allie Gilchrist followed with a score of 9.825 to tie her career-high. Senior Mackenzie Vance tied her season high for the second time, scoring a 9.775 and sophomore Aubrey Nick scored a 9.750.

VAULT
The GymHawks scored a 49.100 on vault with three gymnasts either setting or tying career-highs. Henderson tied for third place with a 9.875m while Kenlin tied her career-high for the sixth time, posting a 9.850 to tie for fifth place with Zivat, who had a new career-best 9.850. Killian scored a 9.825, while Guerin and sophomore Kendall Laplante had 9.700s.

ALL-AROUND
Kenlin was the only Hawkeye gymnast to compete in the all-around. She set a season-high with a 38.825 to place fourth.

UP NEXT
The Hawkeyes open Big Ten competition Saturday, traveling to East Lansing, Michigan, to face Michigan State. The meet is set to start at 6 p.m. (CT) and will be streamed live on BTN+.