THIS WEEK
The 16th-ranked University of Iowa women’s gymnastics team will host No. 29 Penn State in its home finale on Friday at 6:30 p.m. (CT) inside Carver-Hawkeye Arena. It is Senior Night and a Cancer Awareness themed meet. Admission is $10 for adults and youth are free. Tickets can be purchased at hawkeyesports.com.

FOLLOW LIVE
• Friday’s meet will be streamed live on BTN+ – a paid subscription service.
• Fans can follow along via live results at hawkeyesports.com or via Twitter (@IowaGymnastics).

WHAT YOU NEED TO KNOW
• The Hawkeyes are ranked 16th in the Road to Nationals rankings with an average score of 196.265. Iowa was ranked ninth following Week 1 — the second-highest ranking in program history.
• Iowa posted a season-high score of 196.825 in its home victory over No. 43 Nebraska on Jan. 29. The score ties the fifth-highest in program history.
• Junior Allyson Steffensmeier scored a career-high 9.925 on bars — the second of her career — against the Huskers. The score is tied for sixth-best in school history.
• The Hawkeyes posted a season-high score of 49.250 on vault in their first-place finish against Nebraska on Jan. 29. Iowa moved up six spots to No. 13 nationally on vault.
• Iowa scored a season-high 49.425 on floor in its victory against the Huskers, moving up two spots to No. 6 nationally on floor.
• Iowa sits 12th in the country on beam and 33rd on bars.
• The Hawkeyes have earned two Big Ten weekly honors this season. Junior JerQuavia Henderson was the Specialist of the Week on Jan. 10 and Marissa Rojas garnered Freshman of the Week honors on Jan. 25.
• Iowa was selected to finish third in the Big Ten Preseason Poll in a vote of the league’s 10 head coaches (behind Michigan and Minnesota). Henderson and sophomore Adeline Kenlin were tabbed as Big Ten Gymnasts to Watch.
• Iowa returns 15 letter winners in 2022, including three All-Americans and four All-Big Ten selections. Iowa boasts a roster with seven seniors and 11 upperclassmen.

NOTABLES
• The Hawkeyes set three season-high event scores and had four gymnasts win event titles in their victory against Nebraska on Jan. 29.
• Two gymnasts shared the event title on vault in juniors Linda Zivat and JerQuavia Henderson. Zivat’s score was a season-high.
• Iowa had four gymnasts tie or set a season-high on bars. Junior Allyson Steffensmeier posted a season-high and tied her career-best after scoring a 9.925 to take her second bar title of the season. Senior Clair Kaji scored a 9.850 to tie her season-high, while junior Elinor Rogers set a new season-high with a 9.800, along with Henderson, who tied her season-high.
• All six gymnasts who competed on floor scored a 9.800 or better. Henderson and senior Lauren Guerin posted a 9.925, senior Bridget Killian scored a 9.875, Zivat and senior Alex Greenwald both scored a 9.850, and freshman Marissa Rojas scored a 9.825.
• The GymHawks scored 49 or higher in three of the four events (bars, vault, and floor) against Nebraska.
• Sophomore Allison Zuhlke made her debut on vault, scoring a career-best 9.800 while debuting her “Zuhlke” vault as a Hawkeye.
• Iowa has had eight gymnasts win event titles this season — Alex Greenwald (1), JerQuavia Henderson (6), Clair Kaji (1), Adeline Kenlin (3), Allyson Steffensmeier (2), Lauren Guerin (2), Linda Zivat (1), and Marissa Rojas (1). 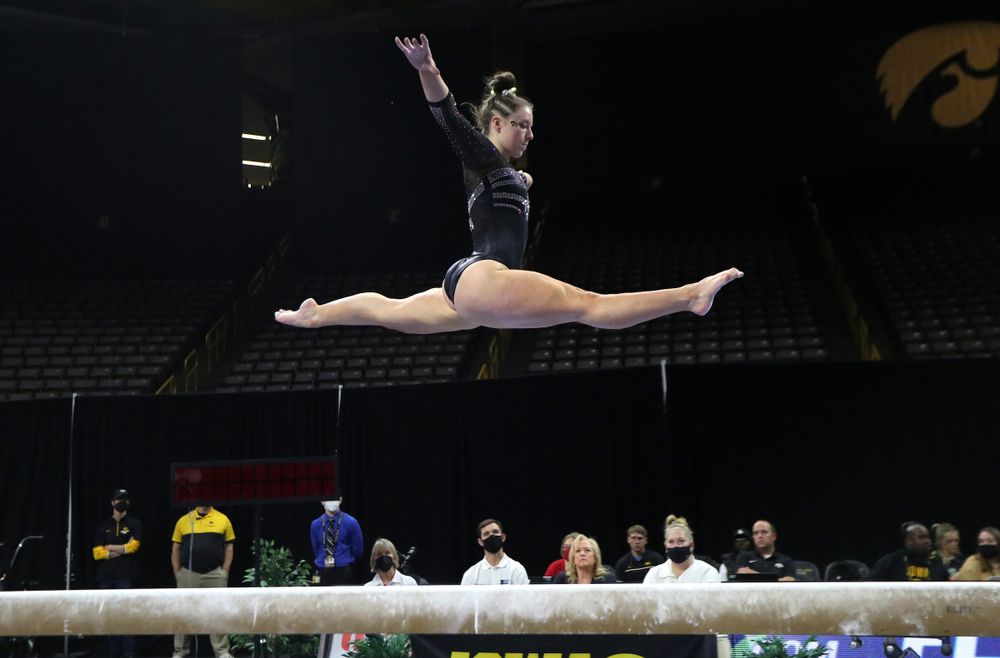 FLOOR QUEENS
Senior Lauren Guerin and junior JerQuavia Henderson have been consistently consistent on floor during the first four weeks of the season. The two gymnasts are both ranked in the top 20 in the Road to Nationals rankings. Guerin is No. 15 with an average score of 9.915 and Henderson is No. 18 with an average score of 9.910.
• The two gymnasts shared the floor title against Nebraska on Jan. 29 after both posting a 9.925.
• Guerin posted a season-high 9.950 on floor in Iowa’s road meet at No. 15 Michigan State on Jan. 22. It was the third time in four meets that Guerin has scored 9.900 or higher.
• Henderson has scored 9.900 or higher in all four competitions, including a season-best 9.925 in the season-opening win over Eastern Michigan on Jan. 8.

AAJH
Junior JerQuavia Henderson won the all-around in her season debut against Nebraska, posting a career-high score of 39.475. The Illinois native placed had two event titles and placed second on beam in the Hawkeye victory.
• Henderson is tied for 12th nationally in the all-around this season.
• In five meets, Henderson has tallied 14 top-three finishes to lead the team.

ROJAS EARNS B1G HONOR
Freshman Marissa Rojas earned Big Ten Freshman of the Week honors on Jan. 25 after winning her first career event title in the road win at Michigan State. The Michigan native posted an anchor score of 9.925 to take the title and she also made her floor debut, scoring a 9.800.

HENDERSON B1G SPECIALIST OF THE WEEK
For the first time in her career, junior JerQuavia Henderson was named Big Ten Specialist of the Week on Jan. 10 after scoring a 9.925 on vault and floor in the Hawkeyes’ win over Eastern Michigan.
• Henderson tied a career high 9.925 en route to her vault title. The junior has tied this score three times, placing ninth in program history.

IN THE RANKINGS
Iowa is one of four Big Ten teams in the top 20 of the Road to Nationals poll along with No. 1 Michigan, No. 5 Minnesota and No. 15 Michigan State. The Hawkeyes, who are ranked 16th, was previously ninth following Week 1, which was the second-highest ranking in program history.

UP NEXT
The Hawkeyes travel to Piscataway, New Jersey, to face Rutgers on Friday, Feb. 11. The meet is set to start at 6 p.m. (CT).