Bars
The Hawkeyes scored an overall 48.850 on bars with one gymnast setting a new season high. Junior Allyson Steffensmeier scored a 9.850 to tie for fourth place. Senior Alex Greenwald posted her second-highest score of the season, placing seventh with a 9.800. Sophomore Kareena Mcsweeny made her bar debut, scoring a season-high 9.750. Junior Ellinor Rogers and Henderson both scored a 9.725, and senior Clair Kaji posted a 8.950. 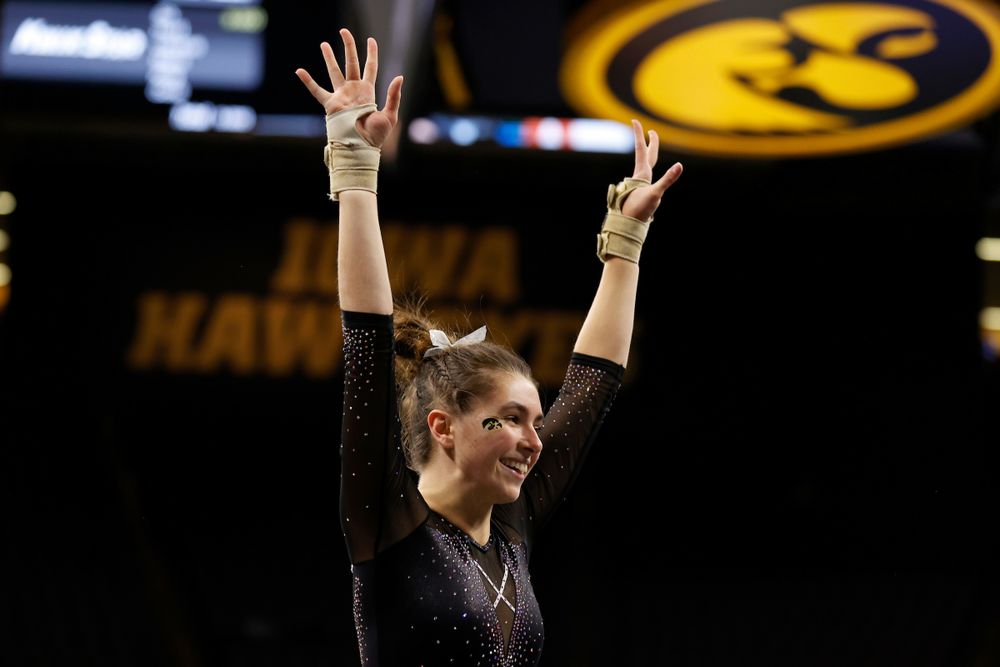 Beam
Three gymnasts tied or set new season-highs on beam after posting an overall 49.075. Killian and Henderson both tied their season and career highs to tie for third place after scoring a 9.875. Freshman Marissa Rojas scored a 9.825 to tie for eighth. Senior Mackenzie Vance set a new season-high, posting a 9.800. Sophomore Aubrey Nick scored a 9.700, and Kaji posted a 9.475.

Floor
The GymHawks, who are ranked sixth nationally on floor, placed in the top two with Henderson taking her fifth floor title. The Peoria, Illinois, native scored a 9.950, and her teammate Guerin followed to tie for second place after scoring a 9.900. Rojas set a new season and career high, scoring a 9.875 to tie for fourth place. Killian scored a 9.850, and Greenwald posted a 9.825. Kaji scored a 9.800 to help Iowa in their victory.

All Around
Henderson was the only gymnast to compete in the all-around and continued her undefeated record, taking her third title after scoring a 39.400.

UP NEXT
The Hawkeyes will travel to Toledo, Ohio, for the annual Big Five Meet. Iowa will compete against Illinois, Maryland, Michigan, and Ohio State on Feb. 18 at 6 p.m. (CT). The meet will be televised live on B1G Network.