THIS WEEK
The University of Iowa women’s tennis team returns to action on Monday, Feb. 15, against Missouri in a rescheduled match beginning at noon (CT) inside the Hawkeye Tennis & Recreation Complex. Attendance is free, or fans can follow along via live scoring/streaming at hawkeyesports.com. Iowa will then travel to Urbandale, Iowa, on Friday, Feb. 18, to face Iowa State in an Iowa Corn Cy-Hawk Series match at 5 p.m. (CT) inside the Mckee Indoor Tennis Complex. Fans can follow along through Iowa State’s live stats at bit.ly/3ouAeGa.

ON IOWA
Iowa enters next week’s competition with a 3-1 record. The Hawkeyes competed at ITA Kickoff Weekend on Jan. 28-29, where they recorded their first ITA Kickoff victory — 4-3 over North Florida — since a 4-2 win over Texas A&M-Corpus Christi on Feb. 1, 2010, in Waco, Texas. Iowa recorded doubles wins on courts two and three, along with singles wins on courts 4-6 to register the win over the Ospreys.

SCHMIDT’S SUCCESS
Freshman Marisa Schmidt bounced Mississippi State’s No. 50 Emmanouela Antonaki in straight sets (6-3, 6-4) at the No. 2 spot on Jan. 29. at the ITA Kickoff Weekend. The Germany native, who is 3-1 in singles competition, made her collegiate tennis debut going went 4-0 overall at the No. 1 and No. 2 spot in both singles and doubles in Iowa’s home opener against Drake and Marquette on Jan. 16.

2 HAWKEYES NATIONALLY RANKED
Sophomore Alexa Noel is ranked No. 5 and freshman Marisa Schmidt is No. 118 in the latest Intercollegiate Tennis Association’s national rankings released earlier this week. The rankings are a result of individual competition that took place last fall and the start of spring competition beginning last month. Noel has been ranked as high as No. 3, which is the highest in program history. The Summit, New Jersey, native won seven matches in the fall, including notching a win over both the No. 1 and No. 2 ranked players in the nation. Noel faced top-ranked Eryn Cayetano of USC and second-ranked Sarah Hamner of South Carolina twice each this fall, going 1-1 against both players. Noel bounced Cayetano in the semifinals of the ITA All-American Championships in South Carolina and Hamner in the quarterfinals of the ITA National Fall Championships in California.

IOWA NEWCOMERS
Freshman Barbora Pokorna, Marisa Schmidt, and Olivia Weiss are all making their spring debut for the Hawkeyes.
• Pokorna, who is from the Czech Republic, was a singles winner at U18 regional championship, a doubles semifinalist, at the U18 National championships, a two-time doubles finalist at the U14 national championship, and nationally ranked inside the top 10 each year for players born in 2001.
• Schmidt, the native from Germany, ascended as high as No. 63 this past year in the German National Women’s Open Rankings and has been ranked in the Top 20 Junior Rankings. Schmidt is the U21 champion and women’s open-runner in the Baden-Wuerttemberg Championships.
• Weiss, born and raised in Michigan, was a five-star recruit and was ranked No. 55 in the class of 2021 nationally by tennisrecruiting.net. She won four singles and 10 doubles tournaments on the USTA national level. She competed at No. 1 singles for two years at Royal Oak High School and was a two-time all-state honoree, two-time Scholar-Athlete of the Year,

MISSOURI BREAKDOWN
• Missouri is 0-1 on the season, losing to top-ranked Texas on Feb. 6.
• Iowa has an overall 9-3 record against the Tigers.
• Bronte Murgett advanced to the Round of 32 at the NCAA Tournament and received a main draw invitation to ITA All-Americans. The senior also won the ITA Central Regional Tournament.
• Eight letterwinners return from last year’s team, including All-American Bronte Murgett.
• The Tigers ended their 2021 season 15-16 overall.

IOWA STATE BREAKDOWN
• Iowa State is 2-0 this season, sweeping both Illinois State and North Dakota, 7-0.
• The Hawkeyes own a commanding 38-2 series record over the Cyclones.
• Sophomore Thasaporn Naklo is ranked No. 33 nationally in singles.
• The doubles team of Cabezas/Kadleckova is ranked No. 31.

IOWA TO HOST 2022 BIG TEN WOMEN’S TENNIS CHAMPIONSHIPS
The University of Iowa has been selected to host the 2022 Big Ten Women’s Tennis Championships. The event will take place April 27 through May 1 at the Hawkeye Tennis & Recreation Complex. The last time Iowa hosted the conference tournament was 2010. 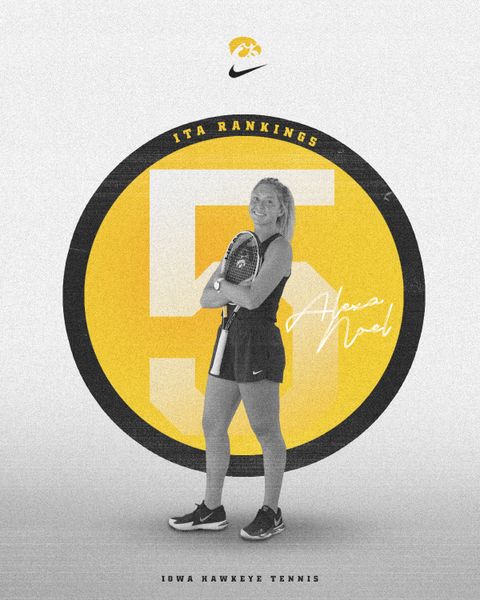