THIS WEEK
The 20th-ranked University of Iowa women’s gymnastics team will close out the regular season, traveling to Berkeley, California, to face No. 10 California on Sunday inside Haas Pavilion. The meet is set to start at 4 p.m. (CT) and will be broadcast live on the PAC-12 Network.

FOLLOW LIVE
• Sunday’s meet will be streamed on PAC-12 Insider, a free streaming service.
• Fans can follow along via live results at hawkeyesports.com or via Twitter (@IowaGymnastics).

WHAT YOU NEED TO KNOW
• The Hawkeyes are ranked 20th in the Road to Nationals rankings with a national qualifying score of 196.465. Iowa was ninth following Week 1 — the second-highest ranking in program history.
• Iowa tied a season high and tied for the fifth-best score in program history after scoring a 196.825 in its victory over No. 26 Iowa State on March 4. It was the third straight win over the Cyclones.
• The Hawkeyes posted the second-highest vault score in program history with a 49.500 with four gymnasts placing in the top two. Junior Linda Zivat took the vault title, setting a career-high 9.925 to tie for ninth place program history. Senior Bridget Killian posted a 9.900 to tie her season-high and tie for second place with teammates, senior Lauren Guerin, who set a new season-high and junior JerQuavia Henderson. The team sits 18th nationally on vault with an average score of 49.115.
• Three gymnasts placed in the top three on bar at No. 26 Iowa State with sophomore Adeline Kenlin scoring a 9.775 to place runner-up for the second straight meet. Freshman Marissa Rojas, who competed in her first bars event of the season, and junior Carina Tolan both tied for third place after scoring 9.750. Iowa ranks No. 40 on bars with an average score of 48.783.
• Three gymnasts placed in the top three on beam against No. 26 Iowa State. Senior Bridget Killian and sophomore Adeline Kenlin tied for first place after both scoring 9.900s and senior Clair Kaji placed third, scoring a 9.875. Iowa is ranked No. 21 on beam with an average score of 49.055.
• Senior Lauren Guerin and junior JerQuavia Henderson scored their second 9.975s of the season to share the floor-title against No. 26 Iowa State. Henderson is tied for sixth nationally with a national qualifying score of 9.945 and Guerin is tied for 10th nationally with a national qualifying score of 9.940. Iowa is ninth nationally on floor with an average score of 49.375.
• JerQuavia Henderson scored a 39.325 in all-around to place take the title at No. 26 Iowa State. The junior has three first-place finishes this season and is ranked No. 25 nationally.
• The Hawkeyes have earned three Big Ten weekly honors this season. Senior Lauren Guerin was the Specialist of the Week on March 8, junior JerQuavia Henderson was the Specialist of the Week on Jan. 10 and Marissa Rojas garnered Freshman of the Week honors on Jan. 25.
• Iowa returns 15 letter winners in 2022, including three All-Americans and four All-Big Ten selections. Iowa boasts a roster with seven seniors and 11 upperclassmen.

NOTABLES
• The Hawkeyes capped a 196.825 in their victory at No. 26 Iowa State, posting the fifth-best score in program history. Iowa took first place in four events, scoring the highest vault score since 2004 with 49.500.
• Four gymnasts scored above a 9.800 on beam against No. 26 Iowa State on March 4. Senior Bridget Killian scored a 9.900 for the second-straight week, tying for first place with sophomore Adeline Kenlin. Senior Clair Kaji scored a 9.875 to take third, and senior Mackenzie Vance scored a 9.800.
• Junior Linda Zivat made her return on vault after missing the previous three events, setting a new career-high after posting a 9.925 to take the vault title and tie for ninth place in program history. The Transfer from Michigan State has three first-place vault titles this season and has placed in the top-three five times.
• Sophomore Adeline Kenlin scored a 9.775 to take second place and recorded her fifth topthree finish in the event.
• Three gymnasts placed in the top three on floor, with senior Lauren Guerin and junior JerQuavia Henderson tied for first place after both scoring a 9.975. Senior Clair Kaji set a new season-high and tied for third after scoring a 9.925.
• The GymHawks scored 49 or higher in three events (beam, floor, and vault) in Ames.
• Iowa has had nine gymnasts win event titles this season — Alex Greenwald (1), JerQuavia Henderson (89, Clair Kaji (1), Adeline Kenlin (4), Allyson Steffensmeier (2), Lauren Guerin (5), Linda Zivat (3), Marissa Rojas (1), and Bridget Killian (2).

9.900 OHHHHH
The Hawkeyes posted nine scores of 9.900 or better at Iowa State on March 4. The total is not only a season high, but the most in a single meet in school history. The previous best was eight last season at Nebraska and in 2004 against Minnesota.

GUERIN RECEIVES BIG TEN SPECIALIST OF THE WEEK HONOR
Senior Lauren Guerin was named the Big Ten Specialist of the Week on March 8 after tying for the floor title and finishing runner-up on vault in the Hawkeyes’ Iowa Corn-Cy Hawk Series victory at No. 26 Iowa State. Guerin tied the school record on floor, finishing with a 9.975, while receiving one perfect 10 for the second time season this season. The gymnast posted a season-high 9.900 on vault to finish as runner-up. It was Guerin’s fourth career honor. 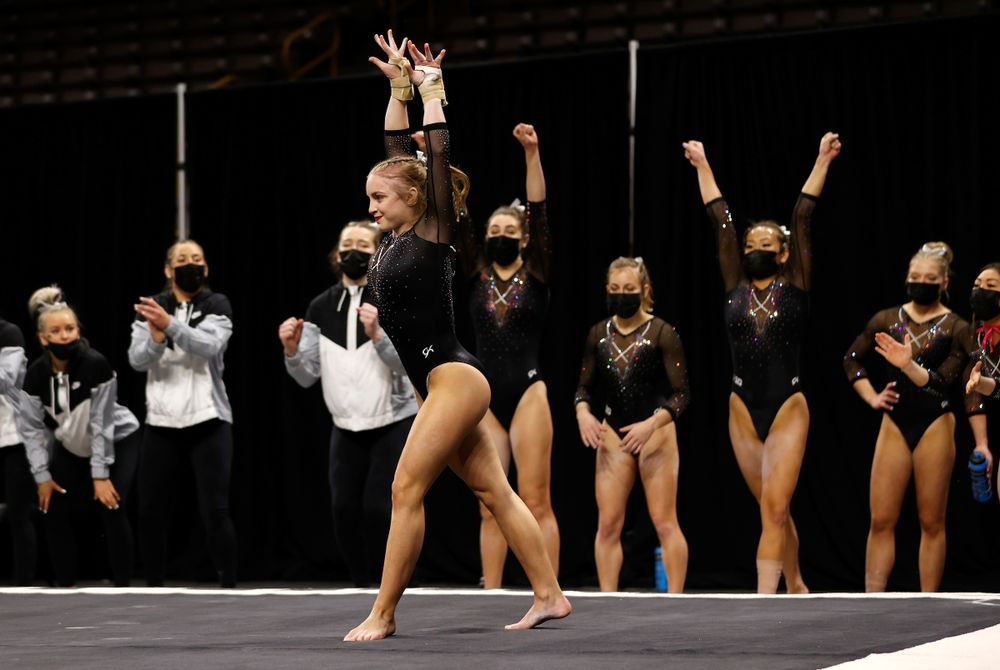 STANDOUT HENDERSON
Junior JerQuavia Henderson is ranked in three events in the Road to Nationals rankings, coming in tied for sixth on floor with a national average of 9.945. She ranked No. 2 on floor during Week 7 – the highest ranking of her career. The Peoria, Illinois, native has captured five floor event titles this season and has scored a 9.900 or higher in all 10 meets.
• Henderson has 12 event titles this season.
• In 12 meets, Henderson has tallied 27 top-three finishes to lead the team.
• She is tied at No. 19 on vault with an average score of 9.878. She was ranked as high as No. 5 on Week 1. Henderson has three vault titles and has nine top-three finishes. She has been in the top 30 in the vault rankings throughout the season.
• Henderson is tied at 25th nationally with an average score of 39.354 in all-around. She has placed in the top-three in the all-around in all six competitions. She had a career-high 39.475 in her all-around debut against Nebraska on Jan. 29.

COMEBACK OF THE SEASON
Iowa entered the final rotation against Penn State on Feb. 4, trailing by .600 points. The Hawkeyes rallied, scoring a program-record 49.650 on floor to improve to 3-0 in the Big Ten. Five gymnasts scored a 9.900 or higher with senior Lauren Guerin and junior JerQuavia Henderson posting a 9.975 to share the event title and tie for the highest score in program history.

FLOOR RECORDS GALORE
No. 17 Iowa broke the school floor record and had two gymnasts tie the top floor score in its 196.125-195.325 victory over No. 29 Penn State on Feb. 4.
• The previous floor record was 49.600, which was set against Minnesota/ Maryland in 2021.
• Senior Lauren Guerin posted a career-high 9.975 as the anchor to seal the comeback victory. The Texas native received one perfect 10.0 to tie for the highest score in program history.
• Junior JerQuavia Henderson posted a 9.975 for the second time in her career, tying her own school record. The Illinois native, who had a 10.0 from one judge, also posted a 9.975 last season against Maryland/Minnesota.

FLOOR QUEENS
Senior Lauren Guerin and junior JerQuavia Henderson have been consistently nconsistent on floor this season. The two gymnasts both rank in the top 10 in the Road to Nationals rankings with Henderson tied for sixth with a national qualifying score of 9.945 and Guerin tied at the No. 10 with a national qualifying score of 9.940. Both gymnasts have five first-place floor titles and have placed in the top-three nine times.
• The pair both received one perfect 10.0 en route to 9.975 scores on floor at Iowa State on March 4 and against Penn State on Feb. 4 to tie the school record and tie for the event title.
• Guerin has scored 9.900 or higher in nine of 10 meets this season, including a career-best 9.975 against Iowa State and Penn State. She has finished first or second on floor nine times this season.
• Henderson has scored 9.900 or higher in all 10 competitions, including her season-best 9.975 against the Cyclones and the Nittany Lions.
• As a team, Iowa has scored 49.225 or higher in all nine meets this season. Iowa has won or placed in the top three in every meet this season.

B1G HONORS
• Senior Lauren Guerin was named Big Ten Specialist of the Week on March 8 after tying for the floor title and finishing runner-up on vault in the Hawkeyes’ Iowa Corn Cy-Hawk Series victory at No. 26 Iowa State on March 4. The honor is the first of the season and her fourth career.
• Junior JerQuavia Henderson was named Big Ten Specialist of the Week on Jan. 10 after scoring a 9.925 on vault and floor in the Hawkeyes’ win over Eastern Michigan. It was her first career honor.
• Freshman Marissa Rojas earned Big Ten Freshman of the Week honors on Jan. 25 after winning her first career event title in the road win at Michigan State. The Michigan native posted an anchor score of 9.925 to take the title and she also made her floor debut, scoring a 9.800.

IN THE RANKINGS
Iowa is one of six Big Ten teams in the top 25 of the Road to Nationals rankings along with No. 3 Michigan, No. 8 Minnesota, No. 12 Michigan State, No.16 Ohio State, and No. 25 Illinois. The Hawkeyes, who are ranked 20th, was ninth following Week 1, which was the second-highest ranking in program history

KAJI X 6
Senior Clair Kaji returns for her sixth season with the Gymhawks after earning first-team All-Big Ten honors in 2021. It was Kaji’s third All-Big Ten recognition as she was the first Hawkeye since Houry Gebeshian to earn three All-Big
Ten honors. Kaji is the ninth Iowa gymnast to earn multiple first-team honors.

UP NEXT
The Hawkeyes head to Columbus, Ohio, on March 19 to compete in the 2022 Big Ten Championships.