THIS WEEK
Iowa opens the regular season Thursday at No. 13 UCLA and Sunday at Cal Poly. The Hawkeyes and Bruins kickoff at 9 p.m. (CT) at Wallis Annenberg Stadium in Los Angeles.

Iowa closes its tour of the Golden State at Kellogg Stadium in San Luis Obispo, California, with a 12:30 p.m. (CT) start.

WATCH/FOLLOW LIVE
• Thursday’s game will be streamed live by the Pac-12 Network, while Sunday’s contest will be available on ESPN+.
• Links to streaming and live stats can be found at hawkeyesports.com/soccergameday/.
• Fans can follow the Iowa soccer program on Twitter (@HawkeyeSoccer) for live in-game updates.

SCOUTING THE BRUINS
• UCLA enters the season ranked No. 13 in the United Soccer Coaches poll and No. 2 in the Pac-12 Conference preseason rankings. The Bruins return eight starters from a 2021 squad that captured the program’s second consecutive conference title and finished 16-1-3 on the season.
• 2020-All American goalkeeper Lauren Bryzkcy pitched nine shutouts with a 0.55 goals against average last season. Other Bruins to watch include Reilyn Turner, who posted 10 goals and 21 points at the forward position last season, and Mexican National Team member Maricarmen Reyes, who returns 10 points to the UCLA offense.
• Head coach Margueritte Aozasa makes her head coaching debut against the Hawkeyes after a stellar run as an assistant at Stanford. From 2015-21, Aozasa helped guide the Cardinal to two NCAA Championships in 2017 and 2019, along with four Pac-12 Conference titles from 2015-19.

SERIES HISTORY – UCLA
Iowa trails 0-1-0 in the series after falling to the Bruins in the Second Round of the 2020 NCAA Tournament. The
Hawkeyes led the Bruins, 1-0, until Reilyn Turner blasted the first of two goals in the final six minutes of
regulation to send UCLA to the Sweet 16.
• Thursday’s game is a future Big Ten Conference preview, as the Bruins announced in July they were joining the conference in 2024.

SERIES HISTORY – CAL POLY
Sunday will be the first meeting between Iowa and Cal Poly.

WHAT YOU NEED TO KNOW
• Head coach Dave DiIanni is in his ninth season at the helm of the soccer program. Last fall, DiIanni’s team posted a 12-6-2 record, tying for fourth in the Big Ten for Iowa’s highest regular season conference finish since 1999. The Hawkeyes return six starters and a host of other key contributors from the 2021 team. That includes a group of six fifth-year players from a class of seven seniors all with starting experience.
• The Hawkeyes qualified for the Big Ten Tournament in 2021, advancing to the semifinals as the tournament five seed before falling to Rutgers. Iowa has qualfied for three of the last four Big Ten Conference Tournaments, not counting the unorthodox 2020 event which saw all teams compete and which the Hawkeyes went on to win for the first time in school history.
• In 2019 and 2020, Iowa made back-to-back NCAA Tournament appearances for the first time in program history. The 2020 group earned Iowa’s first victory in the NCAA Tournament.
• Iowa returns 51.6% of its goal scoring production from last season. The Hawkeyes lose leading scorer Alyssa Walker, but return a majority of the eleven goal scorers from last season. Assist leader Hailey Ryberg is back this season after dishing seven assists across seven different wins in 2021.
• Three Hawkeyes — Hailey Rydberg, Kenzie Roling, and Samantha Cary — were named to the Big Ten Preseason Honors List. Iowa was picked to finish eighth out of 14 teams in the preseason coaches’ poll.
• Three players that earned Big Ten Conference postseason honors last season return in 2022. Sara Wheaton was named to the All-Big Ten second team, while Hailey Rydberg picked up third-team honors. Addie Bundy was a unanimous selection on the All-Freshman team.
• Rydberg and Sara Wheaton were also named to the 2021 United Soccer Coaches North Region third team a season ago.
• Seniors Sara Wheaton and Hailey Rydberg were voted team captains this season. 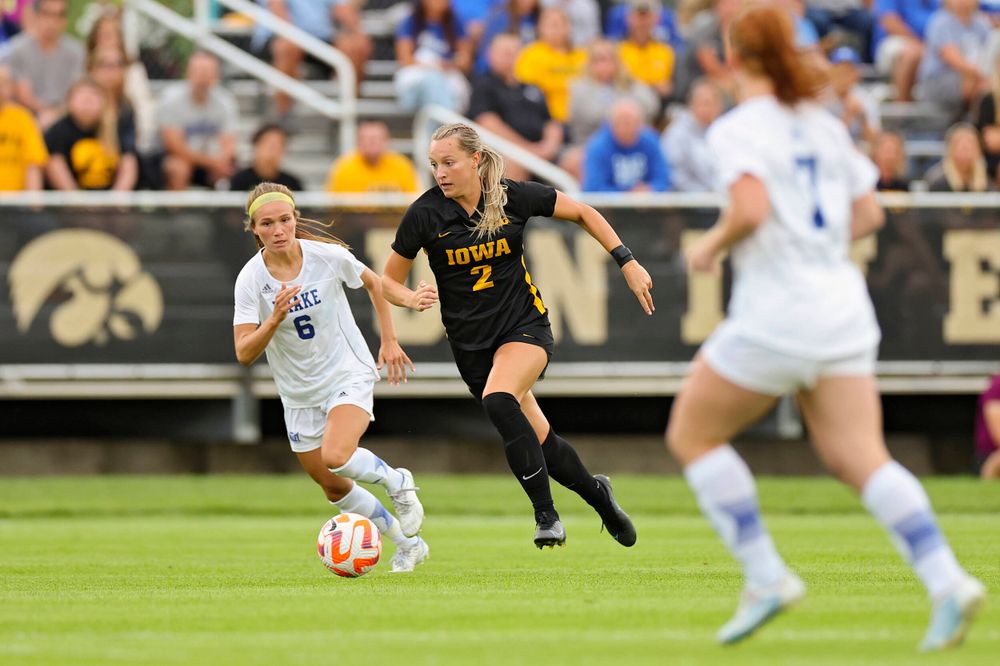 EXHIBITION ACTION
Iowa opened the season with a pair of home exhibitions against Northern Illinois and Drake. The Hawkeyes outscored the Huskies in a three-period scrimmage format on Aug. 7 and shutout the Bulldogs, 4-0, on Aug. 12. Newcomer Elle Otto posted a pair of goals against Drake as the Hawkeye offense posted a 22-4 advantage in shots and an 11-1 margin in shots on goals. Hailey Rydberg and Caroline Halonen also found the net on Friday.

DEPTH AT GOALKEEPER
Iowa features depth at goalkeeper with redshirt senior Monica Wilhelm and junior Macy Enneking holding down the net. The Iowa defense posted seven shutouts and held 18 opponents to two scores or fewer through 20 games last season with both players in goal throughout the year.
• Redshirt junior Monica Wilhelm notched 58 saves while allowing just 17 goals through 16 starts. Wilhelm tallied a career-best 11 saves against Rutgers on Oct. 10.
• Sophomore Macy Enneking saw action in five games down the stretch in 2021, including four starts. She tallied 27 saves and allowed three goals in that span.
• In 2020, Enneking was the only unanimous Big Ten All-Freshman Team selection and earned Big Ten Tournament Most Outstanding Defensive Player accolades for allowing just one goal in four games at the conference tournament. She tallied 52 saves across 11 games and averaged a conference-best .912 save percentage, allowing just five goals in 956 minutes played.

SHARING THE WEALTH
Eleven different Hawkeyes combined for 31 goals in 2021. Alyssa Walker (‘21) led the way offensively with nine goals and 20 points, finishing third in the Big Ten in goals scored.
• As for Iowa’s returning players, forward Kenzie Roling put up six goals for 12 points to finish second on the team in both statistical categories. Samantha Cary and Hailey Rydberg each sank a pair of goals, while defenders Sara Wheaton, Natalie Massa, and Maggie Jonston each scored one goal apiece.
• Rydberg tallied a team-best seven assists, while freshman Addie Bundy was close behind with six assists. Iowa outshot opponents, 290-243, and won the shots on goal battle,139-110, last season.

LOOKING AHEAD
Iowa’s home opener is scheduled for Thursday, Aug. 25, against Kansas. Kickoff at the Iowa Soccer Complex is set for 7 p.m. (CT) The Hawkeyes then host DePaul on Aug. 28 at 1 p.m. Both games will be streamed on BTN+.