NOTES - No. 5 Iowa Continues B1G Play on the Road

THIS WEEK
The fifth-ranked University of Iowa field hockey continues its road trip with two Big Ten road contests. The Hawkeyes face No. 21 Ohio State on Friday at 2 p.m. (CT) at Buckeye Varsity Field in Columbus, Ohio, before traveling to Ann Arbor to face No. 10 Michigan at 11 a.m. on Sunday at Ocker Field.

FOLLOW LIVE
• Friday’s game will be streamed live on BTN+, while Sunday’s game will be televised on BTN with Brendan Gulick and Kara Lentz on the call.
• Iowa field hockey fans can follow all contests via live stats on hawkeyesports.com. Game updates are also available on Twitter/@iowafieldhockey.

WHAT YOU NEED TO KNOW
• Iowa sits at No. 5 in the Week 6 Penn Monto/NFHCA Coaches’ poll on Oct. 11 after going 1-1 last weekend. The Hawkeyes lost an overtime battle against No. 5 Penn State, 2-1, before defeating No. 17 James Madison, 2-1.
• The Hawkeyes meet Ohio State in Columbus on Friday at the site of the 2022 Big Ten Tournament.
• Iowa won its 10th game of the season with its 2-1 come-from-behind win over No. 17 James Madison on Oct. 9. It is the sixth straight year and the seventh time in head coach Lisa Cellucci’s tenure that Iowa has reached the 10-win mark.
• The Hawkeyes are 5-3 against nationally ranked opponents in 2022, which includes a 2-0 victory over No. 1 Northwestern on Sept. 23 in Evanston. It was the second straight year Iowa has knocked off the No. 1 ranked team in the country.
• Iowa is in the midst of a stretch of seven straight games against nationally ranked foes.
• The Hawkeyes are 3-1 in true road games this season and the team has won 10 of their last 11 road contests dating back to last season.
• Iowa has had three players earn Big Ten weekly honors in 2022 — Anthe Nijziel (Defensive, Sept. 12), Grace McGuire (Defensive, Sept. 26) and Alex Wesneski (Offensive, Sept. 26).
• Iowa is outscoring its opponents, 37-12, this season.
• The Hawkeyes have posted five shutouts this season. Iowa didn’t allow a shot or penalty corner in a 2-0 win over No. 22 UMASS on Sept. 11.
• Iowa is fourth in the nation in goals against average (0.90), fifth in assists per game (2.92), sixth in shutouts per game (0.38), seventh in scoring margin (1.87) and winning percentage (.769), 11th in points per game (8.62) and 12th in save percentage (.782).
• Senior goalkeeper Grace McGuire is fifth in the nation in goals against average (0.93), ninth in win-loss percentage (.769) and 15th in save percentage (.774).
• Junior Alex Wesneski is tied for eighth nationally with 11 goals and she is 25th in points per game (1.69), while sophomore Leive Schalk is second in the Big Ten and 13th nationally in assists per game (0.69).
• The Hawkeyes return eight starters and 18 letterwinners from a team that finished 17-3, claimed an outright Big Ten title and advanced to the Elite Eight for the 19th time in program history in 2021.
• Head coach Lisa Cellucci is in her ninth season at the helm of the Hawkeye field hockey program and her 23rd season overall. Cellucci has been a part of 278 Iowa victories and in 2020, she led the program to the Final Four for the 12th time — the first since 2008. Iowa has posted double digit win totals in six of her eight seasons. The Hawkeyes have won three Big Ten titles (2019, 2019 (BTT), 2021) under her watch.
• Cellucci earned her third straight Big Ten Coach of the Year honor in 2021. She is the first coach in Big Ten history to be named Coach of the Year in three consecutive seasons.
• Iowa returns two-time Big Ten Player of the Year and Defensive Player of the Year Anthe Nijziel. The defender is the third player in Big Ten history to earn multiple Player of the Year honors.
• Iowa welcomes back three All-Americans (Nijziel, Grace McGuire and Esme Gibson), four NFHCA All-Region honorees (Nijziel, McGuire, Gibson, Lokke Stribos) and four All-Big Ten selections (Nijziel, McGuire, Stribos, Gibson).

IN THE NATIONAL RANKINGS
The Hawkeyes are ranked fifth in the Week 6 Penn Monto/NFHCA National Division I rankings. Iowa has been ranked in the top five in every poll this season. The team has been ranked in 68 consecutive polls dating back to the 2016 season.
• Last season, Iowa finished the year ranked third after being ranked No. 1 for six straight weeks heading into the postseason. The team made its debut at No. 1 on Sept. 28, marking the first time in program history the team had been atop the NFHCA poll.

CREATING OPPORTUNITIES
Iowa has scored 17 goals on 67 penalty corner attempts for a 25.4 conversion success rate.
• The team has had five or more penalty corners in seven of its 13 games.

WES-GOAL-SKI
Junior Alex Wesneski has scored in eight of Iowa’s first 13 games of the 2022 season as she leads the team with 11 goals, which are third in the Big Ten and tied for fifth nationally. Wesneski’s 11 strikes have come on just 27 shots.
• The Pennsylvania native has three multi-goal games this season. She scored two goals in back-to-back wins over Boston and Saint Louis on Sept. 2 and Sept. 4 before scoring both goals in Iowa’s 2-0 road win at No. 1 Northwestern, which led to her being named the Big Ten Offensive Player of the Week on Sept. 26.
• Wesneski has four multi-goal games in her career.
• Her offensive outburst has nearly tripled her career scoring output. She had four goals entering the 2022 season.

ANNI & GAME WINNERS
Sophomore Annika Herbine has scored in six of Iowa’s 13 games this season, giving her seven strikes — second-most on the team. Herbine has a team-best three game-winning goals (Wake Forest, Saint Louis and Providence), which are tied for third in the Big Ten.
• Herbine had her first career multi-goal game against Providence College on Sept. 9 — a 3-1 Hawkeye win.
• Herbine is also second on the team with seven assists, giving her 21 points, which are eighth in the Big Ten. 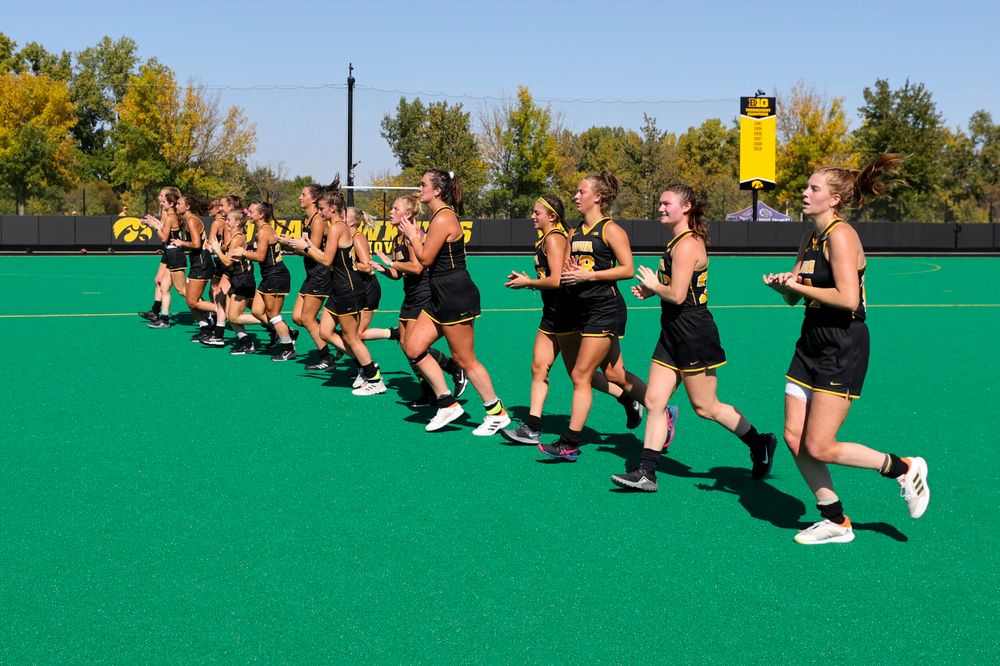 STOUT DEFENSE
The Hawkeyes’ defense was superb during its season-long seven-game winning streak, posting four shutouts in the seven contests. Iowa allowed just three goals on 35 shots in the seven games with 20 being on goal. (Sixteen of those shots came against No. 1 Northwestern with Iowa leading 2-0).
• Iowa’s defense has given up five or fewer shots in 17 of the team’s last 33 games dating back to the 2021 season.

MCGUIRE IN GOAL
Fifth-year senior Grace McGuire has started 51 consecutive games in goal. The Missouri native has won 40 games, posted 22 shutouts and made 127 saves during her career. She has a 0.84 career goals against average.
• McGuire is 10-3 with a 0.93 goals against average with 41 saves and four shutouts in 2022. She made a career-high 11 saves against No. 2 North Carolina on Aug. 28 and had eight saves (on 16 shots) against No. 1 Northwestern on Sept. 23.
• McGuire has two wins over No. 1 ranked opponents in her career.
• McGuire currently ranks fourth in the NCAA in goals against average, seventh in winning percentage (.) and (.769) and 12th in save percentage (.782).
• Last season McGuire made 46 saves in 20 games with an NCAA-best 11 shutouts. She had a program-record eight consecutive shutouts from Sept. 4-26.
• McGuire went 17-3 with a 0.75 goals against average and a 0.754 save percentage. She led the Big Ten and ranked second nationally in goals against average.
• The reigning All-American didn’t allow a goal in 561:03 minutes from the second quarter against No. 1 North Carolina on Aug. 29, 2021, to the fourth quarter of the Oct. 1 game at No. 6 Rutgers.

HELPING THE CAUSE
Iowa has 38 assists on its 37 goals in 13 games this season with 10 different players tallying at least one assist. Eight different Hawkeyes have at least two assists on the year. Iowa is fifth in the nation in assists, averaging 2.92 per game.

ROAD WARRIORS
The Hawkeyes finished the 2021 season with a 7-0 record away from Iowa City with victories at No. 5 Louisville, No. 6 Rutgers and No. 7 Maryland. The seven road wins were the most since 1999.
• Iowa has won 10 of its last 11 road games dating back to the 2021 season.

SCOUTING OHIO STATE
• The Buckeyes are currently 7-5 overall and 1-3 in Big Ten Conference action. Ohio State is currently riding a season-long four-game winning streak with wins over Michigan State, Kent State, Central Michigan and at Ohio.
• Ohio State lost five straight games from Sept. 11-25, falling to Miami, No. 3 Maryland, No. 17 Wake Forest, No. 19 Rutgers and No. 6 Penn State.
• The Buckeyes have scored 33 goals in 12 games with Sarah Charley leading the way with eight goals. Eight different players have two or more goals for Ohio State.
• Abby Danson has a 0.94 goals against average, 52 saves and a .825 saves percentage and four shutouts.

SCOUTING MICHIGAN
• The Wolverines are 7-4 overall and 2-2 in league action heading into the weekend. Michigan has won three straight games with wins at No. 19 Rutgers (4-1), vs. Ball State (7-0) and at Michigan State (3-1).
• Michigan’s four losses have come against No. 2 North Carolina, No. 5 Louisville, No. 6 Penn State and No. 3 Maryland.
• The Wolverines have scored 33 goals in 11 games with Abby Tamer leading the way with nine goals and Lora Clarke netting seven strikes.
• Three goalkeepers have seen action in the cage with Anna Spieker leading the way with a 1.02 goals against average with 15 saves.

SERIES RECORDS
• The Hawkeyes lead the all-time series over Ohio State, 53-14. Iowa has won eight straight in the series over the Buckeyes and 12 of the last 13. Ohio State’s last win came in 2015 by the score of 3-1.
• Iowa leads the all-time series over Michigan, 44-29. The two teams have split the last six meetings and the Hawkeyes are 4-3 over the last seven contests. Last season, Iowa won 2-1 in a shootout in a Iowa City before the Wolverines won in the Big Ten Tournament, 3-2.
• The Hawkeyes won the most recent meeting in Ann Arbor, winning 1-0 in 2019.

UP NEXT
Iowa will return to action Oct. 23, traveling to Evanston, Illinois for a neutral site matchup against Michigan at 11:30 a.m. (CT).