IOWA CITY, Iowa — The University of Iowa Athletics Department announced today the costs of season tickets for the 2023 football season have been reduced from 2022 prices.

Depending on seat location, prices for general public season tickets for the seven home games range from $335 to $425. Last season the season ticket cost was between $345-$450, based on location.

“We appreciate the investment our fans make each and every gameday to support our student athletes as they compete. While it seems like the cost of everything else is increasing, we wanted to not only hold our prices steady but reduce them slightly to recognize the support of the greatest fans in America.”

Gary Barta, Henry B. and Patricia B. Tippie Director of Athletics Chair

The Hawkeyes will host five Big Ten Conference games, beginning with Michigan State on Sept. 30. Purdue visits for Homecoming on Oct. 7, followed by the annual battle for Floyd of Rosedale Oct. 21 with Minnesota. The final two home games include Rutgers (Nov. 11) and Illinois (Nov. 18) for Senior Day. Start times and television information will be announced in August.

The Hawkeyes won five of their final six games to close the 2022 season, including a 21-0 win over Kentucky in the TransPerfect Music City Bowl. Along with the bowl game victory, Iowa won trophy games over Wisconsin and Minnesota. Iowa placed second in the West Division after winning the division in 2021.

Season ticket renewals forms are available online. The renewal deadline for public and faculty/staff season tickets is March 31. Season ticket holders earn ticketing priority over the general public for single game, special events, and postseason contests, in addition to saving more than $100 over the total cost of single game prices.

All renewal and new season ticket holders will be provided an opportunity to upgrade and/or select their seating locations based on availability and will receive selection dates and times in early April. This process is based on I-Club annual gift membership levels and priority points and will conclude in early May.

I-Club contributions, which fulfill regular and postseason seating and parking requirements, can be made at jointheiclub.com.

As part of the University of Iowa’s 10-year facilities master plan, construction is scheduled to begin this spring on a new parking ramp in Lot 43N, and a health sciences academic building in Lot 14. Due to these projects, UI Athletics has made the following parking changes, starting with the 2023 football season.

“A reduction in parking creates challenges, but our priority is to maximize as much parking as possible. We will continue to explore alternatives that enhance our gameday parking opportunities. The atmosphere in and around Kinnick Stadium is one of the best in the country. We are appreciative for the continued support of our fans and will continue to work hard in providing a wonderful gameday environment.”

Gary Barta, Henry B. and Patricia B. Tippie Director of Athletics Chair

Fans interested in purchasing new season tickets may do so by calling 1-800-IA-HAWKS and select option 2 or going online. Seat availability is based on open seats from the previous year. All new season tickets purchased prior to Friday, March 31 will be included in the annual season ticket holder upgrade event.

Additional ticket options, including single-game tickets, mini-plans, and group packages, will be available at a later date. Fans may call 1-800-IA-HAWKS or email tickets@hawkeyesports.com for additional ticket information. 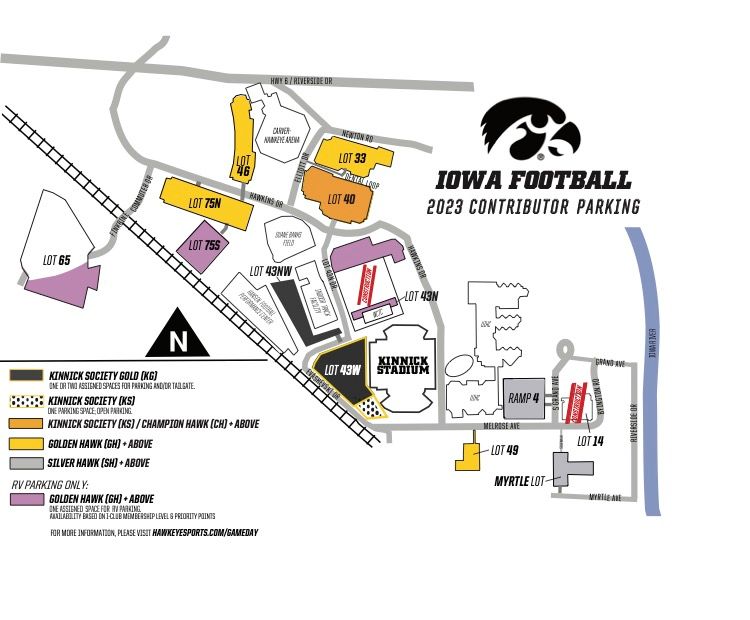