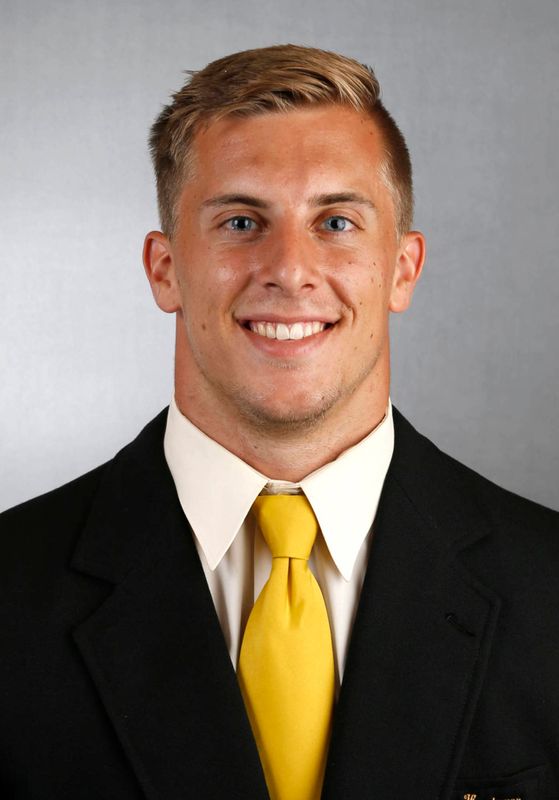 Hawk Item – – Recorded 89-yard touchdown on interception return vs. Illinois, which ties as sixth longest in school history . . . caused (2) or recovered (1) a fumble in three straight games in middle of the 2016 season . . . one of four juniors named to 2017 Leadership Group.

2017 Honors – – Academic All-Big Ten for third year . . . 2017 – – Not listed on the depth chart following spring practice, due to spring practice injury, and did not see action in first five games . . . started at free safety in 45-16 win over Illinois, in first action since spring injury . . . 89-yard interception return for a touchdown vs. Illinois for first career touchdown, which ties as sixth longest return in school history . . . also recorded two solo tackles, one assist and two pass break-ups . . . missed final six games of the regular season and 27-20 Pinstripe Bowl win over Boston College due to injury.

High school honors – – Named Class A Player of the Year by Iowa Newspaper Association . . . first team all-state by Iowa Newspaper Association and Des Moines Register as a senior . . . first team all-district and district offensive MVP as a senior . . . Most Valuable Player of Class A state championship game as a senior after leading team to state title and perfect 14-0 record. . . first team all-state by Des Moines Register and second team all-state by Iowa Newspaper Association as a junior . . . earned all-district honors on defense as a junior, while starting at quarterback, defensive back and placekicker . . . all-district special teams MVP as a sophomore . . . played defensive back and was kicker as a ninth grader as team won Class A state title . . . Career – – Starter at quarterback and defensive back, along with placekicking duties, as a senior . . . rushed for 878 yards and 13 touchdowns as a senior, while passing for 611 yards and 11 touchdowns, despite missing three games due to injury . . . was successful on 53-58 PAT attempts as kicker, along with making all three field goal attempts, with a long of 51 yards . . . rushed seven times for 181 yards and two touchdowns in title game, scoring on runs of 34 and 60 yards . . . also completed 4-5 passes for 110 yards and one touchdown, while making all seven PAT kicks . . . also lettered in basketball (4), golf (3), baseball (2), and track (2) . . . Iowa Newspaper Association Class 1A basketball Player of the Year as a senior . . . unanimous first team all-conference in basketball for three straight seasons . . . all-state in basketball as junior and senior . . . career totals include over 1,300 points and over 500 assists . . . led prep team to state title and first-ever state tournament appearance . . . captain of state tournament all-tournament team . . . first team all-conference and all-district shortstop in baseball as a sophomore . . . earned all-conference honors in golf as a sophomore and junior . . . placed sixth in state golf tournament as individual in leading team to third place finish at state . . . qualified for state track meet in four events as a senior, placing in three of the four events.