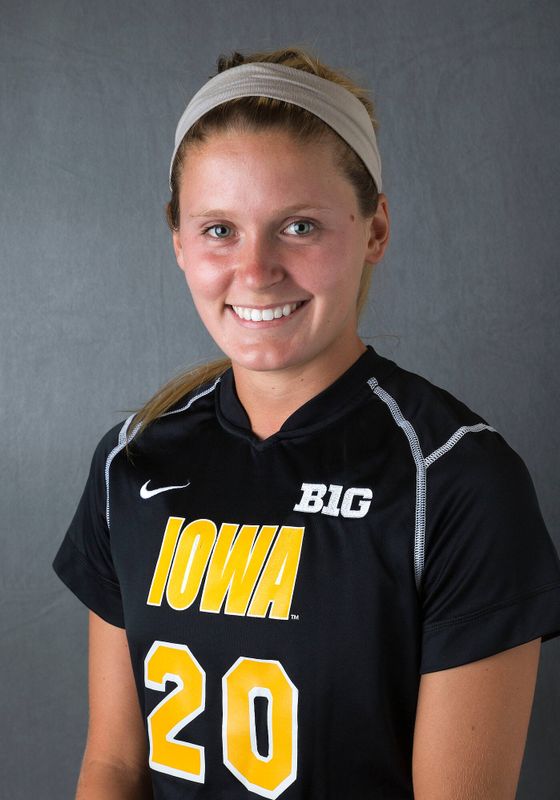 2014 as a Senior… First-team NSCAA/Continental Tire All-Great Lakes Region honoree… tabbed as a first-team All-Big Ten honoree as a forward by College Sports Madness…named to the Big Ten All-Tournament team… first-team All-Big Ten selection… named Iowa’s Offensive MVP for a fourth straight season… started all 22 matches, logging 1,942 minutes… led team in goals (12) and points (30), while ranking second on the squad with six assists… scored in eight contests, including four two-goal games… fired off a school-record 82 shots and scored three game-winning goals, including a strike in the 1-0 Big Ten Tournament semifinal victory over Northwestern… tallied her 100th career point in Iowa’s 2-0 victory over Illinois on Sept. 11, assisting on Nicole Urban’s strike… finished the season tied for third in the Big Ten in goals (12), ranked second in points (30), fourth in shots (82), and tied for 10th in assists (6)… led the Hawkeyes to 14 wins and their second-straight Big Ten title game appearance… during a time frame that covered games from Aug. 8 to Oct. 17, she was recognized in Top Drawer Soccer’s Midseason Big Ten player rankings as the fourth-best forward in the Big Ten and No. 6 overall… scored two goals and tallied a pair of assists in leading the Hawkeyes to victories over Indiana and Purdue, earning her Big Ten Offensive Player of the Week on Oct. 20 and was also recognized as the Big Ten Player of the Week by College Sports Madness on Oct. 21 while garnering honorable mention at the forward position on Top Drawer Soccer’s Team of the Week released on Oct. 22… letterwinner.

2013 as a Junior… Second-team All-Big Ten selection… second-team NSCAA All-Great Lakes Region selection… second team All-Big Ten selection by College Sports Madness… started all 23 matches, logging 2,015 minutes… led team in points (19) and assists (seven), while ranking second in goals (six) and shots (72)… tied for the team lead with three game-winning goals (vs. UC Davis, Penn State, Purdue)… named to the all-tournament team at the Pacific Soccer Classic… had a pair of assists in Iowa’s 3-2 victory over Saint Louis… scored the game-winning goal in Iowa’s 3-2 win over No. 16 Penn State — the first win in school history over the Nittany Lions… named Big Ten Co-Offensive Player of the Week on Nov. 4 following a two-goal performance in a 2-0 victory over Purdue… member of an Iowa team that posted a school-record 15 victories, advanced to its first Big Ten Tournament championship game and earned the program’s first NCAA Tournament appearance… letterwinner.

2012 as a Sophomore… Started 20 matches at forward with 1,594 minutes… co-winner of Iowa’s Most Valuable Player award… named team’s Offensive Player of the Year… one of three player’s in school history to be named team’s Offensive Player of the Year in back-to-back seasons… led team in points (33), goals (13), assists (7), shots (73), shots on goal (39) and game-winning goals (5)… had the second- most points and goals in a season in program history… had the fourth-most game-winning goals and fifth most assists in a season in program history… ranked second in the Big Ten in game-winning goals, fourth in points and total goals, sixth in shots and 10th in assists… named Forward of the Week by TopDrawerSoccer.com on Aug. 27… named to the Madness’ 2012 All-Big Ten First Team by CollegeSportsMadness.com… named to the All-Great Lakes Region second team by the NSCAA… scored in first nine matches of season… tallied multi-goal games against Eastern Illinois and Saint Louis… had a season-high five points with two goals and an assist against Eastern Illinois… took a season-high seven shots on five occasions… led offense that ranked third in the Big Ten in shots and goals, and fourth in points… recognized by TopDrawerSoccer.com in the 2012 Women’s Upperclassmen Top-100 list… part of team that earned second most wins in a season in program history… letterwinner.

2011 as a Freshman… Started every match (20) as a forward… led the team in scoring with 12 goals and six assists for 30 points… named the Big Ten Freshman of the Week in back-to-back weeks (Sept. 5, 12)… earned the team’s Most Valuable Offensive Player award… etched her name into the season points and goals leaders list (second in both categories)… among the program’s leaders for assists in a season, ranking No. 6… named to the Big Ten’s All-Freshman team along with teammate Caitlin Brown… recognized by TopDrawerSoccer.com in the 2011 Women’s Freshman Top-100 list… part of a team that set or equaled nine school records… letterwinner.

High School… Named the MacDonald Cartier soccer MVP three years in a row… named the school’s volleyball MVP and female athlete of the year, as well as the city of Sudbury’s female athlete of the year… was the team’s top scorer during her freshman campaign… was an Ontario Federation of School Athletic Associations “A” Gold Medalist in 2009-10… named the school’s MVP in three different sports (soccer, volleyball and cross country) during her high school career… was the top scorer for three different club teams… also a nationally ranked Taekwondo black belt.