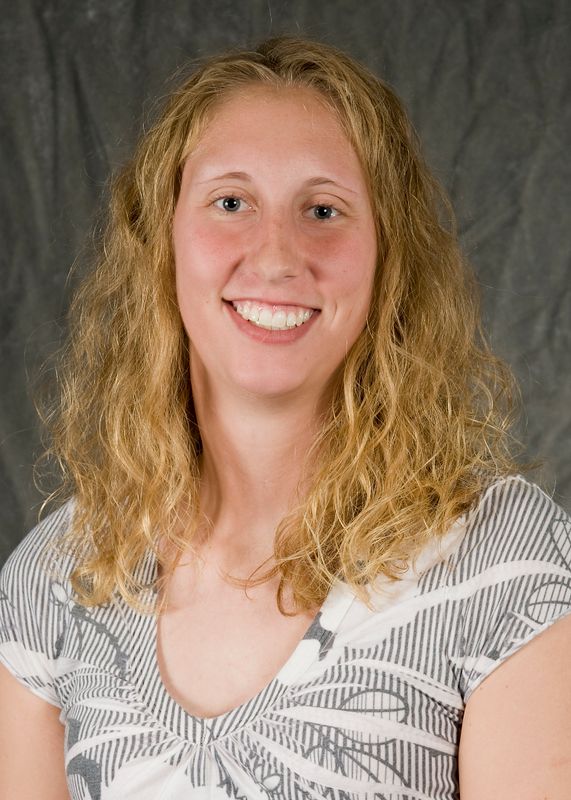 Hawk Items…Transferred to Iowa during the summer of 2006 after playing freshman year at Kansas State… wore the number 40 with the Wildcats… played for one season under assistant coach and former Iowa standout Jennie Lillis.

2009-10 as a Senior…Missed the entire season after having life-threatening blood clot removed in her right leg one day before Iowa’s first exhibition game of the season.

2008-09 as a Junior…Saw action in 27 games… suffered an ankle injury during practice on Jan. 22 and missed five games due to an injured ankle… played the last seven games as a reserve after starting the first 18 games of the year… returned to action Feb. 12, playing 18 minutes off the bench vs. #13 Ohio State… posted four double-doubles (Boston, Iowa State Wisconsin, Minnesota)… grabbed five rebounds or more 16 times… shared or led the team in rebounding seven times.

2006-07…Unable to compete in games due to NCAA transfer rules, but practiced with Iowa.

2005-06 as a Freshman as Kansas State…Played in 33 games of the season with 31 starts at center… the 31 starts were the fifth-most in the nation among freshmen… scored double figures 15 times… also reached the 20-point plateau four times… one of two players to hit over 50 percent of their shots from the floor (52.5)… ranked seventh in the Big 12 Conference in field goal percentage, which was ninth-best in the nation among freshmen… named to the Fall 2005 Big 12 Commissioner’s Honor Roll… averaged 10 points., 4.6 rebounds, had a total of 22 blocks and 26 steals in 33 games… in her collegiate debut, scored a game-high 24 points including the first 12 of the game in the team’s season-opening win over Detroit… made her first career start vs. Detroit, converting her first four field goal attempts of the game and added three free throws in the first six and a half minutes of play.

High School…Four-year letterwinner and starter in basketball under coach Dave Bertholf at Winfield High School… holds the school records for career points (1,609), rebounds (785), blocks (210) and steals (157)… also holds the school’s single-game records for points (36), free throws made (10), offensive rebounds (8), defensive rebounds (16), rebounds (21), blocks (9) and steals (6)… KBCA all-state first team selection as a senior… two-time all-state first team Class 5A… second team selection as a sophomore and honorable mention as a freshman… led the Vikings to their first 5A sub-state basketball championship in 13 years in 2003… three-time first team all-league selection… three-time Blue Collar Player of the Year… second team all-league pick as a freshman… also lettered in volleyball, golf and track and field… holds the school record in the shot put, discus and javelin… placed first in the shot put at the state 5A championships as a junior… finished fourth at state in the discus as a sophomore and third in the shot put as a freshman… golf team won league championship in 2003… member of the Kansas Belles basketball team that won the girls’ under-19 AAU national championship in Orlando the summer of 2005… garnered MVP as well as all-tournament team honors at the event… Honor Roll student.