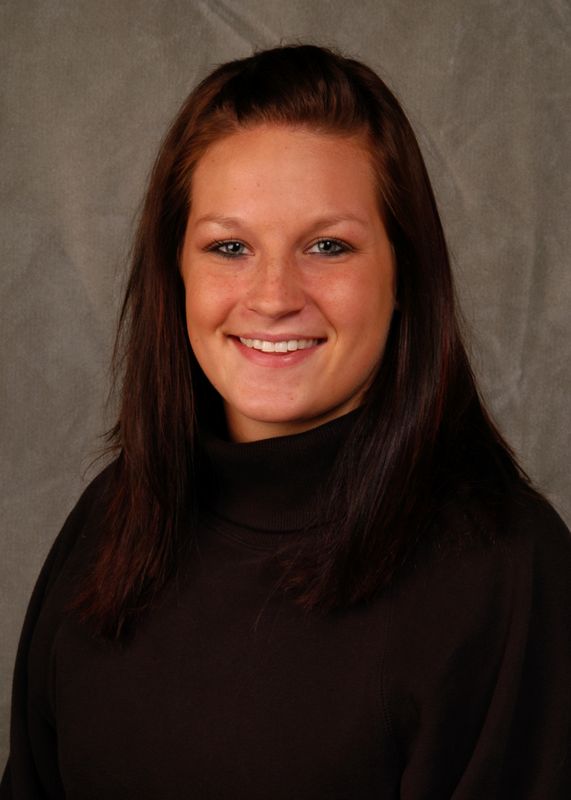 2008-09 as a Senior…
Competed in 18-of-32 games off the bench as a reserve… selected to represent the team on ISAAC… had one rebound and one assist in season opening win vs. Texas State… tallied two assists and one rebound in road loss at Kansas… posted two points and three rebounds in victory over Kansas… made her first 3-pointer of the season in win over Providence… had one field goal attempt in 10 minutes of action in victory over Texas Tech at the Paradise Jam… recorded a steal and an assist in overtime loss to South Florida at the Paradise Jam… chased down one rebound and had six shot attempts in loss to #3 California at the Paradise Jam… tallied three points, one rebound and one assist in road loss at #12 Duke… registered one assist and one defensive rebound in win over UNI… pulled down two rebounds and missed two 3-point field goal attempts in five minutes of action in road victory at Drake… drained her only 3-point attempt in home win over Minnesota… recorded three points and a steal in home triumph over Northwestern… collected a steal in Big Ten Tournament quarterfinals win over fifth-seeded Minnesota.

2007-08 as a Junior…
Saw limited action in eight games this season… scored 23 points and collected five rebounds, five assists, one block and one steal… seven of her eight field goals came from behind the arc, ranking fourth on the team in triples made and attempted… shot at a 57 percent (8-14) clip from the field and 58 percent (7-12) from 3-point range… missed a month and a half of practice and competition after being diagnosed with a stress fracture in her left foot (Dec. 19)… blocked her first career shot in season opening victory over Dartmouth… tallied three points and three rebounds in victory over Detroit… posted a game and career-high 14 points, bolstered by a perfect 4-4 shooting from behind the arc, in win over Northern Illinois… returned from injury netting six points on 2-3 shooting from behind the arc and also collecting an assist in home win over Michigan State… had two assists in home triumph over Northwestern… dished one assist in three minutes of action in Big Ten quarterfinals win over Michigan.

2005-06 as a Freshman…
Played 14 games, including nine of the last ten… missed pre-season practice first five games due to a foot injury… grabbed one rebound in three minutes of action in win over Vermont… scored six points on 2-3 shooting from 3-point range in four minutes of action in win over Drake… tallied three points in 1-3 shooting from behind the arc at Indiana… grabbed one rebound in one minute of action in win at Michigan… posted career highs in points (11), field goals made (3) and attempted (4), free throws made (2) and attempted (2), rebounds (3) and minutes played (12) in road win at Northwestern… collected three points and one steal at Penn State… dished out one assist in victory over #8 Purdue… tallied three points, one assist and one steal in home win over Northwestern.. netted two points on her only field goal attempt and dished out an assist in two-point loss at #14 Michigan State… recorded two points, one assist and one steal in 12 minutes of action in home win over Michigan… collected an assist in victories against Illinois and Indiana.