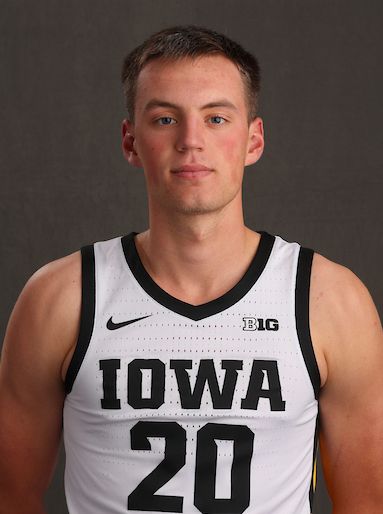 2021-22 Honors — Co-winner of the team’s Newcomer of the Year Award… Spring Semester Dean’s List honoree. 2021-22 — Competed in 34-of-36 games… his 34 3-pointers made were fourth most on the team and are the eighth most ever by a Hawkeye freshman… missed only one free throw attempt (15-of-16, .938)… tallied double figures in scoring seven times… averaged five points per game… poured in a season-high 21 points, bolstered by sinking five 3-pointers, in victory over Alabama State… made 6-of-10 (.600) from long distance in Iowa’s four games at the Big Ten Tournament, including sinking both attempts in the championship game versus #9 Purdue… sank a combined ten 3-pointers in back-to-back games (Alabama State; Western Michigan)… pulled down a season-best eight rebounds in win at Nebraska… letterwinner.