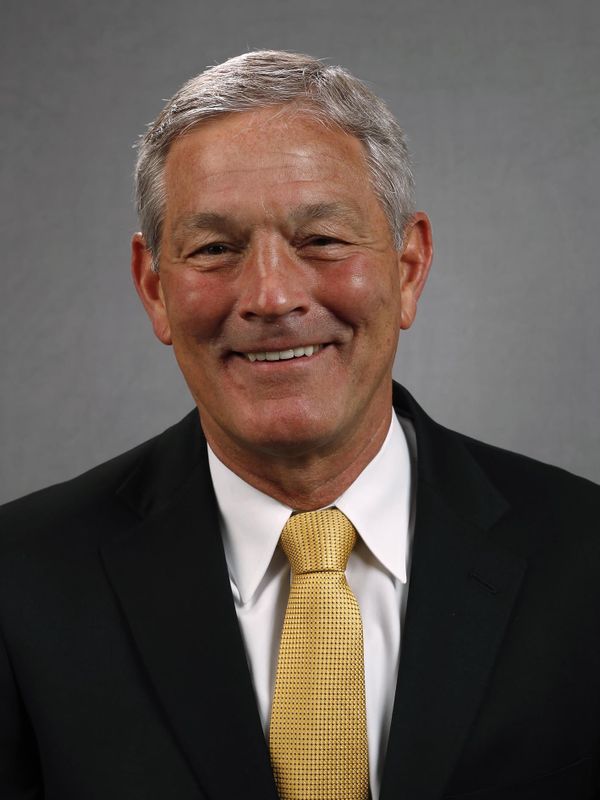 Moon Family Head Football Coach Kirk Ferentz has completed 24 years as the head football coach at the University of Iowa. The position of UI head football coach was endowed in 2021 by Will and Renee Moon. The Bettendorf, Iowa couple are UI alumni and longtime Hawkeye supporters.

Ferentz and the Hawkeyes closed the 2022 season with a 21-0 win over Kentucky in the TransPerfect Music City Bowl as Ferentz claimed the 10th bowl win of his career. That mark ties former Penn State coach Joe Paterno for the most bowl wins in league history. Nationally, Ferentz is one of 19 coaches with 10 bowl victories.

With Iowa’s win at Minnesota in late November, Ferentz tied Amos Alonzo Stagg for third place in Big Ten Conference victories with 115, and his career mark in Big Ten games is 115-83. Overall, Ferentz has a 186-115 record with the Hawkeyes, ranking fourth all-time in wins among Big Ten coaches. As a head coach Ferentz holds a 198-136 record in 27 seasons.

In addition to serving as Iowa’s head coach for 24 seasons, Ferentz has been a member of the Iowa coaching staff for 33 seasons. His most recent contract extension extended his agreement with Iowa through the 2029 season.

Under Ferentz’ leadership the Iowa football program has earned 20 bowl game invitations since 2001 (2020 Music City Bowl was canceled). That success has been achieved with strong commitments to the program, the University of Iowa, and the ideals that represent Hawkeye football – hard work, determination, player development and character, on and off the field.

Iowa’s win in the Music City Bowl improved Iowa’s final 2022 record to 8-5, giving the Hawkeyes their eighth win for the seventh consecutive season (Iowa was 6-2 in the 2020 Covid-19 season). Only four other programs (Alabama, Clemson, Georgia, Ohio State) have won eight games every year over that time frame.

The Hawkeyes played the toughest schedule in the West Division in 2022, as two of their five losses came to playoff teams Michigan and Ohio State. Two additional losses were by three-point margins as Iowa improved throughout the season, winning five of its final six games.

In 2021 Ferentz led Iowa to its second Big Ten West Division title (2015), posting a 7-2 conference record and 10-4 overall mark. The Hawkeyes won 10 games for the seventh time under Ferentz and earned an invitation to the Vrbo Citrus Bowl, Iowa’s 12th January bowl game and 19th post-season invitation overall in the Ferentz era. Iowa was ranked 23rd in the final 2021 rankings, the fourth straight season the Hawkeyes have ended the year in the Top 25.

With Iowa’s 33-7 win over Northern Illinois in the opening game of the 2018 season, Ferentz recorded win No. 144 as Iowa’s head coach, surpassing the late Hayden Fry as the winningest football coach in program history. Fry was Iowa’s head coach for 20 seasons (1979-98).

Ferentz is the longest tenured head football coach in the nation. Ferentz and Fry are the only head coaches to lead a Division I football program for 20 years, consecutively. With a 63-0 win at Illinois in 2018, Ferentz became just the fifth coach in Big Ten Conference history to win 150 games as a Big Ten head coach. Ferentz earned his 100th career Big Ten win at Penn State (Nov. 21, 2020).

Iowa’s appearance in the 2022 Vrbo Citrus Bowl marked the 12th January bowl game for the Hawkeyes under Ferentz, who has posted five January wins as Iowa’s head coach. The Hawkeyes have twice won three straight bowl games (2008-10 and 2017-19) under Ferentz.

Iowa opened the 2021 season with six straight wins, including three victories over ranked opponents while being ranked as high as second in the nation. Following consecutive losses, the Hawkeyes rallied to win their final four regular season games to earn the Big Ten’s West Division title. The Iowa defense set a school record with 25 interceptions and Iowa’s 78 interceptions over the past four seasons ranks first nationally.

The Hawkeyes won 47 games from 2015-19, the best five-year win total in school history. Just eight programs in the nation won more games during that time frame. Ferentz guided the Hawkeyes to eight wins or more in five consecutive seasons (2015-19) and 13 seasons overall since 2003.

On the field, Ferentz’s approach can be described as smart, tough, and physical. Off the field, academics and character development are a focus. In 2021, the University of Iowa outperformed its peers nationally in the classroom for the 10th consecutive year, according to data released by the NCAA.

Following back-to-back narrow losses to open the 2020 season, Iowa won six straight games, all in Big Ten play, to complete the regular season. The Hawkeyes scored at least 26 points in each of the six wins, while holding three opponents to just seven points. The winning streak included road wins at Minnesota, Penn State and Illinois, and trophy game victories over Minnesota, Nebraska, and Wisconsin. The Hawkeyes were ranked 15th in the nation in the final CFP rankings and coaches poll, 16th by the Associated Press. Iowa’s Music City Bowl date with Missouri in December was canceled due to the pandemic.

Iowa concluded the 2019 season with three straight wins over border rivals Minnesota, Illinois, and Nebraska, followed by the 49-24 Holiday Bowl win over No. 22 Southern California. Following a 24-22 loss at Wisconsin to open November, the Hawkeyes handed seventh-ranked Minnesota its first loss of the season to maintain possession of Floyd of Rosedale. Iowa’s three losses came by a combined 14 points to three teams who were ranked in the top 20 at the time. Iowa also maintained possession of the Iowa Corn Cy-Hawk Trophy with a non-conference win at Iowa State in September.

Iowa won six of its first seven games in 2018 and closed the season with wins in the final three games, including the 27-22 Outback Bowl win over No. 18 Mississippi State. The four losses came by a total of 23 points, and all were decided in the final minutes of play. Iowa’s defense ranked second nationally in interceptions after leading the nation in 2017.

Iowa’s 8-5 record in 2017 included wins in three of four trophy games, with victories over Iowa State, Minnesota, and Nebraska, plus the Pinstripe Bowl win to conclude the season. Iowa also began November with a 55-24 win over third-ranked Ohio State. Nine of Iowa’s 12 regular season opponents were bowl eligible (posting an 8-1 record) as the Hawkeyes faced one of the strongest schedules in the nation.

Iowa closed the 2016 regular season with three straight wins, including two over ranked opponents. Iowa posted a 6-3 record in Big Ten play to tie for second place in the West Division and finished the season at 8-5 overall.

Highlights of the year included Iowa defeating second-ranked Michigan and 15th-ranked Nebraska in the final month of the season, as well as earning a January bowl invitation for the 10th time during the Ferentz era.

The Iowa football program enjoyed a historic season in 2015, posting a final 12-2 record. Ferentz led the 2015 Hawkeyes to a perfect regular season, setting a school record with 12 wins. The Hawkeyes won the Big Ten Conference West Division (8-0) before falling to Michigan State, 16-13, in a close championship game that was decided in the final minute of play. The Hawkeyes earned their sixth invitation to the Rose Bowl, which was Iowa’s first appearance in Pasadena in 25 years.

Ferentz was recognized with both the Hayes-Schembechler and Dave McClain Big Ten Conference Coach of the Year awards in 2015. He was named Eddie Robinson (FWAA) and Woody Hayes national Coach of the Year (Columbus Touchdown Club), and received the Dodd Trophy, presented by the Bobby Dodd Coach of the Year Foundation. He was also named the American Football Coaches Association (AFCA) Region 3 Coach of the Year.

Coaching History
Ferentz’ coaching career began as a student assistant (1977) at his alma mater, the University of Connecticut. The next two years (1978-79) were spent at Worcester Academy, where he also taught English literature. He then served as a graduate assistant offensive line coach at the University of Pittsburgh during the 1980 season. That Pittsburgh team (coached by Jackie Sherrill) finished with an 11-1 record and a number two national ranking.

Ferentz joined Hayden Fry’s Iowa staff as the offensive line coach in 1981, which became Iowa’s first winning seasons in 19 years. The season was highlighted by the Hawkeyes winning a conference title and earning a Rose Bowl berth – both of which had not occurred in 20 years.

Ferentz was named head coach of the University of Maine Black Bears in 1990 and held that position for three years before being hired by Bill Belichick and the Cleveland Browns to coach the offensive line. He remained with the organization after it moved to Baltimore and became the Baltimore Ravens, serving as assistant head coach and offensive line coach. In all, he worked six years with the Cleveland Browns/Baltimore Ravens of the National Football League.

He rejoined the Hawkeyes as head coach in 1999 and is Iowa’s longest tenured head football coach.

Personal History
Off the field, family is the top priority for Ferentz. Ferentz and his wife, Mary, have been married for 43 years. They have five children: Brian, Kelly, Joanne, James, and Steven. They also have four granddaughters (Presley, Blakely, Connolly, and Jolie), and six grandsons (John, Forest, Nixon, Lincoln, Beckett, and Marshall). All five of their children graduated from City High School in Iowa City and earned degrees from the University of Iowa; and each of the boys had the incredible experience of playing football at the University of Iowa with their father as head coach.

Kirk and Mary are very enthusiastic supporters of the University of Iowa Stead Family Children’s Hospital. They serve as advocates for the Children’s Hospital, hosting and speaking at events across the state to raise awareness and support for the hospital. Kirk and Mary established the “Ferentz Family Pediatric Research and Education Endowment Fund” in 2007. In honor of their granddaughter, Mary and Kirk donated more than $1 million in 2017 to establish the Savvy Elizabeth Ferentz Neonatology Research Fund. In addition, the Iowa Ladies’ Football Academy has donated $3 million to the UI Stead Family Children’s Hospital, which opened across the street from Kinnick Stadium in December, 2016.

Ferentz has also been involved in supporting a number of community and university-related initiatives, including serving as the honorary chair of the University of Iowa’s United Way campaign. Kirk and Mary have also contributed generously to the University of Iowa, including donations to the University’s College of Liberal Arts. Another significant gift was a $500,000 commitment to support the Iowa Football Legacy Campaign, which included two key projects benefitting the Hawkeye football program; the indoor practice facility; and the Stew and LeNore Hansen Football Performance Center.

Ferentz was born August 1, 1955, in Royal Oak, Michigan. He attended Upper St. Clair High School in Pittsburgh, Pennsylvania, and graduated from the University of Connecticut in 1978 with a bachelor’s degree in English Education. He was a football captain and an academic all-Yankee Conference linebacker at Connecticut.

Ferentz received the Distinguished Alumnus Award from the Neag School of Education at the University of Connecticut in May, 2009. He was inducted into the Upper St. Clair High School Hall of Fame in September, 2002, and the Western Chapter of the Pennsylvania Sports Hall of Fame in May, 2003.

•    Tied for third all-time in Big Ten conference wins (115), and ranks fourth in overall wins (186)
•    Ranks first all-time at Iowa in coaching victories with 186
•    One of just seven Big Ten coaches ever to guide a team to 10 wins or more in three straight seasons