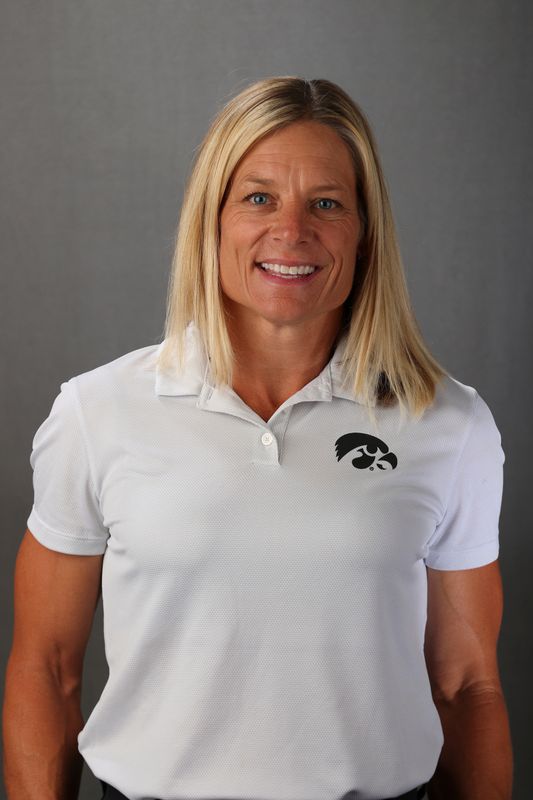 Megan Menzel enters her 12th year as the head coach of the University of Iowa women’s golf program in 2022-23. Menzel joined the Hawkeyes in August 2011 after serving as a teaching professional at the Denver Country Club from 2009-11.

During the 2021-22 season, the Hawkeyes posted two of the top 10 rounds in program history.  Iowa shot a four-under par 284 at the Chattanooga Classic for the second-lowest round in program history.  The team also shot a 287 at the Ron Moore Intercollegiate en route to an 880 54-hole total, which ranked seventh all-time.

Freshman Paula Miranda enjoyed a strong first season, posting a 74.74 scoring average during the season.  The Mexico native led the team in six tournaments, including finishing as runner-up at the Ron Moore Intercollegiate with a four-under par 212 (72-72-68), which was the second-lowest 54-hole score in program history.  Miranda was named Big Ten Player of the Week for her efforts in Colorado.

In 2020-21, Menzel led the Hawkeyes to a team title at the UNI Invitational and to three top four finishes, including runner-up showings at the BYU Spring Classic and Chattanooga Classic. Iowa, who finished 10th at the Big Ten Championships, posted three of the top 10 rounds in school history (including the second and third-best scores) and Lea Zeitler shot a school-record round of 66 at the Rebel Beach Invitational.  Freshman Klara Wildhaber led the team with a 73.9 scoring average — the sixth-best single-season average in school history.

During the 2019-20 season, Menzel finished her ninth season as Iowa head coach. She led freshman Lea Zeitler to two Big Ten Golfer of the Week honors — the first Hawkeye to earn a Big Ten weekly honor since Shawn Rennegarbe in 2018. Before the 2020 Spring season was canceled due the COVID-19 pandemic, Menzel guided three Hawkeyes to top-20 finishes, including Zeitler’s four, freshman Jacquelyn Galloway’s two, and one from freshman Morgan Goldstein.

During her eighth season (2018-19), Menzel coached Iowa to a team title at the Diane Thomason Invitational, their first title since the 2015-16 season when they won the Diane Thomason Invitational. She helped six different Hawkeyes earn top-20 finishes. Freshman Manuela Lizarazu led the team with three, while seniors Shawn Rennegarbe and Kristin Glesne, freshman Dana Lerner, and sophomore Brett Permann and Stephanie Herzog each registered one.

In her seventh season at the helm (2017-18), Menzel guided four different Hawkeyes to nine top-30 finishes. Senior Jessica Ip led the team with four, while junior Kristin Glense and freshman Rachel Fujitani added two, and junior Shawn Rennegarbe registered one. The Hawkeyes faced one of the toughest schedules in the nation. In 10 tournaments, Iowa faced 22 top-25 opponents.

In her sixth season (2016-17), the Hawkeyes recorded a team scoring average of 76.0 to mark the second-lowest team average in school history. At the Westbrook Spring Invitational, the team posted top-5 marks for 18-holes, 36-holes, and 54-holes with scores of 287, 586, and 873. Junior Jessica Ip registered the second-lowest 18-hole score in school history with two rounds of 68, and recorded the sixth-lowest stroke average during the spring season with a 74.2 average. Freshman Sophie Liu recorded the eighth-lowest stroke average with a 74.8 during the fall slate.

During her fifth season at Iowa (2015-16), the women’s golf team had one of their best seasons in Hawkeye history. At the Johnie Imes Invitational, the team set records for best team performance for 18-holes, 36-holes and 54-holes with scores of 282, 571 and 864.  During the spring slate, the Hawkeyes registered the lowest scoring average in team history (73.9).

Menzel led senior Amy Ihm to one of the best seasons in Hawkeye history. At the Big Ten Championships, Ihm the record for best individual performance for 54-holes with a score of 211. Ihm was named a second team All-Big Ten selection, the recipient of Iowa’s Big Ten Sportsmanship Award, and a two-time Big Ten Player of the Week. The Peosta, Iowa, native set records for individual 54-hole performance (-5; 211), individual 36-hole performance (-6; 138), and individual 18-hole performance (-4; 68). In her senior campaign, Amy registered a 73.1 stroke average — the lowest season average in program history by 3.2 strokes.

Menzel’s third year in Iowa City (2013-14) was highlighted by a record-breaking performance in the spring opener, as Iowa fired an 877 (+13) to establish a new 54-hole school record at the Westbrook Invitational on Feb. 23-24. The Hawkeyes’ 36-hole score of 585 was good for third overall in Iowa history, and their 18-hole score of 291 tied for fifth. Off the course, Briana Midkiff and Nicole Rae garnered Academic All-Big Ten honors.

During her second campaign (2012-13), the Hawkeyes registered six individual top-10 finishes, highlighted by Lauren English’s eighth place finish at the Challenge at Onion Creek, which earned her Big Ten Golfer of the Week honors. Off the course, two Hawkeyes — Gigi DiGrazia and Briana Midkiff — were named Women’s Golf Coaches Association (WGCA) All-American Scholars. Student-athletes must carry a minimum cumulative grade point average (GPA) of 3.50 to be selected to the All-American Scholar Team. DiGrazia earned Academic All-Big Ten honors and was also honored by the Big Ten Conference with the Distinguished Scholar Award — the Distinguished Scholar Award is presented to student-athletes who have earned a minimum grade-point average (GPA) of 3.7 or higher for the previous academic year.

In her first season as the head coach of the UI women’s golf program (2011-12), Menzel`s squad improved, both on the course and off the course. The Hawkeyes recorded top-five finishes in five out of 11 tournaments, including a first place finish at the Wyoming Cowgirl Classic. Additionally, Menzel’s team had seven individual top-10 finishes, highlighted by two runner-up finishes by Chelsea Harris and Kristi Cardwell. In the classroom, Gigi Digrazia earned Academic All-Big Ten Honors.

During her most recent coaching stint with the Jayhawks, Menzel recruited the first individual conference champion at KU, while helping the program improve its overall conference and national rankings. She also initiated an $800,000 fundraising effort to improve the Kansas facilities and created the program’s booster organization.

Menzel’s first coaching opportunity came at Boise State, where she was in charge of the program during the 1998-99 campaign at the age of 23. She recruited the first ever individual NCAA Regional qualifier in Bronco history.

Following one season in Boise, Menzel took over as head coach at Colorado State in July of 2000. During her stint with the Rams, she recruited and coached the 2002 Mountain West Conference individual champion. Her squad qualified for NCAA Regionals in 2001 and 2002 and claimed the 2001 CSU Invitational team title.

Academically, Menzel’s team led the CSU Athletics Department in cumulative grade point average during the 2001 season, and she coached three academic all-conference student-athletes during her stint at the school.

Menzel graduated from New Mexico in 1998 with a bachelor’s degree in elementary education. She is an LPGA Apprentice and A.C.E. certified personal trainer. She also holds golf fitness certification levels I and II from the Titleist Performance Institute.

Menzel, who was born in Cedar Rapids, Iowa, is married to Craig Menzel and the couple has three children — Kennedy, Callie, and Maclayne.