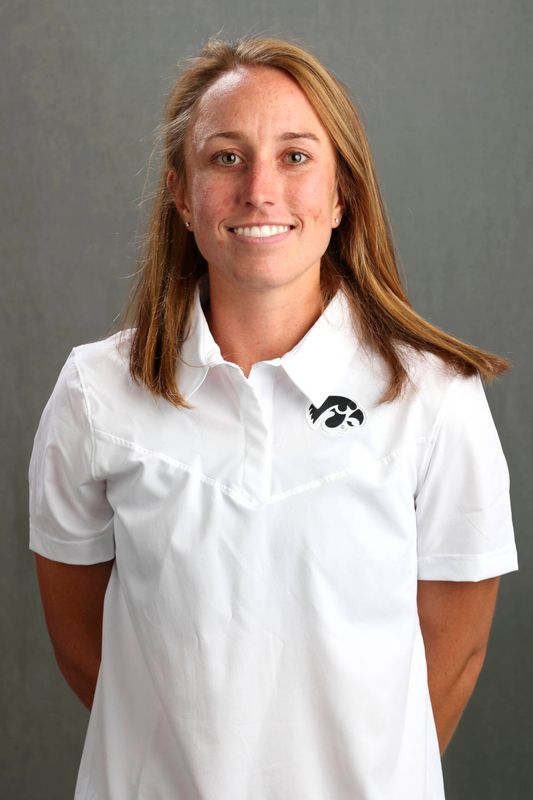 Katelyn Longino is entering her fifth season as an assistant coach with the University of Iowa soccer program.  She joined the Hawkeyes in 2018 following coaching stints at Valparaiso, Xavier, and Columbus State.

In four seasons, Longino has helped the program to 42 victories, two NCAA Tournament appearances and the first Big Ten title in school history.

In 2021, Longino helped Iowa to a 12-6-2 season and a winning 5-4-1 record in the Big Ten.  The Hawkeyes advanced to the Big Ten Tournament semifinal with a 1-0 first round victory at Michigan State before falling to Rutgers in Piscataway. Five Hawkeyes earned Big Ten Conference postseason honors. Sara Wheaton was named to the All-Big Ten second team, while Alyssa Walker and Hailey Rydberg picked up third-team honors. Addie Bundy was a unanimous selection on the All-Freshman team and Riley Whitaker was one of 14 players to earn the conference sportsmanship award. The 2021 postseason team marks the first time in 21 years Iowa had three players named to one of the top three All-Big Ten teams. In 2000, Sarah Lynch (first team), Julie Atkocaitis (second team) and Kate Walse each earned all-conference recognition.

During the 2020 season, Longino helped the team to its second straight NCAA Tournament berth.  After starting the season slowly, the Hawkeyes were playing their best soccer when matter most — in the postseason.

Iowa was one of the Big Ten’s most potent offenses, ranking second in the league and 26th nationally.  The Hawkeyes had an NCAA-best 16 different goal scorers in 2019.  Defensively, Iowa posted eight shutouts and limited opponents to seven or fewer shots in 13 games.

During her first season in Iowa City, Longino helped the Hawkeyes to an 8-7-3 overall record and a 4-5-2 mark in Big Ten play.  Iowa was in Big Ten Tournament contention until the final game, but fell short after battling Northwestern to a 1-1 draw.  Junior Natalie Winters was a third-team all-region and third-team All-Big Ten selection — Iowa’s first all-region honoree since 2014.

Longino spent the 2017 season with the Crusaders in their first season in the Missouri Valley Conference.  Valpo won nine games and finished 3-4 in MVC play.  She spent the 2016 season at Xavier, helping the Muskateers to seven wins.

Longino played as a freshman at Columbus State, helping the team to 18 wins and a berth in the NCAA Division II Sweet 16.  From there, she transitioned into coaching, serving as a student assistant for two seasons, helping guide CSU to a 21-1-1 record and an Elite Eight appearance in 2014.

In her final year at Columbus State, Longino served as an intern in the athletics department, working directly with women’s soccer as the team won 22 matches and reached the national championship match.

Longino, who holds a USSF “C” coaching license, has held coaching positions with the Ohio Elite Soccer Association, CFC Red Star, and Columbus Youth Soccer. Longino also holds a United Soccer Coaches Sports Performance Diploma. She graduated from Columbus State in 2016 with a bachelor’s degree in exercise science and she received her master’s degree in coaching education and athlete development from Xavier in 2018.