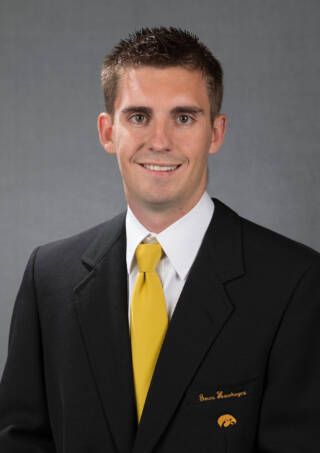 Kyle Denning is in his eighth season on the Iowa basketball staff, his first as director of operations after previously serving four years as assistant director of basketball operations and two seasons as a graduate student manager.

Denning handles many of the business and operational functions for the UI basketball program, including staff and team travel, supervision of student managers and serving as a liaison with compliance and student-athlete academic services.

Seven of the last eight seasons while on staff, the Hawkeyes have finished in the upper division of the Big Ten and had a first-team All-Big Ten honoree six times.

Since 2019, Denning and the Hawkeyes won 20+ games, have been a mainstay in the national rankings and NCAA Tournament, and captured the 2022 Big Ten Tournament championship.

Denning was a member of a staff that coached consensus first-team All-Americans each of the last three seasons: Luka Garza (2020 and 2021) and Keegan Murray (2022). Garza was also a two-time National and Big Ten Player of the Year, including winning the 2021 Naismith Trophy and John R. Wooden Award, while Murray was also the recipient of the Karl Malone Power Forward of the Year Award and finalist for the Wooden and Naismith.

In 2021, Iowa won 14 Big Ten regular season games, its highest total since 1987. The Hawkeyes earned a No. 2 seed in the NCAA Tournament, tying its highest ever seed in tournament history.

Denning graduated in May 2015, with a degree in leisure studies from the University of Iowa. He completed his master’s degree in sport and recreation management in May 2019.

Denning and his wife, Margaret, have an infant son, Jacob.