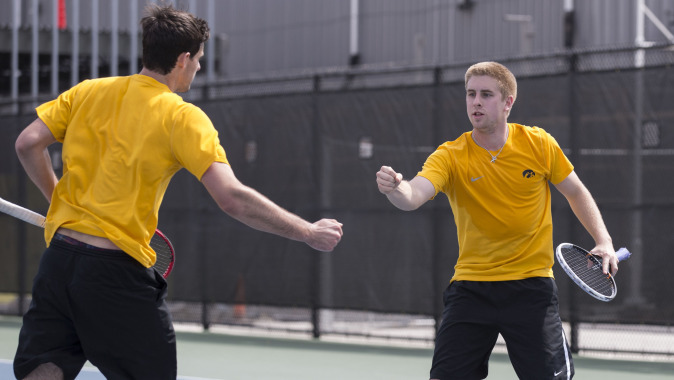 THIS WEEK
The University of Iowa men’s tennis team begins postseason play as the Hawkeyes travel to East Lansing, Mich., for the 2014 Big Ten Tournament. Iowa, the No. 12 seed, will play the 32nd-ranked Northwestern Wildcats, the tournament’s No. 5 seed. First serve will take place at 10 a.m. (ET) on Thursday. This marks the second consecutive year in which the two teams will meet in the first round of the tournament. Last year the Wildcats knocked off the Hawkeyes, 4-1, in Columbus, Ohio.

TOURNAMENT CENTRAL
Looking for more information regarding the Big Ten Tournament, including live state, recaps, box scores, and quotes? Head over to the Tournament Central page, found at (www.msuspartans.com/sports/m-tennis/spec-rel/bigten-champ-2014.html)

LIVE STATS
Live stats for the match against Northwestern can be found on the tournament central page, found above. The Iowa men’s twitter account will also be live-tweeting the match for fans following along.

DIERCKX IN THE RANKINGS
Senior Jonas Dierckx has saved his best tennis for the home stretch. The native Lommel, Belgium, has recorded two victories over ranked opponents in his past three matches, and is being recognized for his performance.

Dierckx is ranked No. 124 in the ITA Singles rankings released on April 22. The ranking marks the first of Dierckx’s career and the first Hawkeye to appear in the singles rankings since Marc Bruche was ranked 93rd on Jan. 3, 2012.

LAST TIME OUT
The Hawkeyes concluded the regular season Sunday at No. 22 Penn State. Iowa fell by a 6-1 final, but senior Jonas Dierckx recorded a milestone victory.

Dierckx, playing at the No. 1 singles position, took on the 33rd-ranked player in the country in Leonard Stakhovsky. In the first set, Dierckx was able to collect a couple of breaks en route to a 6-3 first set victory.

SCOUTING NORTHWESTERN
No. 32 Northwestern (19-9, 7-4) enters the match on a seven-game winning streak, including a pair of 7-0 sweeps to end the season. The Wildcats knocked off the Hawkeyes, 5-2, on Iowa’s senior day back on April 13.

The team is paced by No. 46 Raleigh Smtih and No. 120 Sam Shropshire atop the singles lineup and feature Mihir Kumar and Raleigh Smith as the No. 28 doubles team.

Two weeks ago when the Hawkeyes and Wildcats met, Iowa picked up wins at the No. 1 and No. 4 positions behind Jonas Dierckx and Matt Hagan. Dierckx defeated then No. 54 Smith in three sets after Smtih retired due to injury, trailing 1-0 in the third set. Hagan defeated Mihir Kumar in straight sets, 7-6 (7-0), 6-3.

QUOTING HOUGHTON
“Northwestern is a good team but when we played them recently it was a very close match. It was a 5-2 score but had the feel of a 4-3 match. From a matchup standpoint and confidence standpoint, we have a good chance at winning. Six seniors are down to their final tournament so they will be inspired by that. They have played hard and practiced hard all year and if they do that against Northwestern then we will have a really good chance.”