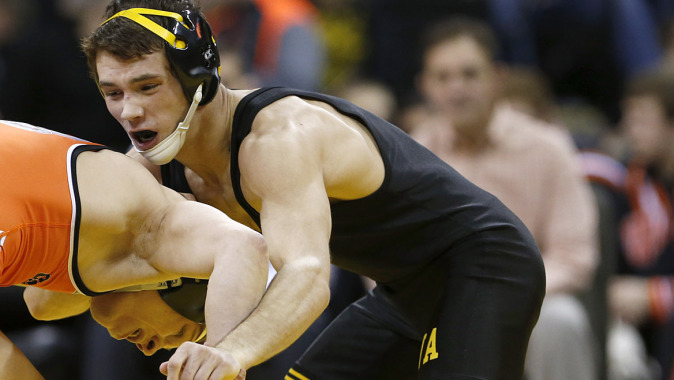 MADISON, Wis. — University of Iowa redshirt freshman Thomas Gilman scored three points in the closing seconds to defeat Nathan Tomasello, 3-2, in the championship round of the 2014 FILA Junior World Team Trials on Friday in Madison, Wisconsin.

Gilman swept Tomasello in the best-of-three 55 kg finals and will represent Team USA at the Junior World Championships in Croatia on Aug. 5-10.

He defeated Tomasello, 8-4, in the first round of the finals, and erased a 1-0 deficit with a double-leg takedown in the final 25 seconds of Round 2.

“I knew I could get to his legs. I didn’t do it much that second match, but I was moving him good, so I wasn’t really worried about it,” Gilman said. “I got to his legs and ended up in a stalemate. I was a little anxious after that, but I knew if I just kept moving him something would open up. I caught him on his heels and finished on a double-leg.”

It is the second year in a row he swept Tomasello in the finals to make the U.S. World Team. He advanced to the championship round after winning by pin and medical forfeit in the challenge tournament.

“It’s a little different this year,” Gilman said. “Last year it felt like a big accomplishment trying to make the team. This year it is an accomplishment, but I was (in Bulgaria) and didn’t win a medal, and that’s what this is all about. It’s not about winning this tournament. It’s about going overseas and competing and bringing home hardware. I’m using this as a stepping stone leading into my training for the World Championships. That’s the main goal.”

Redshirt freshman Sammy Brooks and freshman Brandon Sorensen reached the finals of the challenge tournament but were unable to advance to the championship round. Brooks was 2-2 overall at 84 kg, and Sorensen was 3-2 at 66 kg.