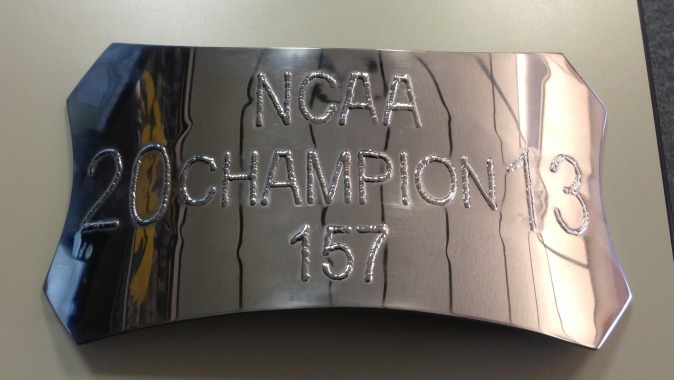 Few things match the University of Iowa wrestling program’s excellence. The Hawkeyes won their first national team title in 1975 and have added 22 more. Since 1975, 68 UI wrestlers have won individual national titles. The majority of them were awarded a homemade belt buckle commemorating the feat by collegiate super fan Tommy Thompson. The custom is kept alive today by the sibling combination of Kevin Urban and Rita Jelinek, who operate Midwest Metal Products in Cedar Rapids, Iowa.

“It is a privilege to be associated with a program that has tradition and history like Iowa wrestling,” Urban said. “We’re more than happy to do anything we can to help perpetuate championship performances.”

Somewhere around the Kurdelmeier-Dan Gable coaching tenures is when the championship belt ritual was started by Thompson, who knew Nile Kinnick and attended 751 UI football games before his death in 2013 at age 86. Wrestling was perhaps Thompson’s favorite sport, and he watched home duals huddled around Hawkeyes on the team bench.

Thompson, Urban’s father, and Urban’s eventual stepfather worked together at Cherry Burrell Co. in Cedar Rapids, where Thompson was a world-class stainless steel welder. Thompson made the first championship belts by hand in his basement, taking them to Midwest Metal Products for buffing.

Soon Midwest Metal Products began laser cutting the buckle portion and Thompson had plenty of material to work with at home.

“He had enough stock-piled, that we hadn’t seen Tommy in about 10 years,” Urban said.

When Derek St. John won a 157-pound national title in 2013, the question arose. With Thompsons’s death, would the belt tradition continue?

The folks at Midwest Metal Products stepped to the top of the podium. What Thompson once did by himself now takes six people 20-25 hours. And that is for just one buckle. Urban said the thought of ending the tradition never crossed his mind.

“Once you hear the message from (current UI head coach) Tom Brands about how much those belts mean to the wrestlers,” Urban said. “He said it meant more to him than getting the NCAA championship medal. It’s the hand craftsmanship; somebody has to weld it, it’s custom, and there is only one of them in the world.”

“I saw it and it was a motivating factor,” Brands said. “Every little bit of motivation helps. And when you see those big old belts, that’s pretty good motivation. You want to be a member of the club. We want to take home all the hardware and that’s some nice hardware.”

Ramos followed St. John by winning the 133-pound title in 2014. When time permits, the buckles are typically presented to the UI at the annual postseason awards banquet.

Urban is 64, but the NCAA championship belts will be made even after he retires.

“Our company is going to continue to make them in the Thompson tradition,” Urban said.

Speaking of tradition, Midwest Metal Products has purchased tickets for University of Iowa football and basketball games since 1973. Last season it bought 29 tickets to every home football game, 14 for every wrestling dual, and 12 for every men’s basketball game.