DiIanni Era Begins on the Road 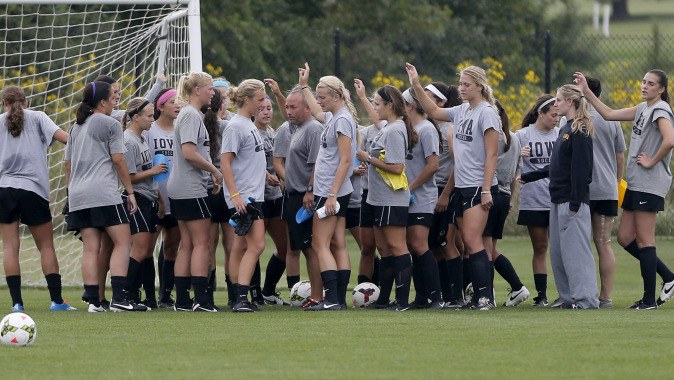 THE MATCH-UP
The University of Iowa women’s soccer team opens the 2014 regular season with a pair of road matches. The Hawkeyes travel to Cedar Falls, Iowa, on Aug. 22 to take on in-state foe Northern Iowa at the Cedar Valley Soccer Complex’s Premiere Field at 7 p.m (CT). Iowa is back in action Aug. 24 for a matchup with the University of Illinois-Chicago at Wish Field in Chicago. Sunday’s contest is slated for a 1 p.m. start time.

ON THE WEB
Iowa soccer fans can follow both contests via live stats (GameTracker) on hawkeyesports.com. Click on the “GT” link found on both the front page and the soccer schedule page to access the live stats feed.

NORTHERN IOWA VS. IOWA — THE SERIES
? Iowa is unbeaten against Northern Iowa, leading the all-time series, 11-0.
? Last season, the Hawkeyes posted a 2-1 overtime victory over the Panthers.
? In the 11 game series, Iowa has outscored Northern Iowa, 35-4, and held the Panthers scoreless in eight matches.

SCOUTING ILLINOIS-CHICAGO
The Flames are a first-year program this season and are coached by Brain Rigby. The 25-player roster features 20 freshmen, four sophomores, and one junior in Flo Beshiri.

ILLINOIS-CHICAGO VS. IOWA — THE SERIES
Sunday marks the first meeting in the all-time series between the two schools.

LAST GAME
The Hawkeyes fell to DePaul, 1-0, on Aug. 14 in an exhibition match in Chicago. The Hawkeyes tallied three shots on goal, but were unable to connect with the back of net. It wasn’t until the 81st minute that DePaul scored what was the eventual game-winning goal.

DIIANNI IN GOOD COMPANY
In 11 seasons at Grand Valley State, head coach Dave DiIanni posted a 221-18-18 overall record for a .895 winning percentage. The mark is the third-best all-time in women’s soccer history.

NONCONFERENCE DOMINANCE
Over the past three seasons, Iowa has been dominant in non-league competition. The Hawkeyes have compiled a 25-1 nonconference record during the stretch.

Iowa’s only nonconference blemish came against No. 23 Notre Dame in last year’s opening round of the NCAA Tournament.

During the three-year period, the Hawkeyeshave outscored their opponents, 76-16.

SENIOR EXPERIENCE
Senior Melanie Pickert has started all 64games of her Iowa career, while fellow seniors Caitlin Brown and Cloe Lacasse have started 63-of-64 games as Hawkeyes.

LEADER OF THE DEFENSE
Junior Hannah Clark returns in goal after a successful run as a sophomore.

TRANSFER ADDED
Sophomore Natalie Krygier joined the Hawkeye soccer program this fall after spending one year at the University of Connecticut.

Krygier played in six games as a true freshman, helping the Huskies to an 11-9 overall record in the American Athletic Conference.

LACASSE HISTORICALLY SPEAKING
In three years, junior Cloe Lacasse has made her mark on the Iowa soccer program.

Lacasse led Iowa in goals scored, points, and shots taken in both the 2011 and 2012 seasons.

HAWKEYES ON TV
The Hawkeyes’ Sept. 25 home contest against Maryland will be broadcast live on BTN. The match will begin at 2:30 p.m. (CT).

The BTN will also be televising the Big Ten Tournament from Nov. 5-9 in West Lafayette, Indiana

B1G IN THE POLLS
Michigan, Nebraska, and Penn State are ranked in the initial NSCAA Top 25 poll of the 2014 season.

Michigan is ranked No. 7 in the poll, Nebraska came in at No. 13, and Penn State was voted No. 24. Illinois is receiving votes.

NEXT UP
The Hawkeyes will open their home schedule on Aug. 29 against Fresno State at 7 p.m. at the Iowa Soccer Complex.