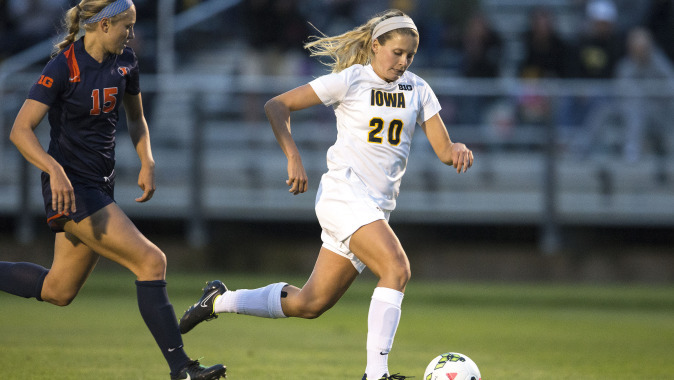 THE MATCH-UP
The 13th-ranked University of Iowa soccer team returns to Iowa City for a pair of home contests against Big Ten newcomers Maryland and Rutgers. The Hawkeyes host the Terrapins on Thursday at 2:30 p.m. (CT) at the Iowa Soccer Complex before facing the Scarlet Knights on Sunday at noon. Thursday’s matchup will be broadcast live on the BTN.

ON THE TUBE
Thursday’s game will be televised live on the Big Ten Network. Lisa Byington will handle the play-by-play, while Danielle Slaton will serve as the color commentator.

ON THE WEB
Iowa soccer fans can follow Thursday and Sunday’s contests via live stats (GameTracker) on hawkeyesports.com. Click on the “GT” link found on both the front page and the soccer schedule page to access the live stats feed. Fans can also follow @HawkeyeSoccer for live in-game updates.

PROMOTIONS
? Thursday is “Student Day” at the Iowa Soccer Complex with free pizza and pop provided (while supplies last). UI students can also register to win an Xbox one and a game of FIFA World Cup 2014. The first 75 fans will receive a free BTN foam finger.
? Sunday is Junior Hawk Club and Camper Reunion Day. The first 50 fans will receive an Iowa soccer scarf, while one fan will win two tickets to the Iowa vs. Indiana football game on Oct. 11.

QUICK HITTERS
? At 3-0 in Big Ten play, Iowa is off to its best start in league competition in program history.
? Iowa climbed three spots to No. 13 in the Soccer America rankings that were released on Sept. 23. It is the highest ranking in program history.
? The Hawkeyes are also 25th in the Top Drawer Soccer rankings, receiving votes in the NSCAA poll, and 68th in the first NCAA RPI rankings.
? Iowa has a Big Ten-leading seven shutouts in nine games this season, four by Hannah Clark and three by Kiley Beck. Clark is riding a streak of four-consecutive shutouts and 363:13 scoreless minutes.
? The Hawkeyes are the only team in the Big Ten that has yet to surrender a goal in conference play. Clark has 12 saves in three league games.
? Iowa will face its first ranked opponent of the season against No. 17 Rutgers on Sunday. The Hawkeyes went 3-4 against ranked opponents last season with the three victories being a single-season high for the program.
? Senior Cloe Lacasse is tied for second in the Big Ten with seven goals and is third with 18 points and 40 shots.
? Iowa has used seven different starting lineups in nine games this season. Senior Marissa Hurt made her first career start Sept. 14 against Northwestern, and Brooke Backes made her first start of the season Sept. 20 at Minnesota.

SCOUTING MARYLAND
Head coach Jonathan Morgan’s Terrapins are 3-3-2 overall and 1-1-1 in conference play after going toe-to-toe with Michigan State in a scorless tie on Sept. 21. Eight different players have scored a goal for Maryland this season, including Alex Doody, who leads the team with two. Rachelle Beanlands has started all eight games in goal for the Terrapins, posting a 0.83 goals against average with 28 saves. Hobbs has posted three shutouts on the year.

MARYLAND VS. IOWA — THE SERIES
Thursday marks the first meeting between Maryland and Iowa.

SCOUTING RUTGERS
At 6-1-0 overall and 2-1-0 in the Big Ten, Rutgers is ranked 17th in the latest poll released by Soccer America. The Scarlet Knights travel to Iowa City riding a two-game win streak, after shutting out both Michigan State and Michigan, 1-0, on Sept. 19 and Sept. 21. Freshman Casey Murphy has started in all seven games in goal for Rutgers, logging 627:25 minutes. Murphy is tied for the Big Ten lead in shuouts with four and owns the second-best goals against average at 0.43. Eight different players have scored for the Knights, who are outshooting opponents, 107-53.

RUTGERS VS. IOWA — THE SERIES
The first and only time Iowa and Rutgers competed against eachother was in 2003 when the Hawkeyes defeated the Scarlet Knights in Iowa City, 2-1.

LAST GAME
Iowa blanked Minnesota, 1-0, to post its seventh overall and fourth consecutive shutout of the season. Iowa’s lone goal came in the 33rd minute when sophomore Amanda Lulek sent in a header past Minnesota goalkeeper Tarah Hobbs after fellow sophomore Bri Toelle secured the loose ball at the top of the box. The goal was the first goal of Lulek’s career, and the assist was Toelle’s fourth this season.

IOWA CLIMBS TO 13TH
The Hawkeyes climbed three spots to No. 13 in the Sept. 23 Soccer America rankings, the highest ranking in program history. Iowa is 1-of-5 Big Ten teams in the poll. Iowa also broke into the Top Drawer Soccer Top-25, coming in at No. 25. The Hawkeyes are also receiving votes in the NSCAA poll for the second-straight week.

IOWA FIFTH IN REGIONAL RANKINGS
For the second-straight week the Hawkeyes find themselves at the No. 5 spot in the NSCAA Great Lakes Region rankings. Big Ten schools occupy eight of the ten spots in the team rankings.

CLARK EARNS B1G HONOR
Junior Hannah Clark was tabbed as the Big Ten Co-Defensive Player of the Week on Sept. 23 following her performance in Iowa’s 1-0 shutout victory at Minnesota. The Colorado native made five saves in the game en route to her fourth consecutive shutout.

HONORS ALL-AROUND
? Senior Melanie Pickert and sophomore Corey Burns were named to Top Drawer Soccer’s Team of the Week on Sept. 16 after leading Iowa to a pair of shutout victories over Illinois and Northwestern.
? Pickert was also named CS 360’s National Primetime Player of the Week on Sept. 16.
? Junior Hannah Clark was tabbed as the Big Ten Conference Player of the Week by College Sports Madness on Sept. 16. She made a combined seven saves in a pair of shutouts over Illinois and Northwestern.

FIRST GOALS = GAME WINNERS
In each of the past two games, Iowa has gotten a game winner on a first career goal. The Hawkeyes’ downed Northwestern, 1-0, on Sept. 14 courtesy of Corey Burns’ first career strike off a corner kick. On Sept. 20, sophomore Amanda Lulek headed in her first goal in a 1-0 Hawkeye victory at Minnesota — Iowa’s first win in Minneapolis since 2007.

THE HAWKEYES ARE…
? 5-1 when leading at the half
? 8-1 when scoring first this season

STELLAR DEFENSE
If you don’t shoot, you can’t score. Iowa’s defense has allowed four or fewer shots on goal in 7-of-9 games this season, and the Hawkeyes have allowed fewer than 10 shots in three contests.

HAWKEYES DISTRIBUTING
Iowa has tallied 16 assists through nine games this year, which puts it in a tie for fifth in the Big Ten standings. Five different Hawkeyes have at least two assists this season with senior Cloe Lacasse and sophomore Bri Toelle leading the team with four.

NEWCOMERS SHINE
– Freshman Katharine Woodruff got the Hawkeyes on the scoreboard in 2014 when she netted the game-winning goal in the 1-0 double-overtime win at Northern Iowa on Sept. 22.
– Natalie Krygier, a transfer from Connecticut, is tied for second on the team with three assists. The sophomore registered a pair of assists in Iowa’s 3-0 victory over Fresno State on Aug. 29.

BROWN: A CONSTANT
Senior Caitlin Brown is the only Iowa player to log every minute of game action this season. The defender has played every minute for the past 43 games dating back to the 2012 season — a streak of 4,079 minutes.

SENIOR EXPERIENCE
Senior Melanie Pickert has started all 73 games of her Iowa career, while fellow seniors Caitlin Brown and Cloe Lacasse have started 72-of-73 games as Hawkeyes.

LACASSE HISTORICALLY SPEAKING
In three-plus years, junior Cloe Lacasse has made her mark on the Iowa soccer program. The Sudbury, Ontario, native is currently second in career goals (38), points (100), shots (264), game-winning goals (12), and assists (24). Lacasse led Iowa in goals scored, points, and shots taken in both the 2011 and 2012 seasons. She capped off her junior year by garnering second-team All-Big Ten selection and second-team NSCAA All-Great Lakes Region honors.

HAWKEYES ON TV
The Hawkeyes’ Sept. 25 home contest against Maryland will be broadcast live on BTN. The network will also be televise the Big Ten Tournament from Nov. 5-9 in West Lafayette, Ind. Iowa will also appear four times — Illinois (Sept. 11), Northwestern (Sept. 13), Indiana (Oct. 17), and Purdue (Oct. 19) — on BTN Plus (which can be accessed via www.btn2go.com).

B1G IN THE POLLS
Penn State, Wisconsin, Illinois, and Rutgers are ranked in the latest NSCAA Top 25 poll of the 2014 season. The Nittany Lions are ranked No. 8, the Badgers follow at No. 13, llinois checks in at No. 19, and the Scarlet Knights come in at No. 25. Michigan and Iowa are both receiving votes.

NEXT UP
The Hawkeyes return to action Oct. 2, playing the first of three-straight road games at Michigan State beginning at 4 p.m. (CT).