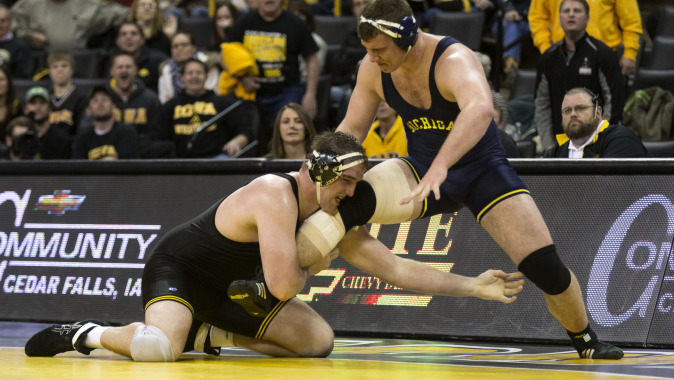 IOWA CITY, Iowa — The University of Iowa Wrestling Program announced Thursday that the 2014-15 season will open Nov. 15 at the Luther Open in Decorah, Iowa.

The Hawkeyes were originally scheduled to open the season hosting the Iowa City Duals on Nov. 21. That date has not changed. Baker University, Cornell College, and Iowa Central open the home schedule beginning at 9 a.m. (CT).

Iowa hosts Iowa State in the Iowa Corn Cy-Hawk Series on Saturday, Nov. 29 at 7 p.m. (CT). That is a change from the original schedule released in August.

The Iowa City Duals and Cliff Keen National Duals are part of the 2014-15 season ticket package. Contact the UI Athletics Ticket Office over the phone at 1-800-IA-HAWKS, online at hawkeyesports.com, or in person at Carver-Hawkeye Arena for season ticket information.

Changes to Iowa’s road schedule have also been announced. The Hawkeyes wrestle Minnesota in Minneapolis on Friday, Jan. 30, not Sunday, Feb. 1, as originally announced.

Television dates and a complete list of start times will be announced at a later date.