Hawkeyes in Good Hands with Brooks 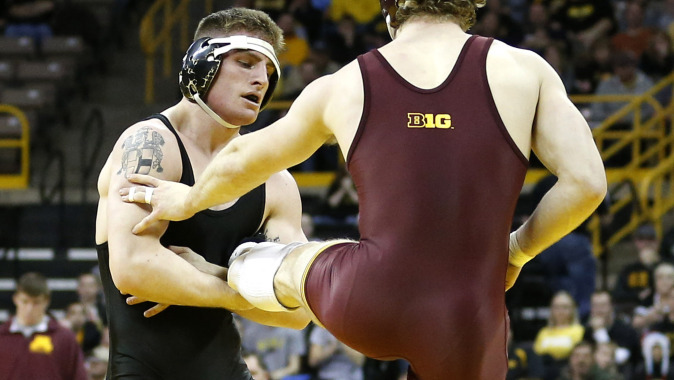 Brooks didn’t unseat two-time All-American Ethen Lofthouse last season in the Dan Gable Wrestling Complex, but he gave a yeoman relief effort in 10 dual meets, winning seven times. He was 3-3 against competitors ranked in the top 16.

“Last year I wanted to be the guy, it wasn’t like I would just do my best when I got a shot,” Brooks said. “This year it is the same, except a bigger scale. Now it is `Alright, I’m going to win a national title and win matches by as many points as I can, no matter who I am wrestling or what the stage is.'”

The return of Brooks is good news for the Hawkeyes at a weight class that lost a veteran with 91 career wins and 63 dual starts.

“It makes me feel like we’re in good hands with Sam Brooks,” UI head coach Tom Brands said. “But we’ve got to do things where it doesn’t have to be a close match. It’s a seven-minute match, so you might as well wrestle it hard. The match doesn’t get shorter, it’s not a different time frame. It’s seven minutes, so wrestle it hard.”

Brooks admits there were situations last season when he convinced himself he was in a safe position rather than widening the gap. He doesn’t intend to repeat that mistake.

“In reality I could have made that into a flurry or another scramble or something that can turn the pace up and create more scoring opportunities,” Brooks said.

The native of Oak Park, Illinois (Oak Park-River Forest High School) is stronger. He has become more efficient, which he says should wear on opponents, and he is starting to pay attention.

“Every moment in every match makes a difference,” Brooks said. “Maybe the reason I didn’t get the spot was because I didn’t do something right in an earlier practice and it ended up biting me in the butt. I’m trying to work on that now so every time I step on the mat, whether it’s practice or a match, I am wrestling for the whole seven minutes.”

This season, Brands doesn’t want Brooks wrestling on “his terms.”

Brooks enters the season ranked seventh by WIN magazine, and 10th by Intermat. He won five of his last six matches last season; the lone setback during that stretch was 8-6 to Minnesota’s Kevin Steinhaus, who went on to place fifth in the NCAA Tournament.