Carton Attacks His Way to Contention at 141 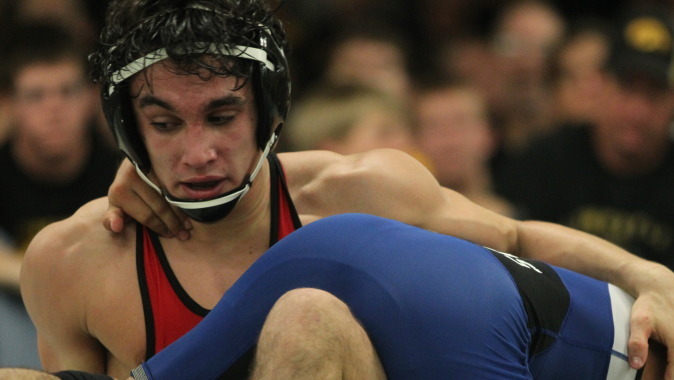 IOWA CITY, Iowa — Tom Brands might have had tongue firmly planted in cheek earlier this month when he referred to wrestling reporters in Carver-Hawkeye Arena as “30 of my best friends.”

But what he told them was honest as the day is long.

“You have a guy like (141-pounder) Topher Carton,” Brands said. “If you look at somebody you would give a most improved award to in the wrestling room, it would probably be him.”

That is an impressive compliment for a student-athlete who has yet to set foot on the mat in a dual meet. Carton, a redshirt sophomore from Rock Island, Illinois, was 175-2 with 99 pins in high school. He won three state championships, including the 119-pound title in 2011 for Davenport (Iowa) Assumption.

He was 6-7 wrestling unattached as a true freshman, then improved to 23-7 as a redshirt freshman. Carton’s first loss a year ago was in the 141-pound final at the Luther Open against teammate Josh Dziewa. Once again, Dziewa will be Carton’s main obstacle in the Dan Gable Wrestling Complex.

“Knowing (Dziewa) has that experience has helped elevate me mentally because you have to be prepared,” Carton said. “He has that mat savvy that comes with being a fifth-year year senior. He is a quality opponent and a leader in the room.”

In his first season as starter at 141, Dziewa was 27-10, placing fifth at the Big Ten Conference Tournament and qualifying for the NCAA Championships, where he was 2-2.

According to Brands, consistency from Carton is needed to overtake Dziewa on the depth chart.

“We still have to take another giant step,” Brands said. “I don’t think you take giant steps until you take little steps.”

Carton’s game plan is to attack.

“It is going to take me coming out and wrestling my match and putting on a show that everybody expects when they think Iowa wrestling,” Carton said. “They want offense and attacking. For me to be the guy it is going to come down to attacking. When I am relentless with my leg attacks I don’t think anybody can beat me.”

So far, Carton’s collegiate career has been marked by learning. His No. 1 lesson has been to fight.

The public praise from Brands indicated to Carton that he is on the right track and doing the right things.

“Everybody’s goal is to be on the top of the podium,” Carton said. “Now and I have to continue to do those things and keep evolving as a wrestler and competitor until I get to that top podium.

Iowa opens the season Saturday at the Luther Open beginning at 9 a.m. (CT) in the Regents Center in Decorah, Iowa. Twenty-five teams are scheduled to compete.