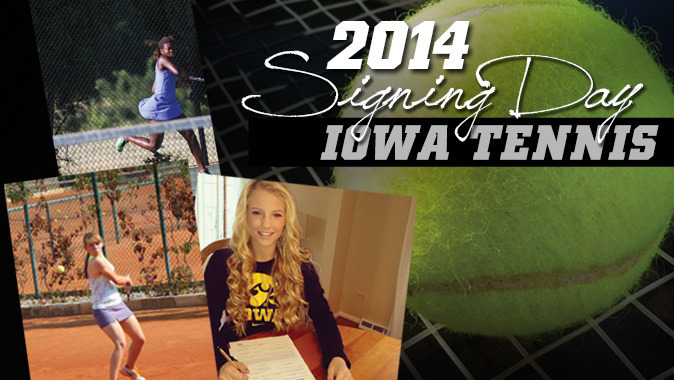 IOWA CITY, Iowa — The University of Iowa women’s tennis team announced Tuesday the addition of three signees to the roster. Zoe Douglas will be joining Iowa in the spring, while Kristen Thoms and Adorabol Huckleby will make their Hawkeye debuts in the fall of 2015.

Douglas will be added to the women’s tennis roster during the spring schedule. She is ranked No. 8 in U18 in England, holds the No. 1 rank in Cambridgeshire, and an ITF World Ranking of 1875.

“Zoe is joining the program in January and will add depth to both our singles and doubles lineups,” said UI head coach Katie Dougherty. “She has a big game and is crafty with great hands. Zoe is filled with confidence and energy and we can’t wait to have her in the black and gold.”

Thoms, a native of LaGrange, Illinois, is a four-star recruit on Tennisrecruiting.net and ranked No. 76 in the class of 2015.

“Kristen is a great fit for our program,” said Dougherty. “She is highly competitive, fast and athletic with weapons. She just started playing ITF tournaments and will benefit from the added international experience. Kristen is going to be a huge contributor to our program and the type of player I see getting better and better every year.”

Huckleby is a four-star recruit in the class of 2014. She committed to Iowa last year, but is competing at Wayne State until 2015. She will be a sophomore when she joins Iowa next fall.

“We had to wait a little bit longer than we anticipated to have Adorabol as a Hawkeye, but she’s worth the wait and we are excited to have her join the program in the fall,” said Dougherty. “Adorabol is a hard worker and she’s got a powerful game with a lot of weapons and a huge upside.”