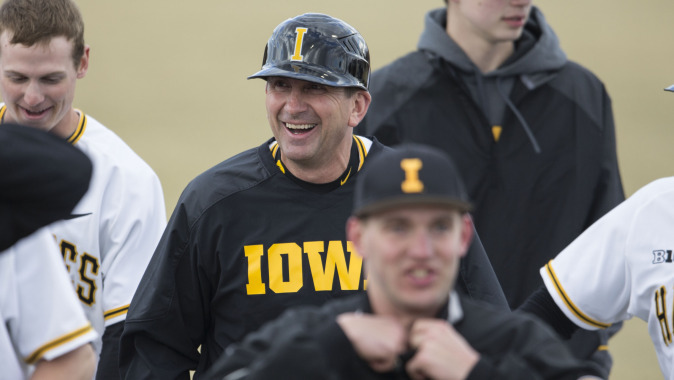 IOWA CITY, Iowa — University of Iowa head coach Rick Heller announced the signing of a 13-player recruiting class that will join the Hawkeye baseball program in 2016. The class, which has 11 players ranked among the top-500 prospects, is ranked No. 1 in the Big Ten Conference and as the 40th-best class nationally by Perfect Game.

“This is a talented and balanced class that could define our program for the next four years,” said Heller, who is entering his second season in Iowa City. “We knew from day one that the 2015 class would be important for the future of Iowa baseball.

“We will be losing eight seniors this spring and there is a possibility we could lose several juniors to the draft. We needed to bring in players who have the potential to step in and play right away, and I feel we did that.

“We were able to sign the best players in our state, as well as some great players from across the country. We are signing 13 quality student-athletes thanks to the tireless work of recruiting coordinator Marty Sutherland and pitching coach Scott Brickman. Thanks to these two guys, we have an outstanding 2015 class.”

Seven of the 13-players are in-state prospects, including the top six players in Iowa in the Perfect Game rankings. Four of the prospects are from Illinois and two from California. The class consists of six positional players, five pitchers, and two dual-position prospects. Two of the players are junior college recruits.

Coach Heller on Baker:
“Cole is an excellent right-handed pitcher with a tremendous upside. He has an upper 80s to 90 mph fastball with a 3/4 arm slot. Cole is a tough kid who competes and wins. We love the fact that he has wrestled his entire high school career because it tells you a lot about his make-up. He has the potential to be a great leader, and we couldn’t be more excited that Cole will be a Hawkeye.”

Coach Heller on Boe:
“Mitch is a hard-nosed, gritty player who shows up with a hop in his step every day. We love his energy and his love of the game. Mitch is a quality defensive middle infielder with a plus throwing arm and a solid left-handed bat. He is a great leader that we are excited to have in our program.”

Coach Heller on Comito:
“Chris is a hard throwing (90 mph this fall) right-hander with a good breaking ball. He is a proven winner, competes well, and has great leadership potential. Chris has a huge upside and a bright future at Iowa. We love that Chris can already pound the strike zone, which should allow for him to compete early in his career. We are thrilled Chris has chosen to be a Hawkeye.”

Coach Heller on Daniels:
“Zach is a fantastic all-around player. On the mound, he is one of the best pitchers in our state, and we love his competitiveness. As a position player, he put up big numbers offensively, is an excellent middle infielder, and has plus speed. He also is an excellent student and a solid leader. We couldn’t be happier that Zach will be a Hawkeye.”

Coach Heller on Evans:
“Dametri is an excellent catcher with plus arm strength, and we love his bat. He is an aggressive hitter, who we believe will hit for power. Dametri is a solid leader, who can already control a pitching staff. We are excited to have Dametri in our program.”

– Ranked as the 183rd-best prospect nationally by Perfect Game and the top player in Iowa, receiving a grade of 10
– Ranked as the 78th-best prospect nationally by Prep Baseball Report
– 2014 Perfect Game Underclass High Honorable Mention
– 2014 Second-Team Louisville Slugger High School All-American
– 2013 Perfect Game Underclass Honorable Mention
– First-team Class 2A all-state by IHSBCA and INA
– MVP of the NICL Conference as a junior
– Recipient of the Gene Schultz All-Opponent Award as a junior
– Two-time all-conference, all-district,and all-metro honoree
– All-WaMac and all-metro honoree as a sophomore
– Hit .481 with 45 runs, 16 doubles, five triples, six home runs, 43 RBIs, and 15 steals as a junior; hit .435 with four home runs, 52 RBIs, and 30 runs to lead team to 2013 state tournament; hit .429 with six home runs and 39 RBIs as a freshman
– Began varsity career as an eighth grader at Denver High School, where he hit .413 with three home runs and 23 RBIs
– State qualifier in track and field, placing fifth in the discus… also was 10th in discus at the Drake Relays in 2014
– Won the United States and Canada Pitch, Hit, and Run baseball competition during the 2009 MLB All-Star Game in St. Louis

Coach Heller on Farley:
“Luke will bring a big-time bat to our program. He is a tough, disciplined kid, who has plus power. He is an extremely hard worker and loves to play. Defensively, Luke has the versatility to play several positions and runs well. We are happy that Luke has chosen to be a Hawkeye.”

– Led NIACC in walks (30) and home runs (5) as a freshman; scored 30 runs and drove in 27 RBIs in 54 games
– 2013 Central Region honorable mention selection by Perfect Game
– Class 4A first-team all-state honoree after hitting .496 with six home runs, 14 doubles, and 36 RBIs
– Three-time All-MVC and all-district honoree, earning first-team honors as a junior and senior
– Hit .413 with five home runs, 29 RBIs and seven doubles as a sophomore and .368 with 16 doubles, five home runs and 31 RBIs as a senior

Coach Heller on Fricke:
“Zach is an athletic junior college catcher who can hit. He possesses a 90-plus mph arm and has the versatility to help out in the bullpen. Defensively, he does a great job of managing the pitching staff. Zach also has a solid left-handed bat and runs well. We are thrilled that Zach has chosen to be a Hawkeye.”

Coach Heller on McCoy:
“We feel Mason is the top junior college shortstop in the Midwest. He is an outstanding all-around player who put up big numbers as a freshman. Mason brings excellent leadership qualities to our program, and we love the energy he brings to the field every day. He is a great fit for our team, and we are thrilled Mason has chosen to be a Hawkeye.”

– Ranked as a Top-500 prospect nationally by Perfect Game
– Two-time all-state selection, earning second-team honors as a junior and a third-team distinction in 2012
– Three-time all-conference and all-district pitcher
– Team captain in baseball and football
– Member of the National Honor Society
– Went 10-3 with a 0.98 ERA in 2013, striking out 152 over 83 1/3 innings; went 2-0 with a 0.39 ERA in 2014 with 29 strikeouts in 18 innings… currently rehabbing from UCL surgery
– Second-team all-state selection in football in 2013, all-conference in basketball (2012-13), and a state qualifier in three events in track and field (4×100, 4×200, shuttle hurdle)… finished sixth in state in shuttle hurdle

Coach Heller on McDonald:
“Cole was one of the top strikeout pitchers in the state before his elbow injury last summer. He possesses a plus slider to go with his upper 80s mph fastball. Cole is a multi-sport athlete who is a fierce competitor and an excellent student. Cole should be 100 percent by the beginning of fall practice. We are happy that Cole will be a Hawkeye.”

– Ranked as the 482th-best prospect nationally by Perfect Game
– First-team all-state, Super Team all-state
– MRAC Player of the Year
– Sioux Land Sports Authority All-American
– Two-time first-team all-district, All-Western Iowa, and all-conference selection
– Vice President of National Honor Society
– Academic all-conference honoree in baseball, track and field, and basketball
– Led the state with a .540 batting average to go along with 41 runs, 19 doubles, one triple, two home runs, 46 RBIs, and eight steals as a junior
– Third-team all-state and all-conference honorable mention in football as a sophomore… honorable mention all-conference in basketball as a junior… had 58 receptions for 799 yards and 11 touchdowns as a senior, ranking sixth in the state in receiving for tight ends.

Coach Heller on Neustrom:
“Robert is one of the best all-around athletes in the state. He put up huge numbers this summer and has a tremendous upside; he has all the tools. With his size, strength, and speed, we believe Robert will be a fantastic all-around player. He is also an outstanding student and has great leadership qualities. We couldn’t be happier that Robert will be a Hawkeye.”

– Ranked as a Top-500 prospect nationally by Perfect Game and as one of the top prospects in the nation by “The Scouting News”
– Offensive MVP in 2014
– Two-time all-conference and all-tournament selection
– Led team in every offensive category in 2014
– Hit .522 with six doubles, four triples, and one home run in 2014

Coach Heller on Perry:
“Daniel is an athletic shortstop who we feel will be an outstanding all-around college player and a strong offensive middle infielder. He is a multi-sport athlete, who will bring a plus make-up and excellent leadership qualities to our program. We are all excited Daniel has chosen to be a Hawkeye.”

– Ranked as the 325th-best prospect nationally by Perfect Game
– Ranked as the ninth-best player in Illinois by Prep Baseball Report
– 2014 all-conference selection
– 2014 second-team all-area honoree
– Three-time Honor Roll recipient
– Went 4-2 with a 2.01 ERA, striking out 61 over 45 innings in 2014… pitched a complete game no-hitter in regional semifinal… pitched a complete game as sophomore to win the regional title
– All-conference honoree in basketball

Coach Heller on Ritter:
“Shane is an athletic right-handed pitcher who throws hard with a swing-and- miss slider. Shane has a big upside, and we love how he competes. He is a multi-sport athlete who brings great make-up and leadership qualities to the program, and is an outstanding student. We are excited to have Shane in our program.”

Coach Heller on Shimp:
“Kyle was one of the top left-handed pitchers in the Midwest before his elbow injury. We are excited about his potential and love his make-up. We believe he will be 100 percent by fall practice and look forward to seeing him develop. Kyle is also a great student, and we’re elated he has chosen to be a Hawkeye.”

Iowa begins the 2015 season Feb. 13-15 at the Snowbird Classic in Port Charlotte, Florida.