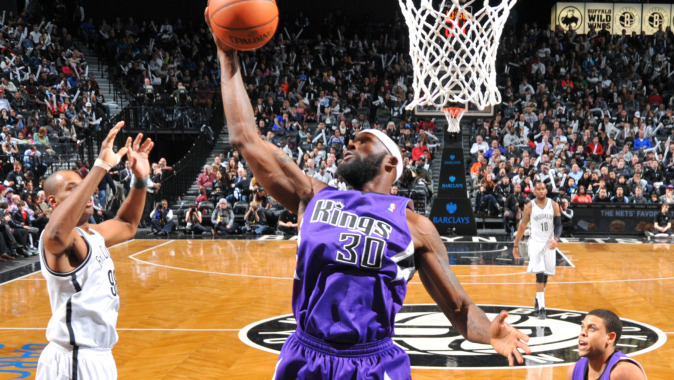 IOWA CITY, Iowa — Reggie Evans left the University of Iowa as one of its most productive players in 2002 and has parlayed his skillset into a 13-year career in the National Basketball Association.

In two years with the Hawkeyes, Evans was a two-time All-Big Ten performer, averaging a double-double each season and reached 1,000 career points. Evans went undrafted in the 2002 NBA Draft, but the Seattle SuperSonics signed the Pensacola, Florida, native as a free agent.

Evans says he knew he would be in the NBA for a long time, but was unsure as to how long.

“I see at a lot of guys who were first-round picks my rookie year that are no longer in the NBA,” said Evans. “I’ve come a long way; it has been hard work. No matter how many years I play in the league, you always want to keep that chip on your shoulder — you want to maintain that edge and stay ahead of the game.”

One of Evans’ favorite NBA moments came when he with the SuperSonics.

“One of my favorite memories is when I played against Michael Jordan for the first time,” Evans said. “He and I took turns scoring the ball the first 10 points or so. That is something I will never forget.”

Evans is known for his rebounding prowess, accumulating nearly 2,000 offensive rebounds in the NBA. Despite missing several games due to injury, he ranks 14th in NBA history in offensive rebounds. Ten of the 13 players ahead of him are NBA All-Stars.

When it comes to rebounding, Evans keeps it simple.

“Just go get it,” said Evans. “I don’t have a certain technique or secret other than a great feel for the game. I like to utilize my quickness and strength, and I make it work. It also depends on who you’re playing and who you’re matched up against.”

This season, Evans is averaging 5.8 rebounds and 2.9 points per game for Sacramento. One of Evans’ assistant coaches is former Hawkeye forward Ryan Bowen, who also serves as assistant director of player development.

“It feels good to have Ryan on the staff; he works me out before our games,” said Evans. “It’s great that we are on the same team.”

Evans still feels he can play at a high level and hopes to play four more years. Evans, who has four children, said he would love for his son to play basketball at Iowa if that’s the path he chooses.

“I got so much genuine love from the Hawkeye fans when I was there. Those were the best years of my life,” Evans said. “It’s something I will always cherish. If my child liked basketball and was ever in the position to play Division I basketball, my heart will want him to go Iowa.