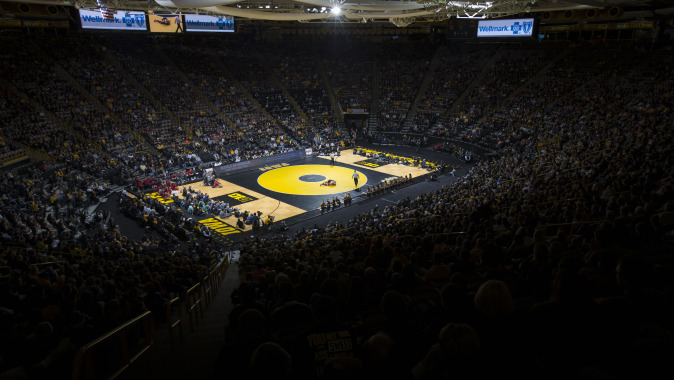 IOWA CITY, Iowa — The Big Ten Network has announced that the top-ranked University of Iowa wrestling team will make seven appearances on BTN this season, including a pair of dates hosting the Cliff Keen National Duals.

BTN will televise the semifinal and final rounds of the Cliff Keen National Duals, hosted by the University of Iowa on Feb. 21-22. The tournament expanded from a two-day event to a three-day event with the addition of television. Iowa hosts Virginia on Feb. 15 in the opening round of 16. Eight teams advance to the quarterfinals Feb. 21 at Carver-Hawkeye Arena. The semifinals will air Saturday on BTN at 3 p.m. (CT). The finals will be televised Sunday at 11:30 a.m. (CT).

BTN will also stream a record 51 wrestling events on BTN Plus. A large number of those streamed events will also be televised on delay as part of BTN’s Student U initiative. Iowa’s home duals against Northwestern and Michigan will be available on BTN Plus.

Iowa’s home dual against Illinois will be televised statewide on Mediacom Connections (MC22).

Details regarding ESPN’s coverage of the NCAA Championships will be announced at a later date.