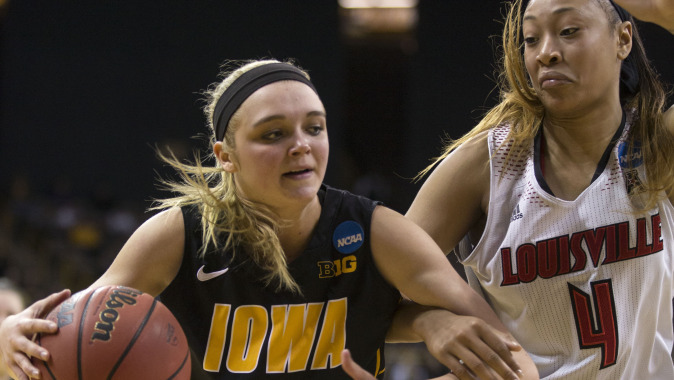 THE SETTING:
The 19th-ranked University of Iowa women’s basketball team (6-1) travels to Louisville to face the seventh-ranked Cardinals (7-0) on Thursday at 6 p.m. (CT) at the KFC Yum! Center in the ACC/Big Ten Challenge.

WATCH THE ACTION:
Thursday’s top-25 matchup can be seen on ESPN3.

AUDIO COVERAGE:
Brent Balbinot and Shelley Till will call the game for the Hawkeye Radio Network. Hawkeye fans can listen to the contest on AM-800 KXIC in Iowa City, AM-600 WMT in Cedar Rapids, AM-1040 WHO in Des Moines (and other Hawkeye Radio Network stations), or on the Hawkeye All-Access page of hawkeyesports.com. Balbinot is in his 11th season as Iowa’s play-by-play voice, while Till is in her 10th providing analysis.

SCOUTING LOUISVILLE:
? Louisville begins a new era as a first-year member of the Atlantic Coast Conference.
? The Cardinals are 7-0 this season and 5-0 at home.
? Louisville is coached by Jeff Walz. Walz enters his eighth year at the helm of the program in 2014-15. In his first seven seasons, he has guided the Cardinals to two Final Four appearances, National Runner-up finishes in 2009 and 2013, and five Sweet 16 appearances. Louisville advanced to the Elite Eight last year before falling to Maryland.
? The Cardinals returned two starters and eight letterwinners from last year’s team that finished 33-5 overall and 17-1 at home.

ALL-TIME SERIES / LAST MEETING:
? This will mark the second meeting between the Hawkeyes and Cardinals, and the second in as many years. Fourth-ranked Louisville defeated Iowa in the Second Round of the NCAA Tournament on March 25 in Iowa City, 83-53.

IOWA VS. THE ACC:
? Iowa is 2-5 in the ACC/Big Ten Challenge after defeating another first-year ACC member, Syracuse, last year. The Hawkeyes defeated the 22nd-ranked Orange, 97-91, inside Carver-Hawkeye Arena on Dec. 5.
? Iowa is 14-8 all-time against ACC opponents, including a 2-0 record last season. The Hawkeyes defeated Boston College on Nov. 29, 2013, in the Cancun Challenge (78-68), before downing the Orange six days later in last year’s Challenge.

HAWKEYES 22/19 IN RANKINGS:
Iowa is No. 22 in this week’s Associated Press Top-25 poll and No. 19 in the USA Today Preseason Coaches poll.

She has also been named a 2014-15 “Wade Watch” list candidate for the prestigious award (The Wade Trophy), the Women’s Basketball Coaches Association (WBCA) announced.

Iowa is leading the Big Ten in scoring offense (94.8).

SEASON IN REVIEW:
The University of Iowa women’s basketball team finished the 2013-14 campaign with a 27-9 overall record, including an 11-5 mark in Big Ten play. Iowa finished tied for fourth in the league with Purdue.

The Hawkeyes were an at-large selection for the NCAA Tournament, earning a No. 6 seed and hosting the First and Second rounds. Iowa defeated No. 11 seed Marist, 87-65, in the First Round, marking the fourth-largest margin of victory in an NCAA Tournament game in program history. The Hawkeyes fell to No. 3 seed and fourth-ranked Louisville, 83-53, in the Second Round.

UP NEXT:
Iowa hosts Colorado on Sunday at 2 p.m. (CT) on Mediacom Court at Carver-Hawkeye Arena.