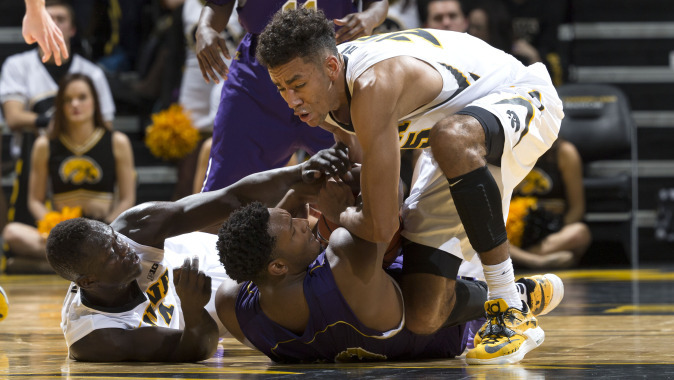 Q. Can you talk about Dom Uhl’s play tonight?
COACH McCAFFERY: I thought he was terrific. I think it starts with him, with his energy level, and he was really active. He was attacking the basket off the dribble, making plays for other people. Made some plays for himself. Got on the offensive glass, and that was important for him. But he looked comfortable out there to me and impacted the game in a big way.

Q. Slowing down the offense, what broke free for you guys?
COACH McCAFFERY: Eventually, maybe after about the first five minutes of the second half, we got a series of stops and we got some transition opportunities, which is what we wanted to do. You know, we got it to 15 with a good spurt at the end of the first half. I thought Clemmons defense on their point guard was really good in that stretch. Ukah at that point makes a big three and big layup, which is obviously instrumental there. But then we give them a bucket to start the second half with three seconds on the shot clock, and seemingly we’re content to trade baskets for a while. And then I think we played with a greater sense of urgency in that next segment. Next thing, you look up, it’s 25, and the game is in hand. And now you just want to make sure that you’re solid after that. Whether during a match up or a straight two three or they are pulling man or whatever, shoot all the time. You’ve got to flash to the high post, you have to screen with a purpose, you have to move with a purpose, you have to drive and kick and overload it. We really moved the ball good. We had great shot opportunities the whole second half.

Q. Big game, five or six times this year, is this almost where you expect that from him?
COACH McCAFFERY: Well, the thing you’ve got to love about him again, the shots weren’t falling, so he gets six offensive rebounds. He recognizes we need him to go back and get it for us. He’s much more aggressive looking for his shot, looking for baskets, running the floor. It’s great to see him being playing a game with that kind of speed and getting a couple dunks. It’s great.

Q. Pressing too much on the three pointers?
COACH McCAFFERY: I don’t know. They are wide open. I only get upset if they start hunting them and start shooting uncontested threes or ill advised. Probably shot a couple earlier in the shot clock than I would have liked but I mean, we were moving the ball. We were finding guys. A couple times we passed the ball not in rhythm, at the ankles or at the shoulders but we didn’t shoot that. Our shot selection has been good.

Q. How do you keep Oglesby’s confidence up?
COACH McCAFFERY: Look how well he’s played. He’s playing great. I mean, his defense, his passing, phenomenal. He knows what we’re doing. He lines up. He’s just not shooting the ball in the hole.

Q. Can you give some early thoughts on playing the Cyclones?
COACH McCAFFERY: They have a real good team. The thing that jumps out at you is that they have so many weapons. Obviously it starts with Niang playing probably the best of his career, which is saying a lot. He’s scoring the ball. He’s making plays off the dribble for his teammates but they have got a lot of three point shooters and they have got athletes. They can hurt you in a variety of different ways. So we’ve got to be ready for them.

Q. Looks like Gabe is playing the best of his career, looks like he’s physically stronger; his game is really coming together. COACH McCAFFERY: He’s really a lot more comfor
table. You know, you can tell. It used to be that as long as he was in the open floor, he was fine. If he got in traffic, he had problems. Now he’s playing in the open floor and he’s playing in traffic, he’s playing defense, he’s protecting. There’s just no panic in his game. He knows exactly what to do, exactly what he wants to do. The other thing is if he does miss a shot or does make a mistake, he keeps playing and it bothers him too much. We really stayed on him about that. Just play through it; you’re a good player. Trust your talent and go make plays, and that’s what he’s doing.

Q. Played quite physical, too.
COACH McCAFFERY: He’s now about 240, too. That helps. He’s got the body and frame for it to sustain effort and to bang that way.

Q. A lot of meaningful games, back to back, no break; do you like where your team is at going into this?
COACH McCAFFERY: Yeah, I’m pleased with the development of some of the guys. Our guys are playing well together, very unselfish team, sharing the ball, rebounding the ball, not turning it over. Do that, you’ve got a chance to win.

Q. White had another ten free throw attempts tonight. The amount he’s gotten to the line, is that sustainable?
COACH McCAFFERY: He’s got an incredible ability to get there in a variety of different ways. We can post him up. We can get it to him in transition. We can get it to him out of the motion game. He just has a knack for getting open and creating angles and getting to the free throw line. The way he shoots it, too, that’s a great thing for us in that if we decide we want to press, we can get into the press and impacts our team in a lot of ways.

Q. What do you expect with the Iowa State rivalry Friday night?
COACH McCAFFERY: I think the game is always played at an incredibly high intensity level, which you would expect. The crowd, whether it’s here or there, is really into it. The players are locked in. Intensity level is very high and that’s what I expect on Friday.

Q. Earlier the Big Ten made it official that they are going to New York in a couple years. What’s that going to be like as far as playing in Madison Square Garden and playing a week earlier than normal?
COACH McCAFFERY: I think it’s great. I’m not so sure it’s not better. But what will happen is we’ll have the opportunity to sort of evaluate all the coaches, all the athletic directors, Commissioner Delaney and kind of see, do we really like this, or are we going to go back to the traditional time period. Because you go right up to Selection Sunday, and if you get shipped west, then you get shipped east, you know, it’s taxing on your team. That’s what happened to Michigan State last year. We always want it on a Monday night, and this came out the following Sunday and we were not playing until the following Friday. Now, some people don’t like that. So some people might say, okay, we are going to save an exhibition or a scrimmage for that ten day period, 12 day period, so we have some competition. I wouldn’t do that but some people might. You have the option to do that. I just think it’s great to go to the Garden, to kind of have the Garden in the rotation with going to D.C. and going to Indianapolis, going to Chicago. I think it says a lot about how far our league has come in terms of expanding our geographic footprint to where we are exposed everywhere in the country, and we’ve got a ton of alumni, all of our institutions back east, get a chance to come and see us. You know, it is the world’s most famous arena.

Q. Jarrod seemed to be a spark in the offense in the first half just talk about his game.
COACH McCAFFERY: He was really looking for his shot. He was aggressive, and that’s what I want him to be. He hit some pull up jumpers early, and then he hit the big three and then it was a terrific move at the end of the half. Even the end of the second half, the one time he went strong to the basket, got fouled. When he’s playing like that, we’re a better team.