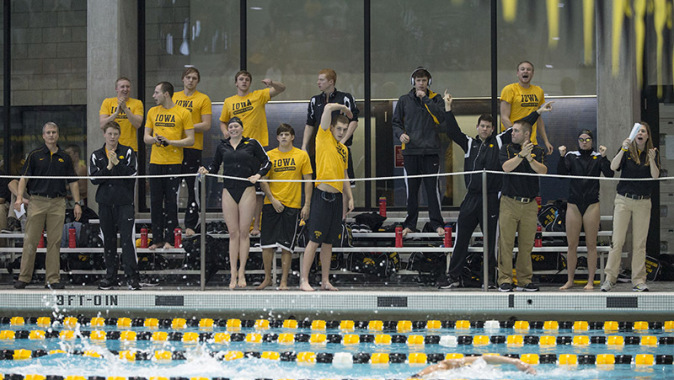 Promotions
Friday’s competition will be a “Black Out” where fans are encouraged to wear black to the CRWC. Free shirts will be given away to the first 50 fans. Admission is free to all ages.

Scouting the Field
Head coach Duane Sorenson enters his 18th season at the helm of the Iowa State program. The Cyclones (5-1, 1-0 Big 12) finished third in the Big 12 a season ago and return a veteran lineup comprised of eight seniors and seven juniors. The Cyclones most recent competition came on Nov. 23, swimming to a runner-up finish at the Kansas Classic with 1,093 points.

Iowa Corn Cy-Hawk Series
The Hawkeyes have won 8-of-10 against the Cyclones, including the last four duals.

Diving To the Postseason
Redshirt seniors Lauren Kelba and Joelle Christy have posted NCAA Zone Diving standards on both the 1 and 3-meter this year. Christy leads the way on both the 1 (304.65) and 3-meter (306.38). Kelba posted a 281.10 on the 1-meter.

Sougstad: B1G Swimmer Of The Week
UI sophomore Emma Sougstad was been named the Big Ten Swimmer of the Week on Nov. 4. Sougstad earned the accolade after posting a pair of NCAA `B’ cut times in the dual against Minnesota on Oct. 31.