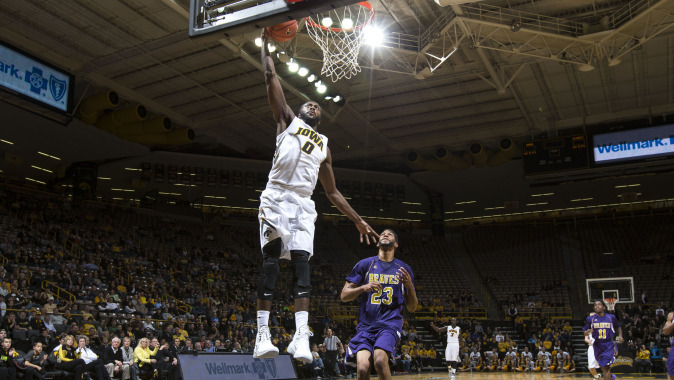 “Both teams come into this game playing fast, and we both intend to continue playing fast,” McCaffery said during a Thursday teleconference.

The Cyclones rank 12th nationally in scoring, averaging 83.6 points. Iowa counters with 72 points per game, but its scoring defense is 16th-best in the country, surrendering 54.9 points.

The Hawkeyes have held their last four opponents under 50 points.

Iowa State is off to a 6-1 start, which includes a three-game winning streak since falling 72-63 to Maryland in the CBE Hall of Fame Classic in Kansas City on Nov. 24. Friday is the Cyclones’ first true road game of the season.

McCaffery says Iowa State has shown it is a complete team.

“When you look at this team, it isn’t only one guy,” said McCaffery. “It’s multiple weapons. They have snipers, offensive rebounders, guys who can go off the dribble, and off isolation. They’re playing fast, moving the ball and setting up shots for each other.”

All five Cyclone starters average in double figures with senior forward Georges Niang pacing the team at 18 points per game. Guard Bryce Dejean-Jones averages 17.1 points and 6.9 rebounds and is shooting 56.8 percent from the floor.

“I’ve been watching (Niang) for a long time, and I have never seen him have a bad game,” said McCaffery. “You’re seeing a guy that is confident in himself and the system. They run everything through him.”

McCaffery says Iowa’s length on the frontline with Aaron White, Jarrod Uthoff, Adam Woodbury, and Gabriel Olaseni could give the Hawkeyes advantage, but it could also create problems.

“We have length,” he said. …”(Iowa State) has speed and quickness. They are shooting better, so there are a lot of other factors involved.”

McCaffery believes Olaseni, Iowa’s reserve center, should be getting for more playing time. Olaseni is averaging 10.8 points and 6.6 rebounds over his last five games. He posted his second double-double (12 points, 10 rebounds) in Iowa’s victory over Alcorn State on Dec. 9.

“If you look at how he has been playing and the numbers and consistency he has been playing with, he deserves to play more,” said McCaffery. “He’s playing at a high intensity level, so we have to be careful not to play him too many minutes. He’s comfortable now, which is good to see.”

Friday’s game will tip at 7:06 p.m. (CT), and it will be televised on BTN with Kevin Kugler and Shon Morris on the call.

Iowa has won four of the last five games in Iowa City in the series, but the Cyclones have won 4-of-5 in the series overall.