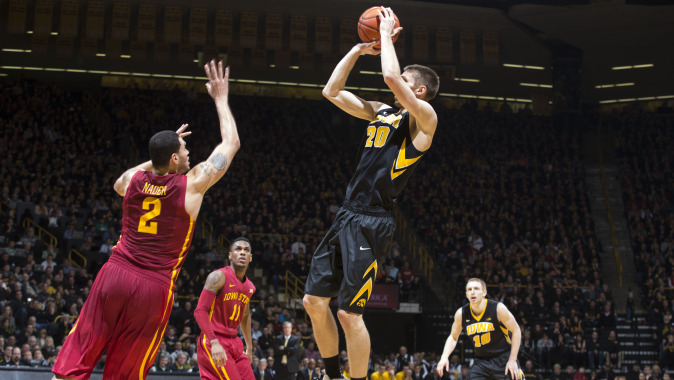 Q. Talk about that first half, the lingering start?
COACH McCAFFERY: I thought that was a big play in the game. I think you’re right. We had a chance to tie it up, go up one, we’re down five. Thomas makes a big shot, got to give credit there. At the start of the second half, a couple stops, Clemmons gets it to the rim. They hit a three. Just kind of snow balled a little bit from there. Then we got tentative a little bit, I thought, offensively. We had a couple guys open on back picks, got the deflection, the run out. Took a couple timeouts, I think, back to back pretty quickly to try to settle everybody down.

Q. Did it feel like that Texas game again where you were scoring and the defense, they were scoring it well?
COACH McCAFFERY: Yeah, but our offense really struggled there. It was, yeah, they were scoring, but they got a lot of run outs because they turned it over. We had a couple of, I wouldn’t say unforced turnovers, but they had their hands in the passing lane and coughed it up. Then got out on the break and finished. They’ll shoot the three in transition as well. You give the team 12 threes and you have a tough time beating them.

Q. You only turn it over twice in the first half, and then you turn it over five times in six possessions.
COACH McCAFFERY: Yeah, that was it. You know, in the turnover, it was Gabe, it was Whitey. Whitey is usually pretty good. Like I said, I’m standing right behind him when he had the one. Mike’s wide open on the back pick, and he’s trying to throw it to him, but he stared him down and kid made a good play.

Q. What is the mood in the locker room? What did you say to them?
COACH McCAFFERY: What I would do in a situation like this is hold them accountable, okay? It’s not all screaming and yelling. It’s okay. We didn’t execute here. We didn’t defend there. We weren’t locked into the game plan here, and we’ve got to manage the game a little better there. Now I’m going to go after some guys individually who were involved in those situations to try to get them to understand, and I think Rick’s right. It’s a little like the Texas game in a sense that once the wheels started coming off, defensively we broke down, offensively we broke down. Maybe a little more offensively than defensively this game, but we had nine straight possessions against Texas, too, where we didn’t score. I don’t know what it was here. But start of the second half, we didn’t have too many buckets for a while, and it makes it hard. Because the lead got to double figures pretty quickly.

Q. You’ve seen outside shots fall before, but right now they’re in a slump and it really cost you tonight. What is the confidence level right now?
COACH McCAFFERY: You know, it’s good to see Pete get going. Josh hit a couple. The game wasn’t in the balance any more, but at least he hit a couple. Jarrod said to me, Coach, they all feel good. He was sure on everything, it seemed to me so that was tough because we need him. He was kind of aggressive offensively I thought in the first half, which we want him to be, but we need him to score. We had a couple of chances where we could have maybe gone up because we were down. We were down eight, and we caught it. We tied it. We were up two, down two, up three, down three, that kind of thing. Could have given us maybe a lead at that point.

Q. How do you, when a game changes so fast like those first six minutes of the second half, you’re calling timeouts?
COACH McCAFFERY: Well, there’s only a couple things. You’ve got to start pushing different buttons. You make a couple substitutions. Maybe get energy. Go big, go small. Press, don’t press. Trap, don’t trap. Try to execute. We were trying to go inside and we missed a couple of opportunities. We turned it over a couple of times, like I said, trying to feed the post. Then we got a little tentative feeding the post, and we’ve got to throw the ball inside. Even if we don’t shoot, it creates a double team. It creates everybody coming in. You can play in and out. We were just a little bit too perimeter oriented in that stretch.

Q. It looked like Woodbury had some chances in the paint. Either maybe too aggressive or I don’t know, what was it?
COACH McCAFFERY: The one time he fumbled the ball and then he kind of rushed it in the first half. That was a big play. We got the ball right to the front of the rim. I forget what the score was, but I think it was a one possession game at the time. Yeah, he rushed it a little bit. He’s having more success with his face up jumper lately than he is with his back to the basket moves. But I thought certainly he did a great job on Niang in the first half defensively, so I’m pleased with that.

Q. I know you’re going into finals week and you don’t have a game for a while. But how do you try to deal with this, get this taste out of your mouth and try to move this team forward?
COACH McCAFFERY: I’ve been here before. You have a great win; you have a tough loss. It’s no different. You go back to work. You break the film down. You hold them accountable. You don’t kill them. You’re reasonable about it. You know, you’ve got to encourage them. You’ve got to get them believing again because they clearly had some doubt tonight. We won’t do much tomorrow. We’re actually off the next two days because we have a bunch of time and we have finals coming up. Finals are very important, so we’ll encourage them to focus there. We’ll get some workouts in. We’ll watch some tape with the guys and slowly we’ll bring them back.

Q. Pete’s been a guy that he had a good game tonight. He’s been coming along strong for you. He is growing. He seems to be growing?
COACH McCAFFERY: He should grow. He’s a good player. He’s an active offensive player. He’s a threat offensively. He can make the three. He can make the pull up jumper. He attacks his threes and makes his free throws. Defensively he’s way better than he used to be. He’s battling defensively. The other thing was his stamina was better tonight, so I was pleased with that. So you can leave him out there for longer periods of time. You don’t have to yank him because he got tired, not because you wanted to.