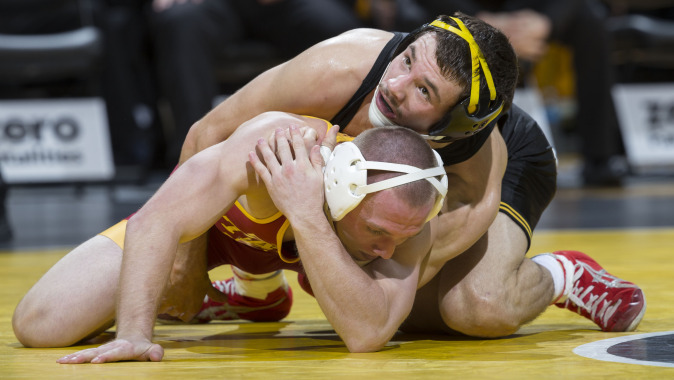 IOWA CITY, Iowa — It’s all bells and whistles this time of year when things are going well, and right now things could not be going much better for Iowa sophomore Thomas Gilman.

Iowa’s 125-pounder is 10-0, ranked No. 3 in the country by Amateur Wrestling News, and preparing for a tournament that last year catapulted him onto the national scene.

The Midlands Championships begin 10 days from today in Evanston, Illinois, and the defending tournament champion is using every day to prepare for an encore performance.

“Last year I had a mission, and I accomplished it,” he said. “I didn’t have the (Iowa) spot and I knew that by winning Midlands and getting a chance to wrestle Delgado, (Dylan) Peters, and Clark would give me a chance to get that spot back.

“I didn’t get a head-to-head with Clark, but I wrestled All-Americans, guys that were ranked, and the returning national champ. I beat those guys, won Midlands, and it gave me the spot for a brief moment. I had a mission going in, and I stayed focused.”

With Clark competing at 133 pounds this year, there is no doubt that Gilman is Iowa’s favorite at 125. Unfortunately, that offers few guarantees against a field that includes three of the nation’s top five wrestlers — Illinois’ Delgado (No. 1), Gilman, and Virginia Tech’s Joey Dance (No. 5).

“It’s another big weight class,” said UI head coach Tom Brands. “There is some depth in the bracket and you have to be ready to go.”

“I have to be more focused (this year). I have nothing to lose, but everything to lose,” Gilman said. “The mission is the same –score a lot of points, wrestle hard, and win the tournament.”

Gilman has won 20 of his last 21 matches. His last loss was almost 11 months ago, when he was pinned by Minnesota’s Sam Brancale on Jan. 25. He has since won 11 straight — four by fall, three by major decision, and two by technical fall — but those wins are lacking the punch that Midlands provides.

“I’m excited because I haven’t had that competition yet,” said Gilman. “I’m looking forward to wrestling guys that are showing they’re some of the better guys in the nation through their results and what they say. I want to go out there and show I’m the best guy in the weight class, I’m the best guy in the country, and solidify what I say and what I think.”

The Midlands pre-seeds are expected to be released early next week. Competition begins Monday, Dec. 29 at 9 a.m. (CT). The finals are televised by BTN on Tuesday at 7 p.m.