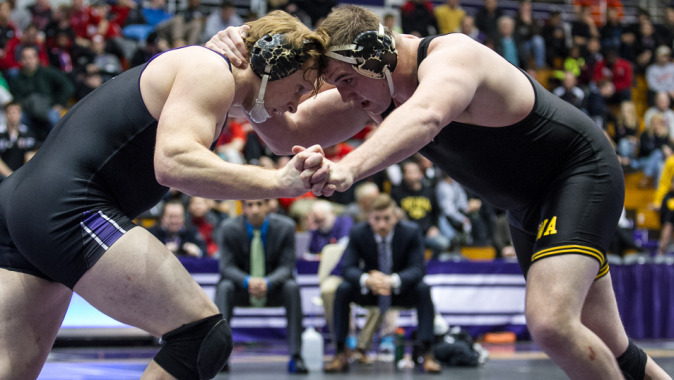 IOWA CITY, Iowa — University of Iowa senior Bobby Telford was named co-Big Ten Wrestler of the Week by the conference office Wednesday. The weekly honor is the first of his career and the first for Iowa this season. Telford shares the weekly honor with Indiana’s Taylor Walsh.

Telford recorded a pair of falls and two wins over top five opponents while winning the 285-pound Midlands title on Tuesday. He defeated Northwestern’s top-ranked Mike McMullan, 4-2, with a takedown in the closing seconds to cap a 5-0 week and improve to 14-0 this season.

Telford also recorded a 3-1 win in the in the semifinals over No. 5 Connor Medbery of Wisconsin. He opened the tournament with a pin in 2:26, and added another fall in the quarterfinals (2:51). He now has a team-best nine pins, matching his single-season career high set as a freshman in 2011-12.

Telford was one of four Hawkeyes to win an individual title at the 52nd annual Midlands Championships. Fellow All-Americans Cory Clark (133), Mike Evans (174), and Nathan Burak (197) joined him on top of the medal stand. The Hawkeyes won the tournament with a record 189 team points. It was their 24th Midlands team championship.