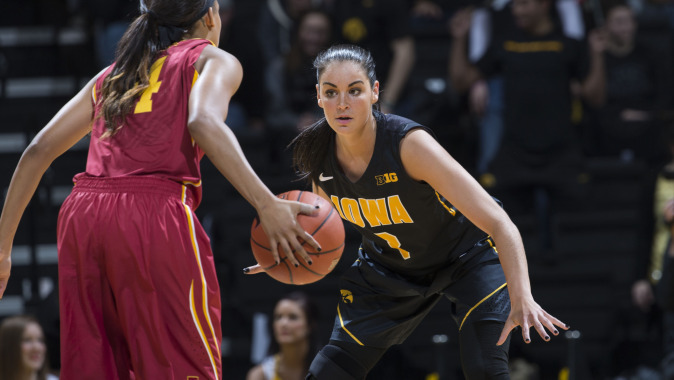 WATCH THE ACTION:
Sunday’s contest will be broadcast live on BTN and BTN2Go. Frank Hanrahan and Stephanie White will call the action.

FOLLOW THE ACTION:
Hawkeye fans can also follow the game via live stats. The link can be accessed on the women’s basketball schedule page of hawkeyesports.com.

QUICK HITS:
? Iowa enters its Big Ten road opener on a four game winning streak.
? Rutgers head coach C. Vivian Stringer coached at Iowa from 1983-95, while Rutgers assistant coach Tia Jackson and director of basketball operations Michelle Edwards both played at Iowa.
? Sunday’s contest features the two winningest coaches in Iowa history: Lisa Bluder (288 wins at Iowa) and C. Vivian Stringer (269 wins at Iowa).
? Iowa won the last meeting against Rutgers, 70-63, in the first round of the 2010 NCAA Tournament.
? Iowa’s NCAA RPI is 14. The Hawkeyes are second among Big Ten teams (Nebraska is No. 5).
? Iowa is ranked No. 20 in the Associated Press Top-25 poll and No. 20 in the USA Today Coaches poll.
? Iowa ranks second nationally in 3-point field goal percentage (41.8%). Melissa Dixon leads the nation in 3-pointers/game (3.9).
? Dixon made 10 3-pointers (10-of-14) in Iowa’s 100-98 win at Drake on Dec. 21, setting a new school record. The previous school record was seven, accomplished five times in program history, twice by Dixon. The NCAA and Big Ten record for 3-pointers in a single game is 12. She has made 15 total 3-pointers over the last two games after making five in Iowa’s win over Penn State on Dec. 28.
? Dixon is second in 3-pointers on Iowa’s all-time list (257). Lindsey Meder holds the school record (261) and ranks sixth in Big Ten history.
? Iowa set the school record for scoring offense (78.2) last season, leading the league in scoring while notching the second-most points in a season in Big Ten history (2,814). The Hawkeyes rank 12th nationally this season (81.8).
? Ally Disterhoft has scored in double figures in 26 of her 29 career starts. Iowa is 23-6 when Disterhoft starts.
? Iowa senior Samantha Logic, the NCAA’s active career assists leader (696), ranks seventh in assists in Big Ten history. Nebraska’s Lindsey Moore is sixth with 699 career assists.
? Iowa is the only Big Ten team, and one of only 14 teams in the country, to appear in the last seven NCAA Tournaments. There are 349 Division I teams.
? Iowa was picked to finish third behind Maryland and Michigan State in the Coaches Big Ten preseason rankings.

FAMILIAR FACES:
? The Scarlet Knights are coached by former Iowa coach C. Vivian Stringer. Stringer was Iowa’s head coach from 1983-95, posting a 269-84 overall record and a 169-45 Big Ten mark. Stringer led Iowa to two outright Big Ten titles and Iowa shared the Big Ten title on four occasions under her direction. She led Iowa to nine-straight NCAA Tournament appearances and a Final Four berth in 1993. Stringer is a member of the UI Varsity Club Hall of Fame, the Women’s Basketball Hall of Fame and the Naismith Memorial Basketball Hall of Fame.

? Rutgers director of basketball operations Michelle Edwards is in her 12th season with the Scarlet Knights. Edwards, inducted into the Women’s Basketball Hall of Fame in 2014, is one of the most decorated players in Iowa women’s basketball history. The 5-9 guard, nicknamed “Ice,” amassed a career record of 102-22 from 1984-1988. During her four years, Edwards led the Hawkeyes to three NCAA Tournament appearances and two Big Ten titles. In 1988, she was named the Champion Products National Player of the Year, the highest honor in women’s collegiate basketball. Edwards garnered several other honors that year including being named a Kodak All-American, a Naismith All-American, a USBWA All-American, the Big Ten Player of the Year, and the University of Iowa Athlete of the Year. In her senior season, Edwards also led Iowa to its first ever national No. 1 ranking, along with a record of 29-2 overall and 17-1 in the Big Ten. She paced the Hawkeyes with an average of 20 points per game, 4.8 rebounds per game, 4.5 assists per game, and 2.9 steals per game. The three-time first team All-Big Ten selection is the only Hawkeye to have her jersey retired (No. 30).

? Rutgers assistant coach Tia Jackson is in her fourth year with the Scarlet Knights. A 1995 graduate of the University of Iowa, Jackson helped Iowa to a 27-4 record, a berth in the NCAA Final Four and was named to the NCAA Mideast Regional All-Tournament team as a junior. Jackson was honored as an All-Big Ten selection and a Street & Smith’s Preseason All-American twice.

DIXON SETS 3-POINT RECORD IN WIN AT DRAKE:
? Senior Melissa Dixon made 10 3-pointers (10-of-14) in Iowa’s 100-98 win at Drake on Dec. 21, setting a new school record. The previous school record was seven, accomplished five times in program history, twice by Dixon. The NCAA and Big Ten record for 3-pointers in a single game is 12. She finished with 31 points.
? Dixon was named to the Big Ten Player of the Week Honor Roll.

UP NEXT:
Iowa resumes action on the road at Illinois on Thursday, Jan. 8. Tipoff is set for 7 p.m. (CT).