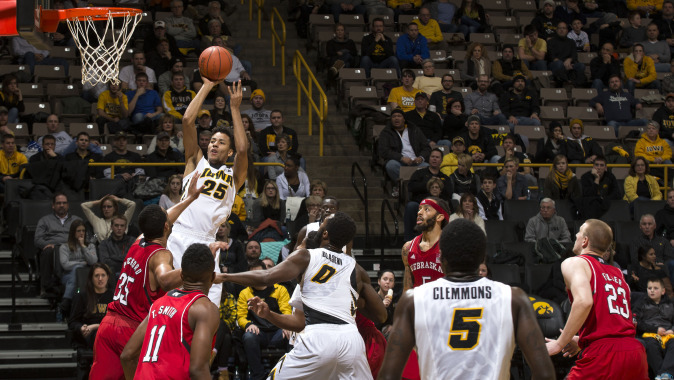 Q. Aaron came out big for you.
COACH McCAFFERY: He wasn’t the only one. He always comes up big for us. Uthoff’s three was huge. Clemmons’ bucket. Clemmons’ three. Obviously Gabe’s free throws. Gabe’s impact at both ends. There were a lot of guys that came up big in this one.

Q. Coach Miles came up with three possessions that made the difference in the end.
COACH McCAFFERY: We were also getting stops. So it’s a combination of both. We weren’t trading baskets. We got a little bit of separation there. Yeah, but I would say that’s accurate. They ended up shooting 37% in the second half. I mean, there was a stretch there, one of my assistants said to me, They’re shooting 64% so far this half, seemingly around the 10 minute mark. We got some stops down the stretch, which was critical.

Q. Talk about Gabe’s effort.
COACH McCAFFERY: He made a concerted effort to go inside, try to get to the free throw line. He’s playing with such confidence offensively, with his free throw. It’s just great to see. I mean, big ‘and one’ when we were struggling offensively. But you could just see he’s playing with great confidence.

Q. Kind of a gut check for your team? They got ahead 51 50. Could have hung in the balance.
COACH McCAFFERY: If you study this team, like we have, like they studied us, they don’t go away. They’re not going anywhere. We got up 5, 6, 7, whatever, they’re going to keep coming. They got a couple great scorers. They play hard. They defend. You got to keep making plays and you got to keep making stops. The one thing that has to happen, you got to play hard and you got to play smart all the time. You can’t say we’re going to do it for a stretch, then be relaxed. I think there was a stretch in the first half where that was a problem. It came easy, then we stopped playing D, then we got two stops, rebound, they hit two threes, now all of a sudden it’s back to even. You got to finish those possessions like you did the ones to get the lead in the first place. That’s how you create the separation that you need. So much of the game plan we were locked into. Obviously we wanted to drive the ball, we wanted to run, throw it inside. 38 free throws. That’s terrific. We wanted to move the ball side to side, share the ball. We did that. That was terrific. But, like I said, your energy level and your concentration have to be constant every possession. Certainly was down the stretch. So I’m proud of the guys there.

Q. Aaron, you said he always comes up big. What has he meant big picture to you here?
COACH McCAFFERY: Well, you got to think back to when he signed with us, when he committed to us. It wasn’t as fashionable at the time. We had some guys that we went after that didn’t give us any love. They weren’t sure. He wanted to play in the Big Ten. We were the only Big Ten school that offered him. The story that I told at the Ohio State game, he came his senior year, we got our ears pinned back that night with Sullinger and those guys. I told him, It’s going to be better when you get here, it’s going to be better because you’re here. Go over there, junior, senior, beat them twice. He’s pretty much been right in the middle of it. He’s been right in the middle of everything we’ve done. He’s had help. But he is mentally on a different wavelength than everybody else. He sees the game differently. He will change defenses. He will change offenses. Literally a coach on the floor. I give him that flexibility because I trust him. He knows I trust him. I think that helps his confidence level as well. I’m just so thrilled that he has enjoyed this experience the way he has. It’s been great for us. But it’s been terrific for him. He’ll be playing for a long time.

Q. (Question regarding Big Ten play.)
COACH McCAFFERY: Every win in this league is so hard, especially this year. You look at every game, there’s just not going to be one that’s easy. Every game is going to be unique, whether it be a grind it game, a more wide open game, more free throws, less free throws, more threes, less threes, unsung heroes. It’s going to be that kind of season. What I try to get our guys to know and understand is we’re a team, where different players on any given night are going to come up big. That’s what happened tonight. Pete wasn’t involved as much. He certainly was at Ohio State. He’s got to stay ready and maybe he is the guy at the next game. Maybe Woody is the guy the next game, okay? That’s what I like about our team. We have various people on any given night that can come up big on either end of the floor.

Q. (No microphone.)
COACH McCAFFERY: That’s a combination of things. We weren’t pounding inside, weren’t giving it up early. Mike was trying to push it early. Great alley oop pass to Whitey the one time. He was really looking to go. Even when he turned it over in the second half, he was looking to attack, get the ball to those guys. I never thought about it. They didn’t have great shot opportunities. Pete was shooting a few more contested than he normally does today. That’s something he’s got to get figured out. But those guys can score and they’ll be okay.

Q. (Question regarding Gabe.)
COACH McCAFFERY: I certainly wish he had another year for us, for me. But for him, he’s going to graduate. He wants to play professionally. I mean, he may have gone ahead and continued his professional career anyway. There’s no guarantee he would have come back because he is so advanced academically. He’s gifted and really put the time in in the summer. He’s very happy with where he is. Selfishly I’d love to have him back. It’s worked out fine for him.

Q. (Question regarding free throw shooting by Gabe.)
COACH McCAFFERY: Well, it’s great to see him doing that. You go back to the Ohio State game, his two free throws in that one stretch, arguably the two biggest points of that game. We were struggling a little bit. They made the run. They foul him, boom, boom. Gives us a little bit of a cushion. He just steps up there and drilled ’em. That’s why he’s in the gym three times a day every summer the whole time he’s been here. You get good at that stuff when you practice like he does.

Q. (Question about Michigan State)
COACH McCAFFERY: They have a swagger, no question about it. They have a defensive style of play that keeps them in games if they’re not shooting the ball well. They’ve got talented players. They played great tonight. Really well. We’ll have to be ready for them. Thank you