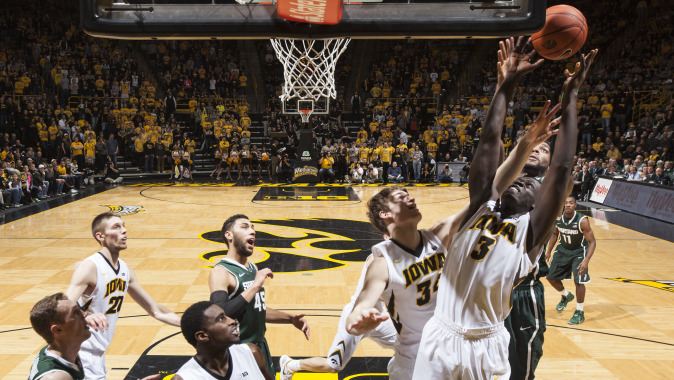 Q. You were doing so well in the first half. Halftime came, what happened?
COACH McCAFFERY: Well, the start of the second half was pretty good. We traded a couple baskets each. We were still up 11. They caught fire, obviously. And I think that clearly affected us. They started hitting three after three. They were swishing ’em. Our defense was not as locked in as it was. Our offense struggled at times obviously. It would have been nice to get a few more offensive rebounds in that stretch where we were struggling to score. But despite all of the stuff they were doing on offense, I felt like we were still right there. It was 6 with a reasonable amount of time left. But we really struggled offensively, and I think it affected everything that we did from that point forward. They got some energy from the fact that they were playing good defense. We weren’t getting seconds. We weren’t scoring certainly as easily as we were in the first half. We had a 27 10 run at one point. We had that long stretch where we weren’t making jumpers, not getting it back. They were moving the ball. The disappointing thing is whenever you play a team, you hope you can do a better job on their good players. They have three elite guys, and that’s who hurt us. That’s disappointing.

Q. In the past there have been a lot of 50/50 balls that went the other way. In the first half they seemed to go your way. You were pretty aggressive. Once they started hitting threes, it seemed to change.
COACH McCAFFERY: That’s going to change the complexion of any game. What you say then is, Should we have done a better job blocking into those two guys, because it was really two guys. Forbes hit one, but two guys hit 11. All right, do we pay closer attention, you know. But the rest of those guys are pretty good, too. They’re driving it. They’re breaking down the defense. They’re creating help recovery situations. You got to decide, Do you stay home and give them a layup? It’s a tough call for some of those guys. So we didn’t guard off the dribble like we would have liked either.

Q. Aaron struggled. How much of the credit goes to Dawson?
COACH McCAFFERY: I certainly think some of it. He didn’t seem to get going early. He didn’t seem to have his usual energy level. If you remember, we took him out early. We never take him out that early. We just wanted him to settle down, relax. I think he was hyped. I think he was really tired. We put him back in, and he was a little better. But he certainly wasn’t himself. You’re right.

Q. What did they do differently to Gabe in the second half?
COACH McCAFFERY: They were more physical. We didn’t do as good a job getting him the ball either. But in the first half, there was more fouls called. I couldn’t tell if there was anything different at that end versus our end. We had a couple opportunities to get the ball to him, we didn’t get it to him. That’s something we got to do a better job of.

Q. (Question about losing the lead)
COACH McCAFFERY: Like I said, it was disappointing they scored early, then we scored, then Whitey hits the three. I’m feeling like, Okay, we’re okay. Would rather take it from 11 to 15 rather than it goes back and it goes back to 11. But, you know, I thought we were locked in. I thought our execution was pretty good. Like I said, team makes their first eight threes, obviously you have to take some responsibility for that. But it’s going to affect your momentum and your mentality at that point, I think.

Q. (Question about MSU guard Travis Trice)
COACH McCAFFERY: You know, he’s a guy that he can break your team down off the dribble or he can come off screens and spot up. They do a pretty good job of getting him the ball. If they’re not, he’ll come get it, he’ll get it himself. There again, that’s what I’m talking about. If he is away from the ball, we have to do a better job of containing dribble penetration so we can stay locked in on him.

Q. There’s a toughness issue that’s been brought up the last few times.
COACH McCAFFERY: No. I do think we got a little shellshocked at one point when they were hitting shots like I said, not only were they hitting them, they were swishing them. They were on fire. So we didn’t get as many chances to get transition opportunities. So we were constantly coming down offensively against a stacked defense, which is harder to score against, of course.

Q. First half execution on offense, there were stretches where it was probably as good as it’s been all year.
COACH McCAFFERY: It was. It was actually even pretty good early when we were behind ’cause our defense at the start of the game wasn’t what it should have been. I would have liked for it to have been better. Took us a while to really get the lead. Then we had a chance to get it to double digits.

Q. A lot of those shots that Trice was making, it was against the zone. In the first half your man seemed to be really effective.
COACH McCAFFERY: We didn’t play a lot of zone. Valentine hit one on the top of the key against the zone. I wasn’t comfortable staying in the zone very much. We didn’t play much zone. When you’re behind, some coaches will do that. I don’t like to do that.

Q. What is your approach with the team now? This is a game where you really had a chance to take a step up, show everyone you were here for the long run.
COACH McCAFFERY: You approach it the exact same way. If we had won the game, we’d be jumping on top of each other, all that stuff, chest bumping. You still got to play Minnesota on the road, who is a really good team. You’ve got to get locked in and get ready for that game. So nothing changes there. We just got to work a little bit harder, a little bit smarter, and be more consistent. I think when it’s all said and done, you know, we’re pretty good, but our consistency has not been what it needs to be. This league is brutal. So we just need to play better longer. We tried to sub guys. You look at the minutes. Played nine guys 10 minutes or more. We try to keep guys rested. The guy who played the most minutes was the most productive, Uthoff. They should be able to play the minutes that are on here.

Q. How frustrating is that as a coach, the consistency thing?
COACH McCAFFERY: It’s the challenge of it. It’s what coaching is. It’s great if you can come out and just play great all the time. Doesn’t work that way. Anytime you’re in a situation like this, you have to break down everything. How do we prepare? How do we practice? How much film do we watch? Did we do too much? Should we do more? Stay positive with them, while holding them accountable. I mean, they feel terrible. I feel terrible. But we’re going to keep fighting. Keep coaching them up. They’re great kids. We’ve proven we can be really good. We lost to a really good team. We have to be respectful of who beat us and do better the next time we take the floor, and that’s in practice, not Tuesday. We’ve got to be better the next time we take the floor. I think more is one. I think we’ve got to collectively get together. What can I do to help the guy next to me? What can he do to help the guy next to him? At some point you’ve got to believe in yourself, you’ve got to believe in the guys on both sides of you. That’s what we’ve got to do.

Q. When you play Gabe, you get a lot of lift offensively. Adam brings toughness on the other end of the court. How much did you give up?
COACH McCAFFERY: That’s one of the things, you look back and say I should have played Woody more. Gabe was rolling. He was active. He was really good on ball screens. He was moving his feet. He was an offensive threat. Then, of course, our offense is struggling, so you leave Uthoff, Olaseni, Whitey, you leave your offensive guys out there. There was one time when I went and got Pete because he was exhausted.