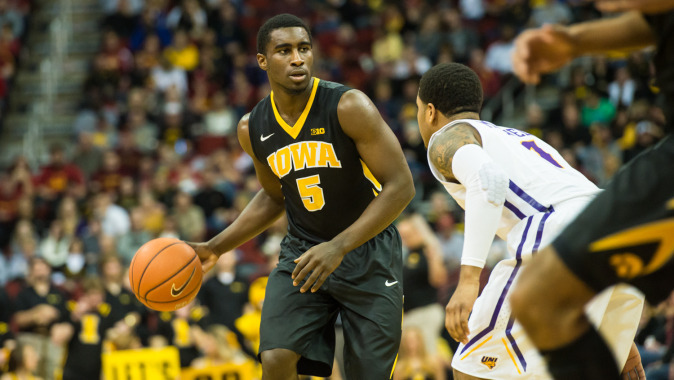 IOWA CITY, Iowa — The University of Iowa men’s basketball team can clear a mental hurdle tonight with Michigan State coming to Carver-Hawkeye Arena for a primetime showdown on ESPN.

The Hawkeyes have been close — playing three of the last four meetings against the Spartans to within a single possession — but haven’t prevailed. Iowa has lost eight-straight in the series and 13-of-14 overall with the lone win coming in UI head coach Fran McCaffery‘s first season — a 72-52 Iowa win on Feb. 2, 2011, in Iowa City.

“It would be a big step,” said junior Anthony Clemmons, a Michigan native. “We try to take it one game at a time and play our best and be consistent after every game. Michigan State is a very good program, so that would be a great win for our program.”

This time around, Iowa believes it has the mental toughness to win a grind-it-out, defensive slugfest. The Hawkeyes learned from their near misses last season and have taken a step forward, already winning in two tough road environments at North Carolina and Ohio State this season.

“Based on the experience (we gained last year), we’re a tougher team,” said junior Jarrod Uthoff, the reigning Big Ten Player of the Week. “Last year we had a couple of tough losses, games we should have won. We learned from that and are better this year. We have a tougher mindset when the game is on the line.”

All indications point to tonight’s game being another nail biter. The two teams are near mirror images of one another, ranking second and third in the Big Ten in scoring defense, seventh and ninth in scoring, and both are in the top-four in field goal and 3-point field goal defense.

“We know them up and down,” said Clemmons, who will square off against high school teammates Denzel Valentine and Bryn Forbes. “The game will come down to who is mentally tougher. I don’t think it’s the physical part, it’s more of who can make the plays down the stretch.”

It’s the Spartans who have the reputation of making the little plays, the winning plays.

“That presents the challenge of being mentally locked in for 40 minutes, 45 minutes… whatever it takes. They’re good and they have a great confidence about them. We’ll be ready.”

White is looking forward to his last go-round against Michigan State and head coach Tom Izzo (tonight is the only meeting of the season, barring a matchup in the Big Ten Tournament).

“It’s always fun to play against them,” said White. “It’s going to be a great atmosphere, and it’s on a big-time stage on ESPN. Everyone is going to have intensity and is going to be excited to play.”

Tonight’s game tips off at 6:05 p.m. (CT) and the contest is approaching sellout status as approximately 400 tickets remain through the Iowa Ticket Office.

Dan Shulman, Jay Bilas, and Seth Greenberg will be on the call on ESPN.