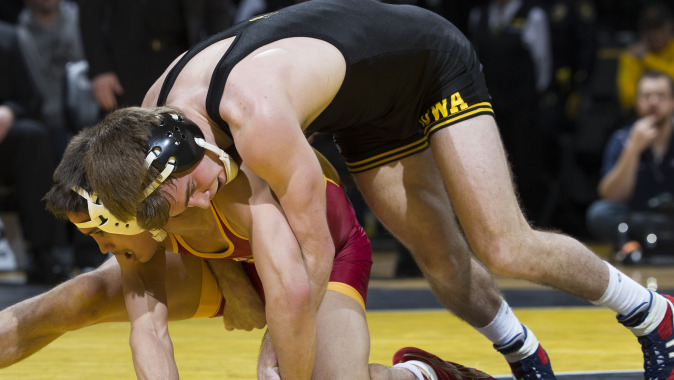 TELFORD EARNS NATIONAL HONOR, TOP SPOT
Senior Bobby Telford was named USA Wrestling’s Athlete of the Week after winning four matches against top 10 opponents in a span of six days. The sport’s governing body announced the award Monday. Telford won the Midlands 285-pound title on Dec. 30, knocking off No. 5 Connor Medbery (Wisconsin) in the semifinals and defeating then-top ranked Mike McMullan (Northwestern), 4-2, in the finals. He earned a 6-2 win over No. 8 Billy Smith on Jan. 2 at Rutgers, and completed Iowa’s come-from-behind dual win at Ohio State on Jan. 4 with a 4-0 shutout against No. 10 Nick Tavanello. Telford climbed to No. 1 in the Jan. 6 Intermat rankings. He wrestles his fifth consecutive top 10 opponent on Sunday when he faces No. 4 Austin Mardsen of Oklahoma State. Telford is 1-0 all-time against Marsdsen, a 2-1 decision last year in Iowa City.

UNDEFEATED ALL-AMERICANS
Three of Iowa’s four returning All-Americans — Mike Evans (174), Nathan Burak (197), and Bobby Telford (285) — are a combined 42-0 this season with 22 pins. Evans, and Telford are all 16-0. Telford has nine pins, one major decision, and one win via medial forfeit. Evans has nine wins by bonus points. Burak is 10-0 with two pins, one major decision, and one technical fall. He has claimed two tournament titles wrestling unattached at the Luther Open and Midlands Championships. He wrestled attached for the first time Jan. 4 at Ohio State and earned a 2-1 win over No. 7 Kyle Snyder. Clark, Iowa’s other returning All-American, was 14-0 before losing for the first time to Ohio State’s ninth-ranked Johnny DiJulius, 7-5. Clark is 14-1 overall with seven falls, one technical fall, and one major decision. All four returning All-Americans won Midlands individual titles on Dec. 30.

HAWKEYES IN THE RANKINGS
Iowa has 10 wrestlers ranked in the top 10 of the latest Intermat rankings (Jan. 6), more than any other school. Five of Iowa’s wrestlers are ranked in the top 5, including Thomas Gilman (5), Cory Clark (5), Brandon Sorensen (5), Mike Evans (2), and Bobby Telford (1). Three more Hawkeyes are projected in the top eight, including Josh Dziewa (8), Nick Moore Sammy Brooks (7), and Nathan Burak (6). Nick Moore is ranked No. 9 at 165, and Michael Kelly is ranked No. 16 at 157.

EVANS EXTENDS STREAK
Senior Mike Evans blanked Rutgers’ Phil Bukuckas, 5-0, and defeated Ohio State’s 12th-ranked Mark Martin, 5-2, to improve to 16-0. The 16 consecutive wins is a career-long, and five more than his previous streak of 11 set in 2013-14. Evans has 93 career wins, more than any other active Hawkeye, and his 60 career dual starts are most on the team. He is 50-10 all-time in duals.

SORENSEN BREAKS INTO TOP 5
Redshirt freshman Brandon Sorensen improved to 21-2 following a 9-7 win over fifth-ranked Hunter Stieber on Jan. 4 at Ohio State. Sorensen is now ranked No. 5 by Intermat. His 21 wins lead the team. He also has a team-high six major decisions to go along with five falls and two technical falls.

A LITTLE EXTRA FROM BROOKS
Sophomore Sammy Brooks has 16 wins this season, and 12 have come with bonus points. Brooks is 16-1 overall with six pins, three technical falls, and three major decisions. He also has one win via medical forfeit. He has four wins over ranked opponents this season, and placed third at the Midlands Championships. His six falls rank second on the team behind Telford (9) and Clark (7).

KELLY GETS NO. 50, ENTERS RANKINGS
Senior Michael Kelly defeated 13th-ranked Anthony Perrotti on Jan. 2 to earn his 50th career win. The fifth-year senior is 50-30 in his career, including a 15-2 mark with four falls this season at 157 pounds. His 50 career wins are the fifth most among active Hawkeyes, and his 38 career dual starts is fourth most among active Hawkeyes. Kelly split a pair of matches last week against ranked opponents. He defeated Perrotti, but fell to No. 5 Josh Demas of Ohio State, 5-2. Despite the loss, Kelly entered the rankings for the first time this season. He is ranked No. 16 by Intermat.

HAWKEYES ON TV
Iowa’s regular season duals Minnesota, and Penn State will air live on BTN. The Hawkeyes wrestle at Minnesota on Jan. 30 at 6 p.m., and at Penn State on Feb. 8 at 12 p.m. BTN will televise the semifinal and final rounds of the Cliff Keen National Duals, hosted by the University of Iowa on Feb. 21-22. The semifinals will air Saturday on BTN at 3 p.m. The finals will be televised Sunday at 11:30 a.m. BTN is televised the final round of the Midlands Championships, and will televise the final round of the Big Ten Championships on March 8, 2015, at 2 p.m. The 2015 conference tournament is hosted by Ohio State.