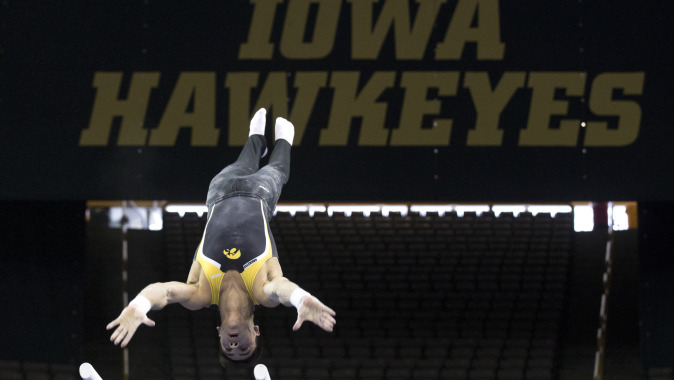 THIS WEEK:
The University of Iowa men’s gymnastics team kicks off the 2015 regular season at the Windy City Invitational on Jan. 17, in Chicago Illinois. The event begins at 7:30 p.m. (CT).

LAST TIME OUT:
The men’s gymnastics team hosted the annual Black and Gold Intrasquad on December 6. The Black team defeated the Gold team in the friendly competition, 253.550 to 251.400 held at the UI FieldHouse.

–Doug Sullivan broke current Hawkeye assistant coach Ben Ketelsen‘s pommel horse record (15.250) on Feb 15.
-At the Arnold Classic in March, Iowa set a school record on Rings (75.350).
-At Nebraska on March 15, the Hawkeyes set a new school record for overall team score (437.250). This was the second time in 2014 that Iowa had broken that record, the first time coming against Minnesota and Nebraska in Iowa City.
-At the same meet, Iowa set a team record for overall vault score (74.150) –Matt Loochtan broke a floor record (15.600) against Minnesota on March 8.

PRACTICE FACILITY RENOVATION:
The men’s and women’s gymnastics teams are amidst a practice facility renovation. The renovation will provide the gymnasts with more space to practice, include two new foam pits, and another pommel horse. The project will help accelerate the gymnasts’ skills and improve safety at the facility. The facility — located in the UI Field House — is scheduled to be completed in February 2015.

CANADIAN NATIONAL CHAMPION:
Over the summer sophomore Corey Paterson participated in the Canadian National Championships and won the high bar event with a score of 13.850. He also finished fifth in the all-around competition with a 79.800. Paterson is expected to have an increased role in 2015 with the departure of seniors Angelo Bronzino and Matt McGrath.

HEAD COACH JD Reive:
Entering his fifth year as head coach of the Hawkeyes, Reive has high expectations for his team. For the first time in his career Reive has a team comprised of gymnasts he personally recruited. He is looking to take the program another step forward. Reive led the Hawkeyes to a fifth place finish at the NCAA Championships in 2013, their best finish in a decade. 2014 was a down year for the Hawkeyes, the gymnasts set seven school records and seven went on to compete individually at the NCAA Championships. The team finished seventh in the Big Ten and missed the team finals at NCAA Championships in April. Reive graduated from Nebraska in 2000 and was an assistant at Stanford from 2003-10 where he helped the team grab four top three finishes.

NEW ASSISTANT COACH:
Minyoung Kwon was named Iowa’s newest assistant coach this summer. Kwon brings over 30 years of gymnastics experience which began when he was on the Korean National team in the 1990s. Kwon last coached at Westside Gymnastics Club in Nashville, Tennesee. He has experience as a coach, judge, and athlete. Kwon graduated from the Korea National Sport University in 1996 and went on to earn his master’s degree in Physical Education in 1998.

SEASON TICKETS:
Fans interested in attending 2015 home meets at Carver-Hawkeye Arena should visit hawkeyesports.com or contact the UI Athletics Ticket Office at 1-800 IA-HAWKS. Season tickets are currently on sale for $12 for adults

UP NEXT:
The Iowa men’s gymnastics team welcomes UIC for their first home meet of the season on Jan. 24 at Carver-Hawkeye Arena. The meet begins at 7 p.m. (CT).