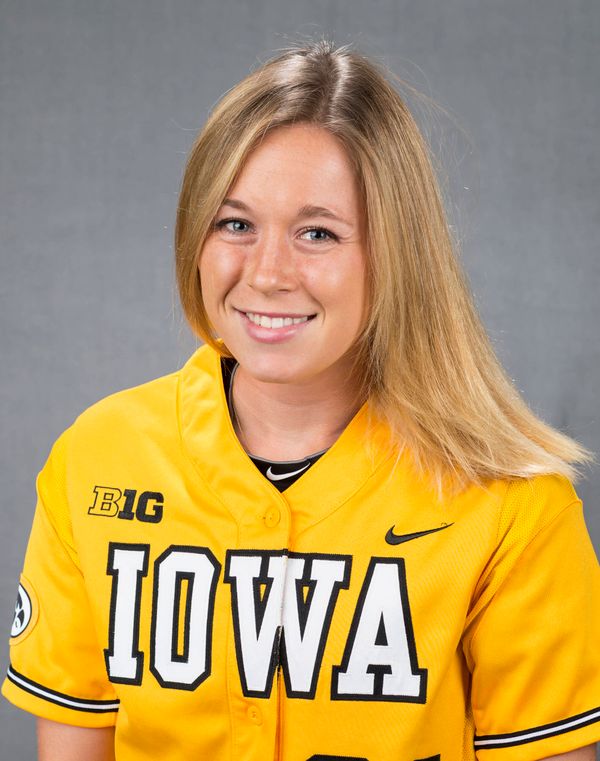 2015 as a Junior… Played in 44 games with 29 starts as Iowa’s designated player… appeared as a pinch hitter 15 times… recorded career highs in RBIs (5), hits (3) and doubles (2) in Iowa’s 12-4 win over Northern Iowa… was a perfect 3-for-3 at the plate at Oklahoma State to match her career high in hits… drove in three runs in the game and hit her fourth double of the season… drew a walk as a pinch runner and scored a run against Maryland on March 20… went 1-for-2 with one RBI against Maryland on March 21… was a perfect 2-for-2 at the plate against Maryland on March 22, posting the lone hits for the Hawkeyes… went 1-for-3 with a walk, run scored, and an RBI against Nebraska on March 25…. went 1-for-3 with 2 RBIs in Iowa’s 15-7 run-rule victory over Illinois on April 3… registered a hit and score a run against Illinois on April 4… recorded a hit and plated a run against Illinois on April 5… was 1-for-3 at the plate with a walk and an RBI at Wisconsin on April 10… recorded her second career sacrifice fly in Iowa’s 3-2 10 inning win over Wisconsin on April 12… registered a walk against Minnesota on April 25. .. registered a pinch hit single in Iowa’s 5-3 Big Ten Tournament opening round win over Rutgers on May 7… drew a walk in a pinch hitting appearance in Iowa’s Big Ten Tournament semifinal game against Nebraska on May 9… letterwinner.

High School… Three-time all-district selection, earning second team honors as a sophomore, first team as a junior and unanimous first team as a senior… named to Texas Sports Writers Association 2012 All-State Team after batting .396 with 11 home runs and 42 RBIs despite missing last two playoff series with an injury… led her high school team to class 4A Texas State Championship in 2012… named first team All-Comal Country in 2012… first team All-Comal County and a San Antonio Express News All-Area selection in 2011… batted .487 with six home runs, 25 RBIs and 11 steals as a sophomore… hit .530 with eight home runs, 35 RBIs and 13 steals as a junior… also hit .425 with three long balls, 30 RBIs and 14 steals as a freshman… led team to a 5A state and district title in 2009 and to the district and bi-district championships in 2010 and 2011… the 2011 squad went undefeated… played ASA softball for the Texas Bombers Gold squad, finishing 17th at the Premier in 2011, 17th at the ASA Gold Nationals in 2010 and second at the 2010 Louisville Slugger Independence Day Tournament… four-time academic all-district honoree.