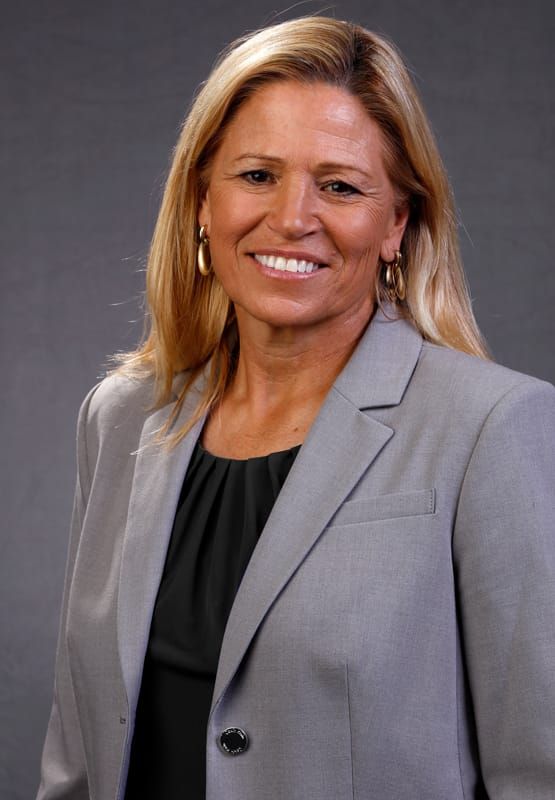 Renee Gillispie (gill-ESPY) completed her fourth season as the head coach of the University of Iowa softball program in 2022.  She was selected as the fifth head coach in program history on June 8, 2018.

2021
In 2021 the Hawkeyes achieved their highest regular season conference finish since 2012 and set a new program record with 26 conference wins.

In the circle Iowa’s ERA ranked 31st in the nation (2.34), and two of Iowa’s three senior pitchers ranked in the top 10 in the Big Ten in ERA.

In the classroom, Iowa set a program record for the second straight year with 12 Academic All-Big Ten honorees. In addition, two of those honorees – Allison Doocy and Aralee Bogar – were named Big Ten Distinguished Scholars.

2020
Gillispie had Iowa on a resurgent pace in 2020 before the cancellation of the season due to Covid-19. The Hawkeyes finished the season 17-5 and first in the Big Ten. Iowa was on pace to have its best season since 2009, that year’s team won 42 games.

In the circle, Iowa had two of the conference’s best pitchers in senior Allison Doocy and junior Lauren Shaw. Doocy was second in the Big Ten with a 1.54 ERA, while Shaw ranked fourth with a 1.71 ERA. The duo combined for 16 wins and 163 strikeouts. Under Gillispie’s guidance, Shaw earned her first Big Ten Pitcher of the Week honor on Feb. 17.

Iowa pitchers struck out the most batters in the fewest innings in the Big Ten (150.0 IP; 169 strikeouts).

At the plate, Iowa was led by a pair of freshmen in Nia Carter and Kalena Burns. In 22 games, Carter was the only Big Ten player batting over .500 (.509) and was 11th nationally. On Feb. 24, Carter became the first player in program history to win Big Ten Player and Freshman of the Week in the same week. Burns was Iowa’s power through the 22-game season. Burns led the team with five homeruns and was tied for fifth in the conference. Burns also ranked fifth in the conference in RBIs (20) and was fourth in hits (29). Burns was named the Big Ten Co-Freshman of the Week.

In the field, the Hawkeyes reigned supreme in the Big Ten. Iowa was first in the conference with a .976 fielding percentage with a conference-low 15 errors.

Gillispie helped Iowa win four weekly conference honors in 2020, the most since 2011.

Gillispie came to Iowa after 18 years as head coach at UCF where she compiled a record of 625-403-1 (.608), won five conference championships, and advanced to seven NCAA Regionals, including four straight regional final appearances. Gillispie has won the A-Sun Championship (2005), CUSA Championship (2008), and AAC Championship (2014 & 2015).

Gillispie is a native of Danville, Iowa, and played collegiately at Kirkwood and West Texas A&M University.

In 2014 and 2015, Gillispie’s staff was named AAC Coaching Staff of the Year, and in 2015 was named the All-Regional Coaching Staff of the Year.  The Knights set a school record with 50 wins that season, leading the NCAA with a 0.93 earned run average. Central Florida’s .979 fielding percentage ranked second nationally that same year. The Knights reached as high as No. 13 in the national rankings, and finished the season ranked No. 16.

Prior to UCF, Gillispie spent four years building the Texas Tech program. She led the Red Raiders to a No. 17 national ranking in 1998 and a No. 24 ranking the following season. Her team placed runner-up at the 1999 NCAA Regional.

Prior to her time at Texas Tech, Gillispie rebuilt softball programs at Bradley University and Joliet Junior College. In 1993, she took over a Bradley program that finished 12-25 in 1992, and in two years posted a record-breaking 33-8 season. The 1994 team finished in second place in the Missouri Valley Conference and ranked fifth in the nation in winning percentage.

Gillispie received N4C Conference Coach of the Year honors as head coach of the 1992 Joliet (Ill.) Junior College team that won the conference championship. She inherited a 2-29 team in 1991, and led Joliet a 32-12 record in 1992, placing runner-up at the NJCAA Regional.

Gillispie worked as an instructor with the Griffey International Gold Medal Camp, and Higher Ground Camps and Clinics under British National coach Bobby Simpson. She has served as an international speaker for the Italian Softball and Baseball Federation Coaches Convention, and traveled to Athens, Greece, as a guest coach for the Greek National Team in 2001.

Gillispie pitched in two NJCAA National Championship Tournaments while at Kirkwood. In 1981, she ranked ninth nationally as a NJCAA pitcher. Moving on to West Texas A&M University, she set nine career pitching records, including career wins, strikeouts, and saves. Gillispie was inducted into the West Texas A&M Athletics Hall of Fame in 2005 and the Danville High School Wall of Pride in 2013.

WHAT OTHERS ARE SAYING:

Former Iowa Coach Gayle Blevins:
“Renee is an outstanding selection to lead this program. As an Iowa native, she knows the history of the program, and the importance of this sport in the state of Iowa.  She is a proven leader of successful programs, both on the field and in the overall development of her players.”

Sue P. Beckwith, University of Iowa Alumni:
“What an impressive hire. Coach Gillispie brings experience, drive, vision, enthusiasm, and a winning formula.  She will make an immediate impact. I can’t wait until current and potential student-athletes have the opportunity to meet and play for her.”

Pat Murphy, head softball coach, Alabama:
“She is the perfect choice for the University of Iowa. I have known her for years, and as two native Iowans, she is one of the nicest individuals in the sport of softball. She has always fielded a very competitive team. I don’t see any reason why she won’t bring Iowa to new heights in softball.”

Brooke Banker, former Iowa softball player:
“As a proud alumni of a program with a rich history of success and tradition of producing championship teams and successful young women, I am very excited about the hiring of Renee Gillispie to be the next leader of the Iowa softball program.

“I believe with her years of experience in coaching and guiding winning teams, and her Iowa roots, she will keep the traditions of Iowa softball alive, while paving a new path for success for our current and future softball student-athletes.”