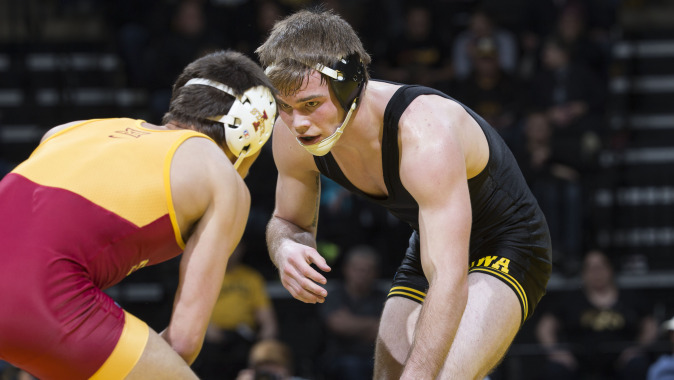 “Sorensen has made the most of an opportunity, and he has put an asterisk and exclamation mark there along the way, and that’s what you want to see,” said UI head coach Tom Brands. “If you get an opportunity, seize it.”

Sorensen has posted a team-high 22 victories, compiling a 22-2 record during the season’s first two months. After wrestling in open tournaments early in the year, he was in Iowa’s dual lineup for the first time Nov. 29 against Iowa State where he defeated Gabe Moreno, 7-6.

“He is so steady, so it’s not like he is having success and has lost eight matches before and gets hot,” said Brands. “He has the most wins on the team, and has been steady.

“(His success) isn’t a surprise to him or us, we know what’s under the hood. Now we have to keep it going.”

Sorenson says the win over Kindig — a 2014 NCAA finalist — is a confidence booster, but he is focusing on the things he didn’t do in the match that can widen the gap.

That’s the mindset of an underclassman that has big aspirations in his first season in the Iowa lineup.

“My goal is to win (the national title),” he said. “I don’t want anything short of that, and I believe I can.”

Sorensen is locked in 100 percent on Friday’s match against unranked Kyle Langenderfer of Illinois, but he knows there is a big match on the horizon Jan. 24 when Northwestern’s defending national champion Jason Tsirtsis comes to Carver-Hawkeye Arena.

“I haven’t thought of it too much,” said Sorensen. “But it will be another great opportunity.”

Friday’s dual will begin at 7 p.m. (CT) on Mediacom Mat. It will be televised on Mediacom-22 with Rob Brooks and Mike Duroe on the call. Tickets are available at hawkeyesports.com or by calling (800) IA-HAWKS.