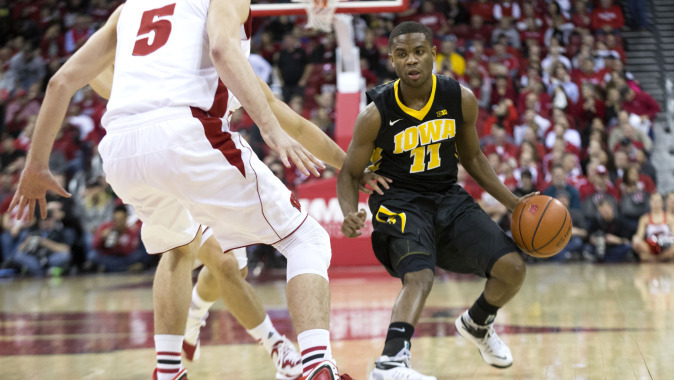 MADISON, Wis. — No. 5/6 Wisconsin made nine 3-pointers and committed one turnover in handing the 25th-ranked University of Iowa men’s basketball team an 82-50 loss Tuesday night at the Kohl Center.

The Badgers used the 3-point field goal — making six 3-pointers — to build a 35-17 lead at the break and extended their advantage to as many as 34 points late in the second half. Wisconsin shot nearly 50 percent from the floor and made 9-of-22 3-point field goals for the game. Iowa was 20-for-46 for 43.5 percent and went 6-for-15 from 3-point range.

The Hawkeyes, which entered the game averaging 17 free throws and 23 attempts per contest, went 4-for-10 from the charity stripe; Wisconsin was 15-for-20. The Badgers also out-rebounded Iowa, 37-24, had a 36-12 advantage in points in the paint and an 11-1 edge in points off turnovers.

Junior Jarrod Uthoff was the only Hawkeye in double figures, scoring 12 points on 5-for-10 shooting. Sophomore Trey Dickerson scored eight points off the bench, making 3-for-5 field goals, including two 3-pointers, and handed out a pair of assists.

After playing to a 4-4 tie over the first three minutes, the Badgers unleashed the 3-ball, using 3-pointers from Kaminsky, Koenig, and Josh Gasser to build a 13-4 lead and force an Iowa timeout at the 15:59 mark.

UI senior Josh Oglesby ended the Badgers’ 9-0 spurt with a long jumper, and Iowa trimmed the lead to 15-9 on a Dom Uhl put-back layup at the 10:52 mark. Wisconsin then took over.

The Hawkeyes trailed 18-11 with just under 10 minutes to play, but Iowa managed just two field goals for the remainder of the half, allowing Wisconsin to build a 21-point first-half lead. Iowa’s final field goal came at the buzzer when Uthoff drained a 3-pointer from half court heading locker room.

The Badgers extended their lead in the second half, despite Iowa shooting at a 61.9 percent clip (13-of-21) over the final 20 minutes. Wisconsin had an answer for nearly every Hawkeye field goal and then some.