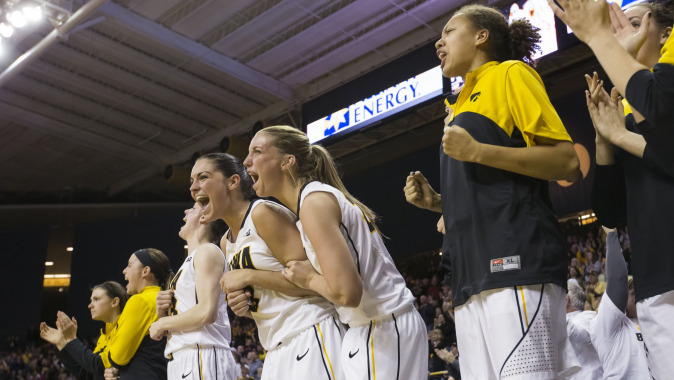 WATCH THE ACTION:
Thursday’s contest can be seen live on BTN Plus.

AUDIO COVERAGE:
Brent Balbinot and Kristi Faulkner will call the game for the Hawkeye Radio Network. Hawkeye fans can listen to the contest on AM-800 KXIC in Iowa City, AM-600 WMT in Cedar Rapids, AM-1040 WHO in Des Moines (and other Hawkeye Radio Network stations), or on the Hawkeye All-Access page of hawkeyesports.com. Balbinot is in his 11th season as Iowa’s play-by-play voice.

BEYOND THE ARC:
? Iowa senior Melissa Dixon, the national leader for the majority of the season, ranks second nationlly in 3-pointers per game (3.68). Ohio State’s Kelsey Mitchell is first (3.75).
? Dixon is first in the Big Ten and ninth nationally in 3-point percentage (45.2%).
? Dixon made six 3-pointers (6-of-10) in the win at Rutgers on Jan. 4, surpassing Lindsey Meder (261) for the most in Iowa history.
? Dixon ranks fifth in Big Ten history with 280 career 3-pointers.
? She scored 31 points in Iowa’s win at Drake on Dec. 21, making 10 3-pointers (10-of-14), setting a new school record. The previous school record was seven, accomplished five times in program history, twice by Dixon; the NCAA and Big Ten record for 3-pointers in a single game is 12.