Clark Out to Make a Statement 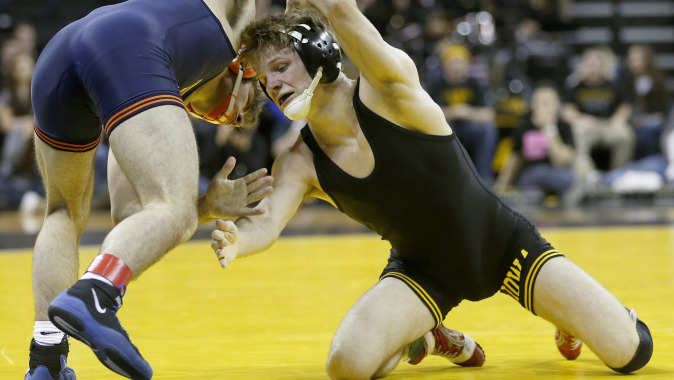 IOWA CITY, Iowa — University of Iowa 133-pound wrestler Cory Clark is out to make a statement Friday in Minneapolis.

Clark, a sophomore from Pleasant Hill, Iowa, will square off against Minnesota’s No. 1 ranked Chris Dardanes at 6 p.m. (CT) inside Williams Arena when the top-ranked Hawkeyes (10-0) meet the second-ranked Gophers (10-0) in a Big Ten Conference dual.

“It’s big, it’s the No. 1 guy,” said Clark, who will wrestle a top-ranked foe for the first time in his career. “It’s exciting for me and the team. It’s a lot more fun wrestling somebody higher ranked than someone that’s lower. It’s motivating and gives you that little extra to work for and that determination to train hard and go out and get what you want.”

Clark brings a 16-2 record into the dual. He started the season 14-0 before splitting his last four matches, falling to No. 9 Johnni DiJulius of Ohio State, 7-5, and to No. 5 Zane Richards of Illinois, 6-5, in a rematch of the Midlands Championship bout (a 4-2 Clark win).

“It’s hard taking losses,” said Clark, who is 3-2 against ranked opponents this season. “You have to be able to have a short memory and move forward. You need to pick up what you did wrong, realize why you lost and what you could have done different, but not beat yourself up over it.”

Clark sees the first period as the common denominator in his two defeats. He gave up two opening period takedowns to both DiJulius and Richards before rallying, but he ultimately fell short.

“I’ve learned I have to go out ready to go because in the matches I lost I was getting taken down early and not late,” said Clark. “I have to be ready to go off the whistle and do the little things like hand fighting and controlling the center of the match with my positions.

“A lot of little things changed can make a big difference.”

UI head coach Tom Brands says Clark has the mindset needed to succeed, but he wants to see a greater sense of urgency out of his All-American.

“You don’t have all day,” said Brands. “It’s not a 40-minute basketball game or a 60-minute football game; it’s a seven-minute match. Seven minutes can be a long time on your opponent, but you have to use every tick of the clock in order for it to feel like a long match.

“I am not sure opponents have felt the seven minutes as long as they should feel it.”

With a No. 1 ranked foe on the docket, Clark’s preparation remains the same, but he’s focusing on starting strong and keeping his foot on the gas to widen the gap.

“I can make a statement by getting a win and going out to not only win by one, but going out to wrestle my match and control the match from start to finish,” he said. “A lot of it is going out with a killer instinct, being ready to go, and getting that first takedown.”

Friday’s dual will be televised live on the Big Ten Network with Tim Johnson, Jim Gibbons, and Shane Sparks on the call.